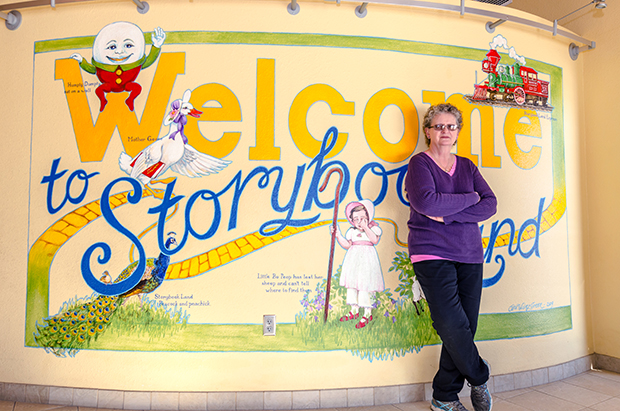 Upon first stepping through the gates of Storybook Land and into the visitor’s center, park-goers are immediately greeted by the friendly faces of nursery rhyme fame adorning the mural on the wall. Right before you embark on your Storybook adventure, another colorful painting above the door illustrates all the fun that waits along the Yellow Brick Road with Dorothy and her friends. These murals, as well as several others that bring the visitor’s center to life, came directly from the paintbrush of local artist and Aberdeen native Carol Weber Green. For Carol, fairy tale magic runs in her blood. Her father was a huge proponent to Storybook Land’s success, and filled the park with many of the beloved structures children and adults alike have come to know and love. Following in her father’s footsteps, Carol has devoted much of her life to creating art in the hopes that it will bring a smile to someone’s face.

From a young age, Carol had always been interested in creating beautiful things. When her father wasn’t working as a florist at the family business, Weber Floral, he was spending all his time building sculptures out at Storybook Land. Oftentimes, he would enlist Carol to help him paint. Through his handiwork, the shoe, Cinderella, the carriage, the horses, and even Humpty Dumpty came to populate the park. According to Carol, there was nothing he couldn’t make. “He made his own hunting equipment and bows, did his own taxidermy, and taught himself to sew,” Carol recalled. “He taught me not to put boundaries on how creative you allow your mind to be.”

Carol took that to heart, and has since created artwork for many people on all different kinds of surfaces. She paints on just about anything she can find, from wood to handmade paper and even eggshells. Currently, Carol spends much of her time painting shoes as a part of collaborative effort with Bur-Mar’s in the Aberdeen Mall. People have taken quite enthusiastically to the hand-painted shoes, and now she frequently receives custom orders, both locally and across the country.

In fact, a vast majority of Carol’s work is commissioned. In addition to the murals at Storybook Land, she also illustrated several large murals for Sanford Children’s Hospital, the Angel House in Aberdeen, and even in people’s private homes. Carol says she enjoys doing commission work because it poses a never-ending challenge that allows her to learn something new each time. “I have to learn to make things that other people have in their minds,” she said. “I usually have to do lots of research ahead of time, and there’s always something different I have to learn.”

However, painting for others is more than just a task to be completed for Carol. “I love to paint, and I like selling my paintings so I can make more. I want to express beauty in everything I create, to make things that are positive and make you feel good to look at.”

Although Carol has never had one specific focus in her art, in the future she hopes to work more extensively with religious themes in various mixed media.

In everything she creates, she remembers the wisdom her parents imparted to her by example. “They taught me to make things as well as I possibly can. Creating art never gets tiring to me.” // – Becca Simon