What's New
All That Glitters
By Becca Simon | March/April 2017 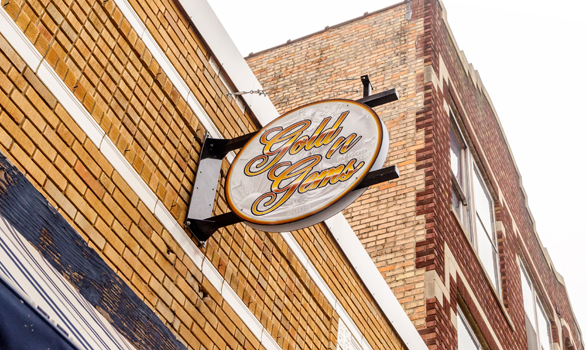 What may be one man’s trash is another man’s treasure. For the folks at Gold N’ Gems located at 303 S. Main, this old idiom is the philosophy that fuels their business. From money, trade beads, to war militaria, they are all about preserving the past and making old new again. They have a little something for everyone, from people looking to fill their homes with vintage furniture to investors who want to diversify their money into gold and silver.

Owners Cheryl Nelson and Andy Heinze initially started the business for investors, seeing the many benefits of investing in precious metals. Unlike other paper investments, people have more control over gold and can cash it whenever they see fit. “It also makes awesome gifts,” Cheryl explained. “I get all my grandchildren started in it by buying them two ounces a year. Toys break. They outgrow clothes. But this is investing in their future.”

However, it wasn’t long until they met Dale Fliehs, a collector of war memorabilia that has helped transform Gold N’ Gems into the diverse business it is today. Dale collects US and foreign militaria, including field gear, edged weapons, firearms, uniforms, flags, and more. He has collected objects from as early as the Revolutionary War and is constantly looking to expand his collection.

Oftentimes, people will come into the store looking for things from World War I or World War II since they had family involved. One look around the store, and you will see all kinds of unique items from bygone eras: a 1890 NCO non-commissioned officer’s helmet, Civil War swords, knuckle knives from WWI, and Buddhist prayer flags, just to scratch the surface. Some of the rarest guns have sold for over $4,000.

But war militaria aren’t the only artifacts worth a substantial sum of money. Any old artifact can be worth hundreds or even thousands of dollars, depending on its rarity. Gold N’ Gems gets many of their items from estate sales. Most of the time, people have no idea how much money their things are worth. A koi fish brooch, crafted to resemble faux coral on gilded brass metal in the early 1900s, sold for $500 due to its rarity and popularity. The famed Neiger Brothers of the Czech Republic, prolific designers who were killed at Auschwitz in 1942, made the brooch. However, the family that owned it knew nothing of its history or its value.

The same is true of old currency. A $20 bill, minted at the First National Bank of Groton, South Dakota in 1902 sold for $3,000 and a $1 Lincoln Greenback—the only one currently known to exist—sold for $7,500. Andy has just about every coin you could think of and then some, from the first coins the US ever minted to pre-Civil War fractional currency that could still be used as a legal tender even today.

“This place is  like a walk-through history,” Cheryl said. “People come in here and they don’t just leave in two seconds.” Even if people aren’t interested in collecting or investing, Cheryl also carries vintage jewelry and even designs custom jewelry to fit customer’s tastes.

For Cheryl, Andy, and Dale, one of the most enjoyable aspects of running their business is the people they get to work with. “It’s the treasure hunting with the people that come in,” Andy said. “I would say over half do not even know they have something valuable.” // – Becca Simon