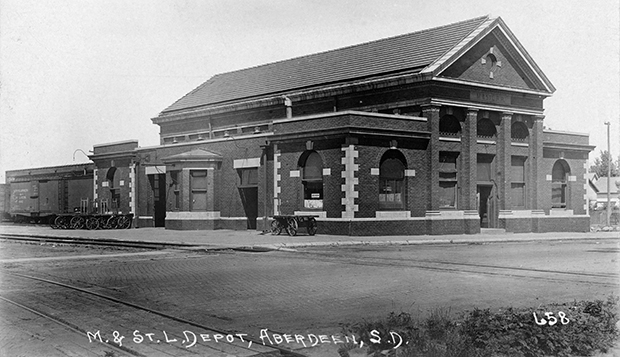 The Story of Aberdeen’s First and Last Depot

The last to arrive, the first to leave. This was emblazoned on an Aberdeen News front page six decades ago, referring to the Minneapolis and St. Louis railroad company. The line always had something to prove, as did its depot, as it was and is habitually shadowed by the larger, better known depot on North Main. Some know it as it stands today: a remodeled CO-OP Architecture building full of offices. Others associate it with the booming Hub City of yesteryear; a simple reminder of Aberdeen’s booming beginnings. Still fewer remember it as a nighttime hotspot for young college students experiencing their first real taste of freedom. An oft-forgotten neoclassical structure completed shortly after its rails began construction, the depot on South Main has a rich and enduring history that not even a lot of life-time Aberdeenonians are aware of.

The line was developed in direct response to a local need. One newspaper article from 1906 claimed the year was on track to be the biggest in history of immigration into the state. The small line began originally as a way to connect the Twin Cities with Peoria, Illinois. Branches were eventually added to Iowa and South Dakota, and then through Aberdeen, 25 years after the Chicago Milwaukee. It cost the company $55,000 to enter the city just west of the current Northern State University, where its depot still stands today, at the southwest corner of 11th Street and South Main Street. The automatic tracklayer began to connect the line that began in Conde in November of 1906 to dozens of eager local onlookers. The Aberdeen stop had a depot, roundhouse, and car repair shop, and together they competed vigorously with the larger Chicago Milwaukee line.

Can you picture it now? Oak veneer finishes, brass plates, painted plaster ceiling squares made by the Architects Decorating Company of Chicago. Red and white checkered floors on which anxious travelers and excited welcomers alike paced back and forth in anticipation. “A distinction for the city,” read the newspaper, “the finest in the state.” With its lobby and ticket office, three waiting areas, toilet rooms and a large section for baggage, the M. & St. L. Aberdeen depot truly was full of cutting edge technology.

In fact, the railroad might not get the credit its due. Though it was the shortest-lived railroad in Aberdeen, the depot was deemed historically significant and placed on the National Register of Historic Places in 1969. Because of its line, many towns near us today exist: Florence, Wallace and Stratford, to name a few. Home seeker specials on rates encouraged new settlers to make the move to South Dakota, with round trips for a low price of $15.

Still, this wasn’t enough to save the railroad — or its depot — and it would send its last passenger trains in 1949, nearly 50 years after its first. Hauling only freight, it was put up for auction 42 times in the early ’40s with no bidders, and little by little the line was abandoned. The Chicago Northwestern railroad bought it in 1960 and began to lease the depot out to local businesses. Less than a decade later, it was sold to private investors, which is when brothers Ray and Raeph Mak took over.

In 1968, under Mack ownership, the long-unused depot building became The Depot Club, a nightspot still revered with a quality of nostalgia reminiscent of “the good ol’ days” by all those who tell its story. From the moment it opened, the Depot Club was a wild and crazy place that filled up early and stayed packed late. With rock n’ roll music performed by local bands rattling the building every night, the bar was primarily a place for young people to meet and dance the night away. Beer was sold by the pitcher, and everyone came to party.

Some of this is according to Aberdeen Mayor Mike Levsen, who personally experienced the glory days of the Depot Club on South Main. “For young people who wanted to meet people of the opposite sex, the Depot was it,” he explains with a laugh.

Of all the bars at the corner of 11th and Main back then, the Depot was by far the most popular for students. Rain or shine, it was always a good time. “There were times when there would be blizzards and school would close, and yet the students would fight their way through the snow and spend the whole day at the depot,” Mayor Levsen says, remembering how students carved paths through the snow in order to make it through campus and to the bar. “So after that happened a few times, the school just stopped calling off classes. They said if they can find a way to the Depot, they can find a way to class.”

Most every student at Northern was able to enjoy nights at the Depot around the late ’60s. This was back when the drinking age was 19 and 3.2 beers made their debut. As Mayor Levsen explains it, “Imagine any of the bars you have now and then add in freshmen and sophomores.” The Depot Club was at its height around the time of the Vietnam War. Students enrolled full time did not have to join the effort overseas, so Northern saw a huge increase in student population. The Depot became a haven for students at this time of change and turmoil in the United States. In fact, Mayor Levsen got the news of Dr. Martin Luther King Jr.’s assassination while he was at the Depot. “It was in the middle of the Vietnam war protests, in the middle of the civil rights movement,” he remembers. “It was all during that time, it was really a time of young people valuing their freedom to express themselves.”

Whether it was because of those liberal, changing times, or simply due to the lasting effect the club had on young people, we’ll never know, but the Depot Club made a permanent mark. On April 21-22, the Depot Club will be inducted into the South Dakota Rock and Roll Music Association’s Hall of Fame in Sioux Falls. But like all good things that must come to an end, the depot building ran its course as a nightclub. As to when exactly it closed down, Mayor Levsen couldn’t quite recall, saying with a laugh, “You know, I don’t know, I got married.” After a few years, the original Depot Club would become other bars, none as successful as the first. The Station House, The Dance Machine and The Rail Station would all have short lifespans, because by 1980, all club activity had stopped. After a decade of vacancy, the building was leased out again for business purposes. A remodel in the last five years updated the inside, leaving only the exterior as a clue as to what the building once might have been.

Though it’s no longer a nightlife hotspot, nor a bustling travel hub, the depot remains a significant landmark in Aberdeen. Today, the M. & St. L. depot stands as a reminder of what our town once was and as a pillar to the test of time, just as we are. A reporter back in 1907 said it best: “Altogether the depot will be one of the most imposing buildings in this part of the state and when it is finished, will give the south end of Main Street a distinction that will impress strangers entering the city from the south and all who come in over the M. & St. L.” // – Erin Ballard