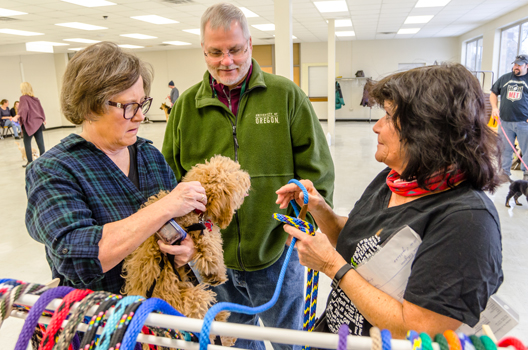 As you walk into the K-9 Obedience course at the ARCC, you are immediately greeted by a flurry of spry puppies of all shapes and sizes. They romp throughout the room, introducing themselves to their furry classmates in the form of a friendly sniff to the behind, trip over their own paws, and lick your face when you stoop down to introduce yourself. Some of the more timid students hide behind their owner’s feet, venturing a shy sniff anytime a fellow dog goes up to meet them.  After a while, when the dogs have begun to quiet down and their owners have taken their seats, instructor Patsy Brosz opens with a sobering question: “The dog you have here tonight would most likely, without even thinking about it, throw himself in front of danger and give his life for you. How many of us here today would return that phenomenal favor to their dogs?”

While this may be a difficult question, Patsy starts her class this way so everyone understands just how important it is to treat your dog well. K-9 Kindergarten is training for the handler just as much as it is for the dog. Patsy provides owners with the tools to raise a better, happier dog, but it’s ultimately up to the owner to put them to use. For Patsy, there is no greater joy than seeing people that want to succeed with their dog.

In fact, Patsy got into the dog-training scene because she was once in the same shoes as the people currently attending her course. After taking her first German shepherd, Greta, to the only obedience course in town at the time, she was shocked by how quickly her puppy was able to learn. She often helped out during the classes, and it wasn’t long until the ARCC contacted her about teaching her own class. While hesitant at first, she decided to take the plunge, and has been leading K-9 Kindergarten for 12 years since. “It’s really turned into a labor of love,” Patsy recalled fondly.

Although advertised as an obedience course, the class is really about introducing puppies to the other dogs and people that inhabit their world. At the beginning of class, they do a meet and greet exercise to help the puppies know that meeting other dogs is a good thing. “They get up and sniff the first pup, kind of like the waltz,” she said. “Sniff two, three… sniff two, three… until they’ve sniffed all the puppies.” They also do another exercise called Pass Your Puppy, in which owners exchange leashes with the person across from them to stress the importance of treating other dogs the way you’d want your own to be treated.

For dogs that may be on the shyer side, Patsy advises bringing their favorite treats and sitting with them and petting them for 10-15 minutes and then going home. “Let them know this is a good thing. I got treats, I got petted, and then we went home. Socializing and desensitizing is one of the most important things you can do for your dog.”

If dogs aren’t socialized, Patsy warns, more often than not, the dog will be a bit dicey or cagey around other dogs. “They’re scared,” she said. “If a dog isn’t used to being around other dogs, it might act like its aggressive, but its not. The majority of bites that are delivered are fear based.”

The other primary focus of K-9 kindergarten is communication and how to read body language. While dogs not may speak English, Patsy emphasizes that there doesn’t have to be a language barrier if we know what to look for and learn to communicate properly. “There are things your dog does that shows you she knows what you want, and you know what she wants,” Patsy explained, describing this intuition as a kind of sixth-sense. “It’s almost like telepathy. They can tell what you’re thinking. If you’re sitting in a chair reading the American News, and you see your puppy come trotting down the hall with your new purple suede shoes, you might be a little angry. You don’t say anything, you just look at that puppy, lean forward in your chair, and that puppy is gone.”

In addition to body language, dogs also understand the intonation of your voice. “I took Greta up to Brentwood Colony and I said, ‘Do you think she knows German because she’s a German shepherd?’ So I said, Greta, ‘Sitz.’ And she plopped down. They can tell the difference in your voice.”

To help her class understand body language, Patsy gives them a list of red flags that they want to avoid, including lunging, growling, and bracing. Instead, she encourages green flags, in which the puppy goes up to another dog and play bows, meaning they are inviting that dog to play. “Look at the ears, oftentimes dogs will lay them back real sweetly. Look at their eyes, their mouth, and their body. How are they walking, are they all wiggly? Is the tail wagging?” They also look for orange flags. If a puppy hides behind their owner, it is called deference or avoidance.

If an owner doesn’t pay attention to their dog’s body language, especially while walking their dog, fights can break out. “Watch what those dogs are doing and let them sniff each other. Sniffing the butt is the Emily Post of good manners.”

When asked what a typical day in K-9 Kindergarten is like, Patsy said with a laugh: “Barking.” After having owners walk their dogs around for a while, they begin with the obedience command they plan to work on that week. They start with loose-leash walking, working to keep a loop in the leash to ensure the dog is staying close, and then move onto the “Sit” and “Down” commands. By about the fourth session, Patsy brings in agility equipment for the dogs to practice with.

According to Patsy, the only thing standing in the way from a dog doing well in her class is how much the owner is willing to work with them. If owners are complacent, their dogs aren’t as likely to respond to training. When commanding them, Patsy stresses that it’s important to be firm while still being a loving leader. “Praise them,” she said. “They love hearing your voice.” Because the training is all about positive reinforcement, she suggests taking treats and squeaky balls with you everywhere you ago to reward good behavior and avert potential problems. If people take anything from her class, Patsy hopes that it’s learning how to love and respect their dogs, even more than they did before. “To me, the dog is a whole different human being,” Patsy said. “You have to respect that and not turn that dog away. For example, if your dog is chewing your shoes, put them up. Puppies learn their world by chewing and tasting. If your dog has an accident in the house, it’s not the dog’s fault. You weren’t paying any attention. When you take a puppy and grab it by the scruff of the neck and shove its nose in the poop pile, you are punishing it for doing something that comes naturally. Would you do that to a child?”

Patsy would highly encourage everyone who has a puppy to attend to her class. Not only is it an educational experience, but it’s also something for owners to do together with their dogs. K-9 Kindergarten has two six week sessions that last one hour a week. Saturday classes are from 10:00 to 11:00 AM, and Wednesday classes are from 6:30 to 7:30 PM. The class costs $75 plus tax, a rate that is nearly $100 cheaper than classes in other cities.

In her last class, Patsy hands out a sheet of paper to everyone in her class filled with thoughts she hopes everyone takes into heart, and she tells them: “Never, ever surrender your dog. Your dog would never surrender you.” // – Becca Simon