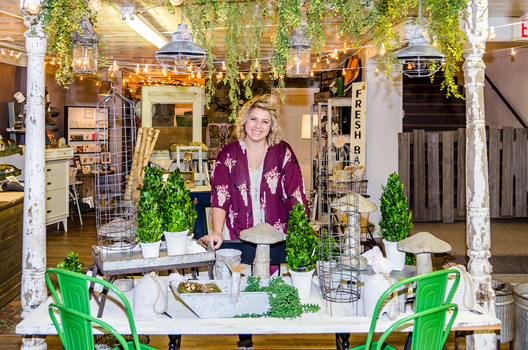 What began as a reason to provide a beloved brand of paint products to the Aberdeen community turned into something much more in the basement space of Karisma. As it turned out, acquiring and selling Annie Sloan chalk paint was only the beginning for Nichole Heinz, sole owner of Lost and Found Occasionals, a small shop that features handmade, vintage and vintage-inspired décor and gifts, as well as chalk paint classes and workshops. Since August 2016, Nichole has been juggling being a first-time business owner with being a full-time mom, and she doesn’t plan to slow down any time soon. “It’s a lot of work, but it’s fun,” she laughs. “It’s so exciting to create things and be able to sell them.”

Some of the items that you might find on any given day at Lost and Found Occasionals include “57401” burlap throw pillows, decorative metal baskets, hand-painted signs, and lots of greenery, to name only a few. Anything that could be described as farmhouse décor either already has or soon will find a home at the shop. But if you’re looking to make a purchase, you better move fast. Not only are many items at the store one-of-a-kind, but Nichole also rotates her inventory quite frequently. These are some of the things that make her shop such a unique experience; you might not see the same thing twice, ever.

While Nichole personally makes a lot of the items she sells, she’s also in charge of everything else that it takes to run the store, including wholesaling items and staging, the latter of which is one of her favorite parts of the job. “I think that people anticipate the visual aspect of things in the store. [Recently] we had this big reset and I built new structures for staging and redid the whole thing,” she explains. “So I think it’s an experience too, to just come down and look at everything.”

When customers “come down,” it’s from Karisma, the upstairs clothing store owned by Melissa Larson. It was Melissa who invited Nichole to move into the basement, and it’s a decision that both businesses have benefited from. “We work together as a team to create a one-stop-shop experience for people,” Nichole explains. “It’s awesome and it’s so fun… to be able to grab a glass of wine upstairs and come down here and do a painted class, or come down here and shop. It’s just ideal. They go hand in hand together.”

Nichole credits the foot traffic from Karisma as one of the best perks of Lost and Found Occasionals’ location, though just being downtown and having the support of other business owners has been equally important to her success. “It takes a village, it really does,” she says, smiling. “In the beginning, I thought I could do it all myself, but you can’t, it’s just not possible.” Of course, it goes both ways. When new businesses open up downtown, Nichole is quick to lend a helping hand. “I think it’s so important to provide support; even just participating by donating a gift card to be given away, or sharing their posts on Facebook. I’ve lived in different cities and communities with thriving downtowns that you can spend all day at. I can see that happening in Aberdeen. It’s just going to take one step at a time, one person at a time,” she says.

In the future, Nichole hopes to get even more involved in downtown and community events. That might include organizing a festival of sorts that would feature items similar to what she sells now from vendors all over the state. For now, her focus is mainly on keeping the store as full and ever-changing as possible in order to keep those “oohs” and “ahhs” coming from customers first walking through the entryway. And seeing as the shop allows a much-needed creative outlet in her busy life, Nichole only expects progress for Lost and Found Occasionals. “It’s amazing how much it’s changed since I first started. I’ve already learned so much just in six months,” she says. “I anticipate more growth and changes as I’m growing and changing myself.” // – Erin Ballard