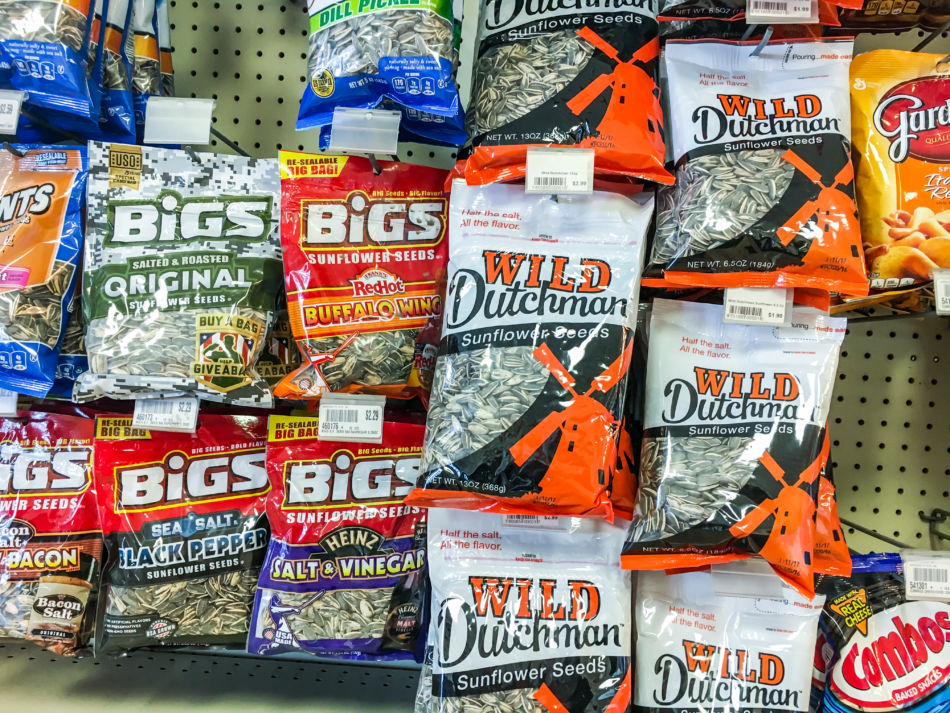 Spring is upon us. It’s easy to tell. It’s not the return of robins, leaves, or longer days. Not pot holes or mud. The real first sign of spring is the arrival of shelled sunflower seeds on the ground. It’s a sign that male seed-eating humans have come out of winter hibernation. They’re easy to spot. I’m one.

For me, seeds were always a good weather treat, something you ate when you could be outside. I’m not sure I ever ate them inside growing up — I was wise enough to know I couldn’t spit them just anywhere, but outside I could spit them everywhere — although spitting them out of a moving car window usually backfired.

As a kid, I loved to walk to the little grocery store with one or two pop bottles, get the deposit on them, and buy some Fisher sunflower seeds. Those small wax paper packages were an icon of my youth, and they sometimes stayed in my pocket for days. I could buy them at the baseball concession stand and the golf course and I could take them to the lake or the keger.

I’ve eaten sunflower seeds for about 50 years, learning early as a South Dakota boy how to shell a mouthful as opposed to a seed at a time (One at a time? Really? You might as well drink one beer. Lifting one seed at a time to your mouth, and, worse, removing each individually with your fingers to delicately flick it like something icky? How efficient is that? Sad!) The process is really both art and science and so fluid that it’s hard to describe — like the beauty of a sunset. I throw a dozen or so into my mouth and move them into the pocket between my left cheek and teeth. Then I maneuver one seed at a time across to my right molar — the tongue is crucial here — rotating it so that I can bite down on the edges, which cracks the shell — preferably audibly (besides seeming fresher, it sounds so cool!). This releases the seed that, with the agility of an astronaut snatching a spacewalking colleague hurtling through the great void, my tongue catches. And I eat. At the same time, I push the shell remains into the right side of my mouth and, when that cheek achieves critical mass, I spit. Repeat. A breathtakingly complicated process yet elegant (ignoring cracked shells and saliva) — and almost completely unconscious. In fact, thinking about it might make you stumble. Interesting how many things can be messed up by thinking. Like voting.

Moderation is important though, or so I hear. You have to be careful about eating too many. Rotating seeds to be cracked and moving broken pieces around can cause little cuts on your tongue, which get irritated by the salt on the seeds. Little welts develop, and your mouth goes dry and raw. But the getting there is worth it.

I rediscovered this teen staple when I was in my 40s after returning to South Dakota from the East Coast. Living in the city, seeds didn’t occur to me as much. I must have gone years between mouthfuls, then I became reacquainted with a vengeance. I devoured the seeds, and my mouth and tongue hurt for days, but I returned to seed shape. I also remembered that manners aren’t really necessary. Once, however, while watching our son at a youth baseball game, I managed to spit some shells that landed on my wife’s sandaled feet. (Why was she wearing open toes in April anyway? Call the fashion cops!) Manners are sort of necessary.

In the years I was away from seeds, they had changed. The paper Fisher packs disappeared (the old Fisher did too, bought out by another company; they kept the Fisher name, but recently stopped selling seeds — and they don’t know anything about the paper packs and seemed a little insulted to be asked). Other brands cropped up with seasonings and flavors. Well, okay, but the traditional roasted and salted remains the best. I had also changed some while I was away (no, I don’t mean marrying the seed police). I developed high blood pressure, so I tried the unsalted variety. Once. It’s a chance I’m willing to take.

I also learned to chew indoors and spit into cups. It seemed a little unnatural, but it was the 21st century. These spittoons worked in the car too, although my eagle-eyed wife still finds remains around the car — sometimes with an air of disgusted superiority; sometimes a sigh.

Being a father, I took on the sacred duty of initiating my sons into the manly Dakota art of shelling seeds in your mouth. It’s hard to teach. The men in my family have the strange and uncommon ability to wiggle our ears. I repeat, manly. Such skills must be handed on somehow, and my boys came into their own.

Fortunately so. When I picked my oldest son up from college after freshman year, we started the 14-hour drive back in late afternoon, planning to drive overnight. On that trip, my son taught me about sunflower seeds’ unadvertised — and not FDA-approved — magical effect of keeping you alert and awake. Doubtful, I nonetheless loaded up on seeds, and it worked for about 12 hours. If I got tired, I popped some seeds and got recharged. Being a man, I was trying to drive straight through by myself. At around 4:00 AM about 20 miles east of Big Stone City, my mouth raw from too many seeds and no water, I couldn’t eat any more, and my head nodded. “Dad!” my son yelled, keeping us out of a swamp. Seeds are lifesavers — not the only lesson learned on that trip.

So stand up for green grass, spring training, and spits. Like every year, sunflower seeds are making America great again — again. Just watch where you step. // – Patrick Gallagher