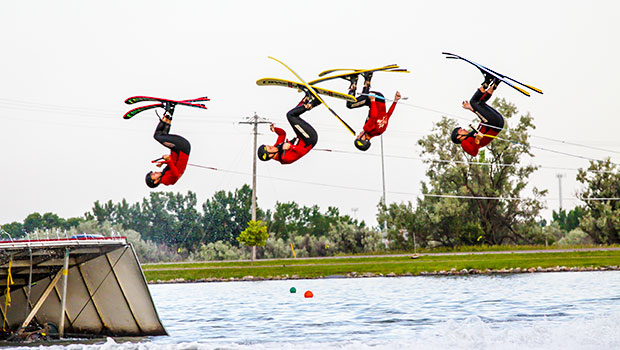 The Aberdeen Aqua Addicts Water Ski Team has entertained audiences for over 20 years with their summer performances on the lake. This talented group is known for their high-energy shows featuring stunts such as human pyramids, barefooting, ski jumps, and ballet, to name a few. They competitively compete each year on a regional level, have contributed members to Team USA and world championships, and so far have produced five professional water skiers who now ski for Lego Land, Sea World, and Tommy Bartletts. At the same time, a huge part of their organization revolves around reaching out to the community, teaching others how to water ski, and involving youth and families. They have specific days this season set aside just to teach newcomers how to ski. Their Junior Team, made up of beginners to the sport, has their own practices and also gets the chance to try out new skills during the team’s weekly summertime ski shows. It isn’t unusual for a parent or even grandparent to ski alongside their kids in a performance.

Current co-show director Taryn Ryckman had never even attempted to water ski when she joined the team during its initial year in 1995. She said the group didn’t have any official shows during that first year. “It was just us simply learning to ski and getting members together. We had a lot of interest and people who wanted to ski and we were trying to see what we could do.” The group continued practicing, and after traveling to regional water ski competitions to see what was out there for the sport, they decided that it was definitely something they wanted to be involved in. The following summer, they held their first official performances at Mina Lake, and after that, participant numbers and interest in their organization quickly began to grow.

Over the years, the team continued to perform in shows held mostly at Wylie Lake, compete in tournaments, and expand. Their own space to practice, perform, and host bigger events was a goal that finally came to realization in 2012 when they were able to acquire Dahme Lake, a gravel pit located about 2 ½ miles south of Aberdeen on Highway 281, with the generous help of longtime Aberdeen community member and sports fan Gary Dahme. Gary sadly passed away in October of 2016. Founding Aqua Addicts member and show director Todd Thorson says that Gary was instrumental in the team being able to have the great location that they do now. “We wanted to have a facility for the community and Gary bent over backwards, in time and effort, to make that possible. His honesty, integrity, and generosity are what we as an organization hope to carry on.”

Members of the Aqua Addicts are quick to tell you that in addition to water skiing itself, what they love most about being on their team is the ways in which it has allowed them to give back. Thorson said his favorite day of the summer is their annual Escape to the Lake Adaptive Water Ski. This event gives people with any kind of physical or developmental disability, who normally would never have the chance to water ski, an opportunity to do so. Participants ride in a wheelchair accessible seat alongside other skiers and get to experience the joy of being on the water. The team is also holding two Learn to Ski Days this summer, in which they will provide all the equipment needed and teach anyone interested, from young children to adults how to water ski. Thorson adds that their group works hard to provide a safe team environment for youth from Aberdeen and the surrounding areas. “We’re most proud of making kids’ dreams come true and teaching them a lifelong skill.”

The Aqua Addicts will begin their 2017 season on Thursday, June 8 at 7:00 PM, with their opening show at Dahme Lake, and will continue to perform shows every Thursday evening throughout the summer months. The team began working on their upcoming season back in February by practicing their routines and choreography indoors at Trinity Lutheran Church gym. They will also host the Midwest Regional Show Ski Tournament at the end of July. The tournament, which is free and open to the public, will bring about 600 of the best water skiers from across the Midwest to Aberdeen for three days of competition. Contenders will be attempting to qualify for nationals and performing their best group and individual freestyle routines during the event. Thorson describes an evening at one of their shows by saying, “We have a really fun, relaxed environment where people can come out and just sit on the beach or in the bleachers and enjoy the night.” // – Jenny Roth

More information on the Aberdeen Aqua Addicts Water Ski Team, including a calendar of events for their summer shows and programs, is available on their web site at www.aquaaddicts.org.