Art & Culture
Worth Gobbling About
By Becca Simon | May/June 2017 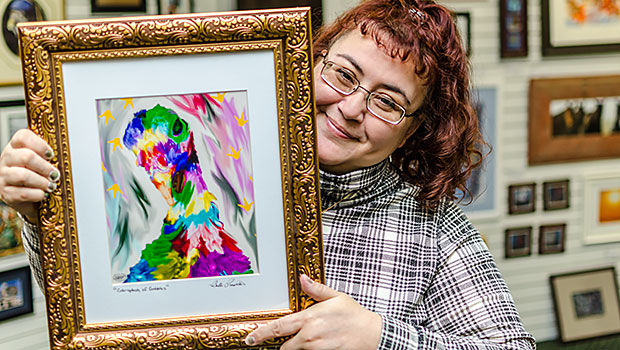 Bobbi Piasecki has always loved writing stories. She taught her children to read by writing stories with them, and has devoted much of her life to advocating for children’s literacy and childhood education, both in South Dakota and nationwide. An inspiration for a story can arise from virtually anything, from day to day mishaps to family members and more. However, nothing has inspired her quite as much as Gobbles, the charismatic turkey and honorary family member that serves as the subject of her first books.

It all started when Bobbi’s husband Chris noticed that the wild turkey flock near where he worked had suddenly disappeared. A turkey chick was crying out from the bushes, where Chris found that a nest had been destroyed. She was no more than a couple days old at the time, so Chris brought her home in an attempt to save her. However, they knew that once that they had taken her out of the wild, they couldn’t put her back. So, after her nursing her back to health, Bobbi tried taking her to several different bird sanctuaries and farms. But the little turkey didn’t have any intention of saying goodbye. Bobbi and her son were just beginning the drive home after dropping Gobbles off at a hobby farm when all of the sudden she appeared in the rear view mirror, running at full speed out of a cloud of dust after her family. “That’s when I realized we were going to be stuck with this bird forever,” Bobbi recalled with a laugh.

Since becoming a part of the family, Gobbles has earned the title of “Diva Turkey” and created quite a reputation for herself. Although she primarily eats wild bird food, she has taken to thinking she is a human, and demands only the best of the best. She loves to eat everything that Bobbi eats, from chili to chocolate and even spaghetti, and follows her around wherever she goes. When Bobbi gets up in the morning, Gobbles thinks its preening time. “Every action I do, she kind of mimics in her own way. You wouldn’t believe it,” Bobbi said. In addition to dust baths, Gobbles also enjoys bubble baths and has a giant pink stuffed bunny rabbit that she sleeps with every night. Bobbi utilizes her in almost every aspect of her art, from photographing her to using her feathers and eggs in various art pieces.

Although Gobbles is a delightful feathered friend and addition to the family, Bobbi wants to make it clear that wild turkeys don’t typically make the best pets. “She is undeniably one of a kind,” she said. “We must remember that she will always have a bit of wild in her, and she can only be cared for by those who have a great deal of knowledge in wildlife care.”

Since her adoption, Gobbles has created fans all the way from Timber Lake to Watertown and Sioux Falls and starred in several of Bobbi’s photography series. The first was the Masterpiece Collection, in which she dressed Gobbles and digitally painted the backgrounds so she could appear in her own versions of famous works of art such as Gobbalisa and Turkey with Pearl Earring. The second was a tribute to old Hollywood, featuring Gobbles as Marilyn Monroe and “Gobblezilla”. The third is an Old West series that is still in the works. “When the ideas hit me, I have to start working right away,” Bobbi said.

That’s why, when the idea struck to turn Gobbles’ story into a children’s book, Bobbi got to work immediately. She already has two books in the works: the first is Gobbles: A Turkey Tale, which is an excerpt of Gobbles’ daily life, and the second is Gobbles from Field of Fame, which tells the story of how she came to live with Bobbi’s family and her rise to glory. Rather than try to apply to thousands of publishing agencies, Bobbi decided to start her very own publishing company: Creative Thunder Publishing and Art. She has already received the funding to do it, and is in the process of acquiring the necessary equipment. Both of Gobbles’ books will be for sale at the Artworks Gallery in the Aberdeen Mall, as well as several other locations including the Storybook Land gift shop and the Dacotah Prairie Museum.

While Gobbles may be the star in many of her books, Bobbi is also passionate about creating Native American children’s books. During an after-school reading program she created, one of the children asked her why all of the books showed Native Americans in their dancing outfits and regalia. “I realized that it’s really hard to find anything contemporary that they can relate to better,” Bobbi explained. An avid activist of early childhood education, Bobbi attended many state and national conferences and discovered that none of the teachers she spoke to had any modern Native American literature to use in classes. “So I decided to write my own.”

Although writing takes up much of her time these days, Bobbi is equally as passionate about photography. She especially loves photographing animals, noting her special knack for photographing them. “They just stop and pose for me,” she said, laughing. “Especially wild animals, which is ridiculous. While I was taking senior pictures for one of my cousins, a little squirrel ran out and stopped in the middle of the sidewalk and posed, and I took his picture. It’s kind of like being an animal whisperer.”

Bobbi’s forward looking attitude to her art and life in general stemmed partially from her time at Oprah’s Women Rule! conference, an event featuring 80 up and coming women leaders in the nation. This life-changing event taught her two simple words that she always keeps in the back of her mind: Just ask. “What can it hurt? That’s been my motto ever since,” Bobbi said. “It’s gotten me so many wonderful opportunities that you wouldn’t believe. Overcome your fear and just ask.” // – Becca Simon