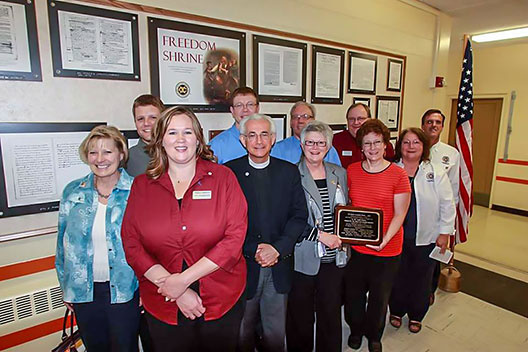 Pieces of United States history are on display in freedom shrines located throughout Aberdeen. Freedom shrines are simply collections of copies of over 20 significant historical documents such as the Declaration of Independence, Bill of Rights, Emancipation Proclamation and many more. Over the years, the Aberdeen Exchange Club has dedicated about 15 of these historical displays to various places throughout town.

One of the freedom shrines is at the South Dakota School for the Blind and Visually Impaired and has document titles, as well as the entire Gettysburg Address, written in braille. It is the only freedom shrine like it in the entire country. Students at the school are able to read document titles in braille and then access computers to use voice over and screen reader technology to learn more about them. Marje Kaiser, the school’s Superintendent, said having the freedom shrine along with their modern technology puts the historical documents in peoples’ hands. “It helps to give kids the idea that at one point these were real paper documents that someone sat down and created and also helps us to preserve them.”