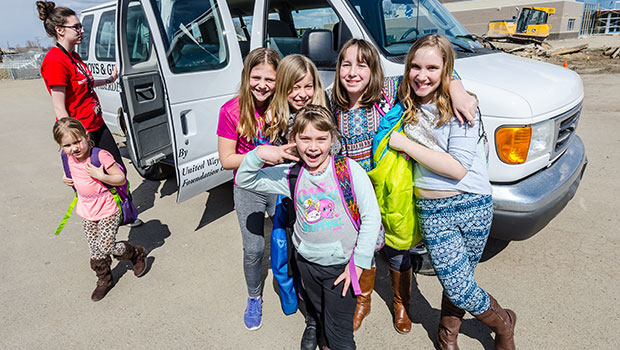 Part of what makes Aberdeen so special is how devoted our community is to helping one another. To see this, you have to look no further than the multitude of nonprofit agencies around town that are devoted to providing community members with helpful services at little to no cost.

Where would we be without the Salvation Army, who provides countless individuals with food, shelter, clothing, and kindness? What about the Boys and Girls Club, which gives children a safe, affordable place to go after school, or SPURS, the therapeutic riding center that assists in client rehabilitation? All of these organizations play key roles in making Aberdeen the community it is, but providing these services wouldn’t be possible without a little financial assistance. That’s where United Way comes in.

For over 85 years, United Way has been assisting 16 local health and human service agencies that serve as the backbone of the community. Every year, they allocate about half a million dollars to each of the 36 respective programs within those agencies. Despite the Northeastern South Dakota branch being relatively small, it brings in a hefty $740,000 annually.

In 1985, the United Way Foundation was created as a separate entity to provide grants for their partnering agencies that extend beyond their typical annual campaign. This money comes from bequeathed gifts, and currently has a corpus amount of just under a million dollars in it – something that’s very atypical for a United Way our size. The grants are typically one-time monies used for something special that the agencies may not be able to acquire otherwise due to lack of funds.

According to Aaron Schultz, Executive Director at United Way, the Foundation has come into its own in the past 10 years. Since 2010 alone, $250,000 in grants has been allocated out. “It’s a wonderful thing to have because of all the unique opportunities we’re able to fund,” Aaron said. “The Foundation is that quick one-time opportunity that a lot of our agencies want. There have been some really neat stories that have come out of the grant program we have here.”

Last year, for instance, SPURS was able to purchase Cheyanne, a specially trained therapeutic riding horse that also smiles on command. Since most of horses out at SPURS are donated, they typically aren’t trained or are already nearing the end of their lives. The opportunity to acquire a young, trained horse that they don’t have to pay for themselves is one that doesn’t come up very often.

One of the earliest purchases the United Way Foundation helped make possible was a security system for Safe Harbor. Not long after it was installed, their windows were broken, and the security system was instrumental in helping to identify the culprit.

In addition, the Foundation helped partially fund many of the vans for the Boys and Girls Club, making it possible for them to pick up around 250 kids every single day after school. This year, they also helped purchase cribs for the Youth Development Center at the YMCA as well as a speaker and a large TV for the Aberdeen Senior Center. “These are the things you don’t think about all the time,” Aaron explained. “We’re trying to help them keep costs down as much as possible.”

Future funding plans are also in the works. Although they’re still ironing out the details, United Way plans to provide support for a mobile food service the Salvation Army wants to implement. Currently, the Salvation Army feeds a few hundred children a week during the school year through its Snack Pack program, but a mobile canteen would help them feed kids in the summer, too.

This year, United Way is also looking to partner with Aberdeen Parks and Recreation to create a “Born Learning” trail. This idea comes from their parent organization, United Way Worldwide, and is aimed at kids five years and under and their parents. “They’re basically street signs,” Aaron explained. “One will say, ‘Learning happens everywhere. Look at the trees around you and count how many birds are in the tree.’ Next there might be hopscotch on the cement.” The first trail system is planned to be at Aldridge Park on North Main.

The success stories that come from the Foundation’s assistance are endless, but Aaron emphasized that it’s really the community that makes it all possible. “United Way is a reflection of the community. We don’t produce anything here, the community just steps up – from manufacturing plants, to banking industries, to colleges – they all embrace to the United Way model,” he said. “I believe most people want to do good, especially around this area. We stretch every dollar as far as we can go and try to help as many causes as possible.” To learn more about the United Way or the United Way Foundation, contact their office at 605-225-0212 or visit their website at www.uwnesd.org. // – Becca Simon