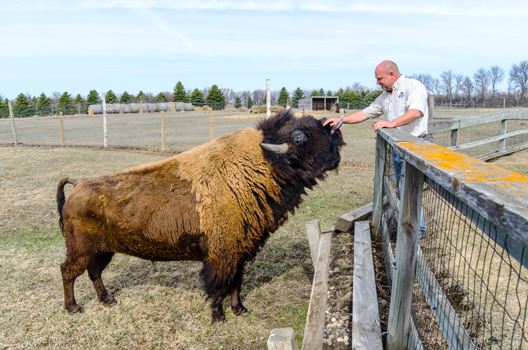 Spring has sprung in South Dakota, and you can see it everywhere – from the buds sprouting on the trees to the whitetail deer fawns following their mothers. Flocks of snow geese dot the skies and cover the fields in white – much like the snow we so recently left behind. Unlike the geese, however, who have the luxury of heading south, most of South Dakota’s wildlife weathers the frost and ice of the winter and the blazing heat of the summer year round. These creatures have proven themselves to be some of nature’s toughest survivors, and luckily, Aberdeen residents have to travel no further than the Wylie Park Zoo to catch a glimpse of them.

The earliest records of the zoo date back to 1915, only five years after Wylie Park was established and decades before Storybook Land even opened. Back then, it was called the Wylie Zoo Bird and Animal Sanctuary and was located in what is now the Birdhouse parking lot. The zoo was a lot different than it is now, providing homes to animals such as elk, monkeys, badgers, American eagles, horned owls, coyotes, foxes, and even predators such as bears and wolves. Back when it first opened, the zoo with its various attractions, including duck ponds, a wolf den, a birdhouse, and a granary, were popular attractions within the park’s boundaries. That holds true even a century later, even though the composition of the zoo has changed quite drastically. Now, Park Manager Mark Grote wants to convert the zoo to be an accurate reflection of the various types of wildlife that can be found roaming the plains of South Dakota. “We have so many tourists that come to Wylie Park and stay at our campground from all over the United States, so I want good representative animals of what you can see out in the wild,” he said.

The Wylie Park Zoo is already well on its way to achieving that goal. Currently, visitors to the park can see white-tailed deer, llamas, buffalo, elk, yaks, sika deer, and prairie dogs, in addition to the park’s two duck ponds. This year, Mark is working with Bear Country USA out of Rapid City to add prairie pronghorn antelope to that lineup, as well as bighorn sheep and mule deer sometime in the near future.

Because native animals are already well adapted to South Dakota’s harsh weather conditions, they are also easier to care for than non-native species. Under care from Aberdeen Parks and Recreation employees, the animals stay in the zoo year-round. In the wintertime, the animals need more hay and spend most of their time inside their shelters to keep warm. They are fed a special diet of corn and oats and have checkups every three months courtesy of Northern Plains Animal Health, in which they are given deworming shots and thoroughly inspected for any other medical needs. In addition to their usual daily meal, they also frequently receive “treats” courtesy of Ken’s Superfair Foods. “We worked out a deal with their old produce that they can’t sell anymore,” Mark explained. “We pick them up once a week and give them to the animals as treats.” They also use this process as part of training for the animals. During feeding time, the animals come up to the feed bunk, and that’s when they do their visual inspection to make sure they’re healthy. “They are very well taken care of. They have a great life out here.”

Mark’s favorite animal in the zoo is the bull buffalo. “He’s an amazing animal, and you don’t realize how big he is until he’s right in front of you,” he said. “He’s such a powerful, powerful animal, and he was made for this environment. The colder it gets, the happier the buffalo are. They run around and play in the cold, with frost on their faces and coming out of their noses.”

All of the animals either come from nearby zoos or local ranchers. The prairie dogs came from the Bramble Park Zoo in Watertown, and two of the cow buffalo came from a rancher near Onaka, South Dakota. In addition to the Wylie Park Zoo, Storybook Land also has two petting zoos filled with farm animals such as cows, goats, sheep, and chickens. These animals are given to the park on loan from local farmers and ranchers in the summertime, and are returned once the park closes after Labor Day.

Although the zoo may not be the biggest in terms of the quantity of animals it contains, it makes up for that in acreage. Each species has more than enough room to roam and exercise freely, something that’s crucial in keeping happy, healthy animals. “It’s also along the bike path and the hiking trail, so it’s a great environment,” Mark added. “What a better place to do your morning run than the zoo?”

As the days become longer and the weather continues to warm up, Mark highly encourages people to come visit the zoo. “Spring is an exciting time for us because we have new babies arriving. Who doesn’t like to see baby animals?” // – Becca Simon