History
A Wrinkle in Time
By Becca Simon | July/August 2017 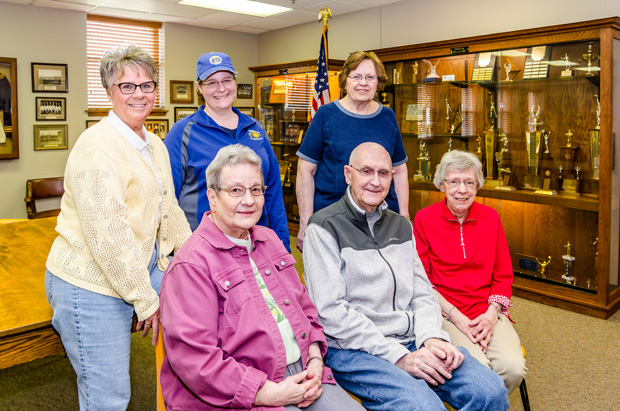 People might say that high school is about getting an education in order to attend a good college and succeed in life. But if you ask the folks that staff the Alumni Room at Old Central High School, they’ll be quick to tell you what it’s really all about: making memories that last a lifetime.

If you walk through the building on any given Friday, you’re bound to hear the sound of laughter reverberating throughout the hallway as volunteers reminisce over coffee and yearbooks from decades gone by. This is a typical day at work for the Alumni Room staff, in which work and play effortlessly intertwine. They sort memorabilia, refurbish trophies, mat and frame photos, and plan for reunions, all while coming together to pay homage to the good ol’ days.

It all started in 2006, right after the move to the new Central High School. Boxes upon boxes of trophies – some nearly a century old – remained untouched in the basement with no proper home to return to. In an attempt to clear them out, an open house was held in which visitors were allowed to take any items they desired. But this did little to make a dent in the sheer amount of stuff they had, and there seemed no other choice but to simply toss it all.

Lynn Hanson, leading volunteer of the Aberdeen Public Schools Foundation, couldn’t accept that. “We couldn’t throw all that away,” she said. “I’m not much of a saver, but there’s so much history there.”

David Eckert, supervisor at the ARCC, agreed, and the ARCC painted the room, put new carpeting in it, and told the Foundation to do whatever they want. “We had free reign with whatever we wanted to do in here,” Lynn explained. “We kept talking, sorting, and cleaning up trophies, and classes started to say ‘Hey, we want our stuff on display.’”

Since then, the community really stepped forward to make the Alumni Room what it is today. Generous Alumni who wanted to contribute to the cause donated everything in the room – from trophies, to uniforms, and even the cabinets that house them.

All this history collected into one place makes the Alumni Room the perfect location for class reunions. The volunteers set out the trophies, pictures, and memorabilia they have from when that class was in high school so alumni can relive the glory days of their youths. It also serves as the reception room before each annual Hall of Fame Induction ceremony.

“When you talk to alumni, they are so grateful to be able to come back and reminisce,” Lynn elaborated. “A lot of people get in here that weren’t even aware it was here. We get things in the mail and people are always dropping things off. I think the longer you’re out of school, the more meaning it has to you.”

These cherished memories are the reasons that those who have since gone on to carve their own paths in life are so compelled to the room, going out of their way to donate items and keep coming back. For people like David Shaw, retired industrial arts teacher, former track star, and 1961 graduate at Aberdeen Central, the room represents some of the proudest moments of his life. David was a successful 800m runner and long jumper, and went to state for four events his senior year. “Aberdeen Central was a fantastic nurturing environment for me. I had good support, great teachers, and lots of memories. It was phenomenal.”

As a history major, David has always been exceptionally interested in the past, so once he found out about the Alumni Room, he was nothing short of ecstatic. He provided a display case for track and field and has donated heavily to the room, providing trophies, newspaper clippings, and more.

The Alumni Room also captured the attention of voice actor, performer, and actor Wally Wingert, who attended Central in the late 70’s. Although his family moved before he had the opportunity to graduate from CHS, he still attends all of the reunions. Before he even graduated, Wally was working full-time at KELO and KSFY doing radio voice-overs. In 1987, he moved to Los Angeles to act. It wasn’t long until he discovered he preferred voice acting to traditional acting, and has since provided the voices for a multitude of cartoons, including Invader Zim, Family Guy, Hey Arnold, Garfield, and more. In 2009, he even served as the voice of the Jay Leno show.

Most notable of Wally’s donations is his Elvis Presley suit that his mom hand-stitched for him for the Eaglean Follies, Central’s student talent show. After Elvis passed away in 1977, Wally and his friends decided they wanted to do a tribute in memoriam. The rumor spread throughout the school that it was going to be something to see, and the show completely sold out. Years later, people still talk about it.

Wally loves looking at memories from the old days and seeing the people who managed to accomplish some really great things. He recalled four of his teachers, which he has dubbed the Fantastic Four, who played a huge hand in inspiring him to be who he is today. “I could mention 10, but the main four were my drama teacher, Tom Kelly, who was an enormous influence in helping me perform my craft, my English teacher Dennis Adams, Sandy Weins-Kersten, my typing teacher, and my radio/TV teacher, Jerry Ochs. That’s the best thing about Central, the teachers.”

Although Wally has long since moved on from Aberdeen, he still holds it close to his heart, making it a point to attend class reunions and Hall of Fame ceremonies. He stays in touch with many of his friends, teachers, and former girlfriends from his high school glory days. “You go back after all these years and expect everyone to be heavy and not have much hair left,” he laughed. “We’re all still a pretty good looking bunch.”

For Debra (Olson) Sowell, a 1967 graduate who currently works at Northeastern State University in Broken Arrow, Oklahoma, the Alumni Room is a place that allows her to reconnect with an old flame: the debate team. “The CHS Debate Program was one of a handful of influences that determined the general trajectory of my life,” she reflected. “That is a big responsibility to attach to a high school activity, but it is a true statement.”

Debra wistfully recalled her competitions from as early as ninth grade, which kindled her love for debate. In the course of her debate career, she learned how to lose gracefully, perfect her skills, and formed friendships with teammates and coaches that would forever change her. “It was the most magical time of my life,” she said.

Walking around the Alumni Room is like an emotional roller coaster back to Debra’s past. “I walk around it and it’s just wonderful. I remember the music program and Girls State; I remember the things that my friends did. The fact that it’s in Old Central is so meaningful to so many of us. I really would like to express appreciation for the people who work in that room. It’s a labor of love.”

“It is a connection to the past, and it helps me connect with the school system today. [The students today] are such wonderful kids,” Debra said. “They are just like we are. Someday their trophies are going to be right next to ours. I suppose there are plenty of practical uses for the room, but hopefully it will remind the alumni that the school system is something worth supporting. If you don’t live there anymore, you can support it with donations, and if you do, with your time.”

Although the volunteers at the Alumni Room love what they do, they are always seeking more volunteers who are passionate about preserving the past to ensure that their efforts continue long after they move on. // –Becca Simon

If you would like to donate to the Alumni Room or lend your efforts to their team, contact the Aberdeen Public Schools Foundation office at 605-725-7118.