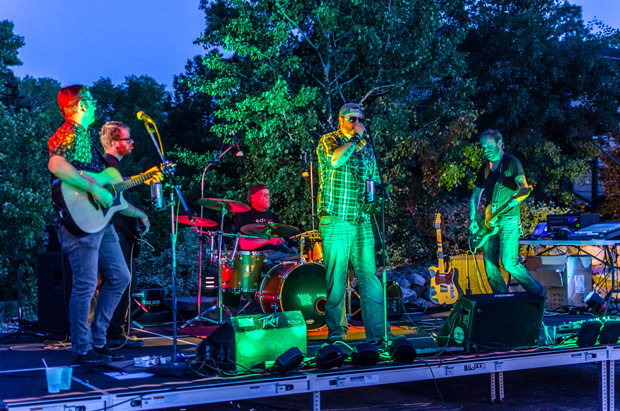 The Barstool Prophets Steal The Stage This Summer

The Barstool Prophets are a gang of booze swillin’, happy-go- lucky musicians who love music only a little more than they love goofing around with each other. The band has been opening shows and playing smaller venues around Aberdeen for a couple years now, and while they do consider themselves a country band, they’re not your typical one. Members count everything from metal, punk, rock, hip-hop, and even Dean Martin among their musical influences. Waylon Jennings and Bruce Springsteen are common set list items, mixed in with newer Chris Stapleton and Cross Canadian Ragweed hits. The best way to describe the sound? An eclectic blend of country, rock, and soul. The best way to describe the band members? They’d say “jackholes.” On a sunny summer day, a few of them sat down with me over lunch to talk about who they are and what they do.

The Barstool Prophets have known each other for years through the Aberdeen music scene. Some members had played together for a long time, some only for a few cameos and most had been part of more than one band at once. “People who say Aberdeen is boring have no imagination. Go out and start three bands,” Joel joked, as he, lead singer Ryan Malsom and drummer Keven Pleinis settled in at our table.

It was late summer 2015 when the Barstool Prophets officially started with its current five-member crew, which also includes Joel’s younger brother Jeremy Burckhard, bassist, and Logan Schumacher, guitarist. In the beginning, they weren’t sure about their end goals or even what kind of music they wanted to portray. It all started as a group of friends playing because they could. “It was more of a drinking club,” Joel laughed, halfway through his Bloody Mary, a beer and two fingers of Irish whiskey on the way. This is pretty standard for the band members, who drink, laugh and rag on each other just as much as they sing and play.

Naturally, then, a Barstools Prophet show is a party. Members of the band take swigs of beer between songs, out of cup holders on each mic stand. They talk to the crowd like they’re talking to a friend; they call each other out if someone accidentally plays a song in a different key – which happens, by the way. At a Saturday night show in June, the band smirked through an entire song, until Logan announced to the crowd at the end of it: “And that’s how you play the song a half step up!” That off-the-cuff humor is a staple of the Barstool Prophets shows, which radiate good vibes. “I can easily say this is the most fun band I’ve been in. We just have a blast every time we get together. I don’t even know for sure if we’re actually a good band, or if we’re just the best clowns in town,” Joel laughed.

That’s not to say the Barstool Prophets aren’t serious about their music. It’s quite the opposite, actually. They practice once a week, for six hours at a time, so that they can keep their shows original. “We want to keep it fresh, so you’re not playing the same songs every time,” Ryan explained. “It’s easy for bands around here to get complacent; we’re always trying to add.” And by that, he means constantly learning new music and making it their own. They strive to make every show different than the last by changing set lists, tying different songs together and tweaking covers to make them uniquely their sound. The goal is always to get more, different people to hear and feel their music. “We take the idea of what a song is and then try to jazz it up, make it different,” Ryan went on. “We get people who hate country and they like what we do, because we rocked it up enough.”

Pleasing the crowd is part of the aim, but ultimately, the Barstool Prophets have a different measure of success. “As long as we’re making enough money to pay the bills, we’re just musicians who love music,” Joel said. “If you’re only looking at what’s commercially viable, you’re not honoring the music.” Kevin echoed that sentiment by relating playing music to therapy; Joel chimed in with, “It’s catharsis.” “When you play that first chord and you feel it reverberate inside you, how anybody could ever not do that – if you’ve done that before – is beyond me,” Joel said, leaning over the table, feeling his arms for goosebumps. “(Someone) could be having the worst night of their life and you put that through them – you just deliver that into their soul – and then it’s like for five minutes they’re sitting in the sunshine, even if it’s a dark bar.”

Though they got together because of the music, the band exists outside of just that. “If the band ended tomorrow, I’m pretty confident we’d all still hang out,” Ryan said. “I’d be really mad about it though. It’d be like six months before we’d talk,” Joel joked, only half-seriously. “This band is my six flags. If we broke up, I’d be pretty upset.”

Making sure you can hang out and goof around with members outside of a band is not always a given, so it’s a special thing that the Barstool Prophets consider themselves best friends. “Anyone can learn to play an instrument, but not everyone can learn to be a cool guy,” Joel said.

In this band, playing acoustics, drinking beer and talking until 5 AM after a show isn’t uncommon. “Our best times are working up new songs and trying new things and just jamming and goofing around in the basement,” Joel said. Those relationships matter immensely to the band, which is why they mentioned the recent loss of two close friends, Jake Wald and Jeremy Brown. “People like (them), who love you no matter what, for who you are, that’s what keeps you going,” Joel said.

The band has worked hard for this very booked summer. They’ve got a gig at Wheat Growers July 18, a show during the Pro-Am tour at Moccasin Creek July 21, and performances at the Traverse County Fair, the Brown County Fair and Blues, Brews and BBQ at Centennial Village, among others listed on their Facebook.

Though they’re feeling some success now, it hasn’t always been easy. Along the way, they’ve had bad shows and unreturned calls, and have even – picture this – run out of beer at practice. Writing more music, recording, and getting more quality online content are on their list of things to do, while a YouTube channel and website are already in the works. And though they hope to travel more in the future, the Barstool Prophets will always have roots in Aberdeen. “People think Aberdeen’s not a viable place to start something. You can, it’s just a little harder. ‘The best grapes grow in hard soil,’” Joel said. “You have to be a dreamer, a lifetime dreamer.”

That’s some deep insight from a group of guys who throw bottle caps at each other during shows, yelling, “Are ya having that?!” in Irish accents and argue over “what those tiny hairs in your ear are called,” in between discussions about music. It’s clear that the Barstool Prophets don’t take themselves too seriously, which is a refreshing variation from the norm. In fact, they still get nervous before each performance, but “once you hit that first note, you’re in your element,” Kevin said. It doesn’t hurt if there are rumple mints on hand, either.

The band welcomed me back for a follow-up interview this time next year. For the Barstool Prophets, exposure is only the means to an end. The music and the friendship always take center stage. At the very least, our meeting would be a good excuse for a cold beer. // –Erin Ballard