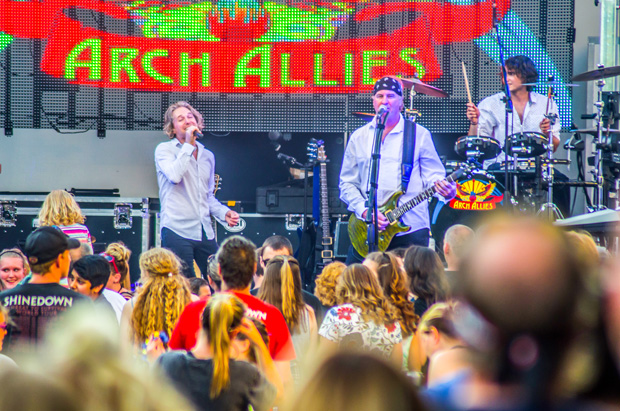 As the heat rolls in to Aberdeen, so does the music. The Downtown Summer Concert Series returns this year, with shows being held on alternating Thursdays and Sundays. Four bands take the downtown stage on the same amount of nights from June through August. Each show begins at 6 PM and all but one includes an opening act. Food and drink vendors will also line the streets, ensuring a great time for all concert-goers.

The first concert took place June 8 and saw the cover band Arch Allies perform some good ol‘ rock ‘n‘ roll. The group plays classic rock favorites from the Styx, Journey, REO Speedwagon, and numerous others. Two weeks later, Pop ROCKS returned, taking the stage and bringing the hits on June 24 for Aberdeen’s second week of the Downtown Summer Concert Series. The high energy performances are always diverse in music, and everything from throwback hip-hop to party rock to pop country appeared on their set list.

With a slightly different take on popular rock, Dirty Word will perform July 6. An ever-rotating group of musicians from all over the country, Dirty Word was founded in 1998 and considers Minneapolis their home base, but have traveled as far at Kuwait to entertain crowds. Their grassroots style lends a new, bluesy sound to the popular music set list they play. Expect Tom Petty, Creedence Clearwater Revival, and Led Zeppelin during this performance.

The concert series wraps up August 5 with a performance from Maiden Dixie. On their Wrecked Tour 2017, the group will treat locals to songs about the human condition in their “signature blend of country, pop, and rock,” according to their website. Maiden Dixie hails from Minneapolis and boasts six members who play with guitars, the fiddle, drums, and bongos. They’ll play songs off their new album, while also mixing in favorites from some of their musical influences, like Miranda Lambert and Lynyrd Skynyrd. // — Erin Ballard