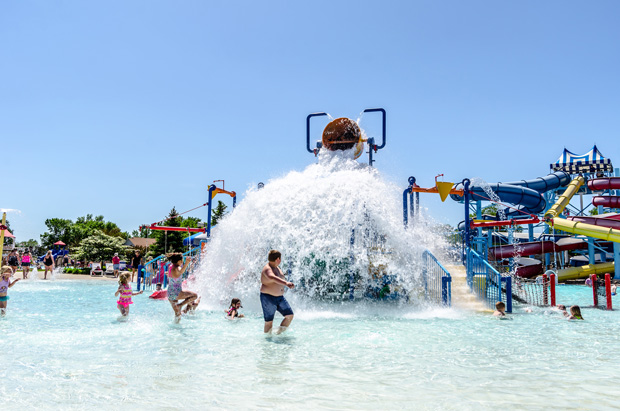 Area swimmers have been making a splash at the Aberdeen Aquatic Center for 11 summers in a row. There is something for everyone to enjoy at the park, including a 50 meter lap pool, waterslides, diving boards, the relaxing lazy river, and a shallow zero depth entry pool for the youngest water lovers. If you’d rather soak in the sun, the park also provides plenty of poolside lounge chairs and ample space on their grass-covered hill to spread out your beach towel. Feeling hungry after your swim? No problem. Just head to their concession stand which has cold drinks, snacks, and lunch on hand.

Travis Lemer, Parks and Rec Aquatics/Recreation Supervisor, says a lot of effort was put into designing the center to make it a fun and accessible place for all ages and interests. “It’s the community’s park and we wanted to do it right. A lot of focus groups and meetings were held to find out what type of place people wanted. We tried to incorporate as many different features as we could to accommodate a wide audience.”

Before the Aquatic Center opened its doors in 2007, Aberdeen was home to Southside pool, built in the 1950s, and Holgate pool, built in the late 1970s. By the early 2000s, both of these pools needed frequent repairs and updates. Once the decision to build a new swim park was underway, a company called Water Technologies was hired to design it, and many local businesses were brought in to complete the site work, buildings, and furnishings. The goal was to create not only a pool, but also a park where people could spend the entire day.

“There’s so much more to do and so much more space here. So it’s more than just an hour long trip to the pool, it can be a day long destination. It’s a great park for the community as well as an area attraction for visitors,” Lemer says. // –Jenny Roth

The Aberdeen Aquatic Center is open for the 2017 season until August 20. Open swim is usually Monday-Friday from 1:00PM-9:00PM and Saturday-Sunday from 12:00PM-8:00PM, weather permitting. Hours and times can vary so check their schedule before heading out at www.aberdeen.sd.us/364/Aberdeen-Aquatic-Center or call 605-626-7015.