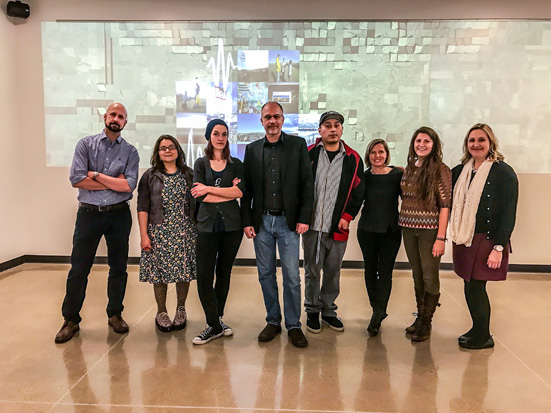 Unique Collaborative Mapping Project Explores our Connection to the Place We Call Home.

The people of the Dakotas have always shared an intimate relationship with the land. Whether you’re a rancher tending to livestock or a photographer who loves to capture sunsets and old crumbling buildings, there’s something about the vastness of the landscape that connects all of us to the sense that there’s more to the land than merely meets the eye. From the first pioneers of the land to the Native Americans who came before them, the people here have always harbored a strong sense of responsibility to the earth they call home. But what exactly does it mean to be connected and committed to a landscape? What makes this place significant, and how do people live in it? These are the types of questions multimedia artists Teri Rueb and Alan Price set out to answer in their creation of “Of Land and Dreams”, a collaborative mapping project currently on display in the JFAC Art Gallery.

Since Greg Blair approached Teri about the project two years ago as part of NSU’s Visiting Artists Program, Teri’s idea was to create a land-based work that also collaborated closely with the community. A professor of Media Study at the University of Buffalo, Teri’s works combine digital, architectural, and traditional media in order to engage people in projects that also bring them into the production and expression of the artwork. Together with Alan Price, her collaborator and Animation and Game design professor at Ohio State University, they initially sought to focus on environmental issues because of its importance to the community at the time. Due to its global attention over the past year because of Standing Rock, it was a topic that resonated with the Native American community and beyond, to people who have lived in the Dakotas for generations and even students and migrants from different countries. But as the conversation began to radiate out to more and more people, the topic slowly became much more complex. At its core, the goal of “Of Land and Dreams” is to create a conversation that allows for everyone’s voices to come forward in defining their own unique visions of South Dakota.

“Of Land and Dreams” is probably unlike any other art exhibition you’ve ever been to. Rather than walking into a gallery full of individual pieces mounted on walls, this interactive map is projected onto one wall using geotech. “It was important to us to create something that was expandable, that was inviting and interactive, but also could express something about the particular topography and nature of the land,” Teri explained. To do this, they chose to use Google satellite imagery. The map is a full-scale photo of the state structured as a grid, on which images and artwork appear on tiles that reveal themselves as you move through the gallery. Sensors in the ceiling make particular parts of the map larger as you walk closer to them, and the map also contains an underlying algorithmic movement that passes through autonomously that vaguely resembles a snake. This was inspired by the prophecy of the black snake that was at the center of the protests at Standing Rock, which states that a large black snake will run through the land and bring destruction to the people and to the earth.

Although the exhibition opened on April 21, Teri and Alan are adamant about the fact that the finished product is far from being revealed, and that the opening was in fact just the launch. All summer long, they are hoping that people will continue to access and contribute to the gallery here or remotely. That’s because the map exists far beyond the walls of the gallery: it is also a mobile web app. Anyone can contribute to it anytime and anywhere by simply accessing the app (on a regular computer, laptop, or mobile device) and submitting their own images, video clips, or audio recordings. Submissions appear instantaneously on screen, allowing contributors to share how they live their daily lives in the land we all call home. As Greg Blair emphasized, not every submission has to be a breathtaking landmark. “A place isn’t just its highlights,” he explained. “All the banal and meaningless and marginal spaces are important too. Those things are as much part of this place as Mount Rushmore.”

“Of Land and Dreams” is not the first collaborative mapping effort Teri and Alan have undertaken. In 2013, they created a mapping project in Montpellier, France that created an evolving image of the city through the contribution of sound recordings. However, they wanted this project to be shaped by the community process from the very beginning. When people think of the maps on phones and in cars, they often assume they are neutral representations of land. “But this project was meant to be accommodating of the individual perspectives and tensions that any map actually reveals or conceals,” Teri said. “This map was meant to allow people to lay those lines for themselves, to create some kind of base so we could all come together and speak across communities we don’t always come into contact with.”

While Standing Rock ended up being an important starting point for the type of conversation Teri and Alan wished to create, it was actually coincidental that their project emerged around the same time. The events at Standing Rock put the Dakotas in the national spotlight in a powerful way; something that still has an impact now, even after the media attention has moved elsewhere. “Many people felt reflected and maybe left out of that image. It was a moment that generated the base conversation and a kind of ownership that everyone is vying for around how we define our relationship to land and the contemporary movement. It’s a traumatizing conversation from any side, but certainly from a local perspective. I think that that shouldn’t be left in the shadows just because the cameras have moved on. It’s about trying to anchor something deeper,” Teri said.

Ultimately, what Teri and Alan hope to accomplish with this project is turning global issues into personal ones. “That would be my hope, that people would find themselves reflecting on and maybe even hearing a voice from within the land itself that allows them to feel a new connection, or give voice to the connections they weren’t able to prior.”

Teri’s work is often land based, and as a result she frequently travels from place to place, getting to know its landscape and its people. And although she has engaged with many different communities, she believes that it will be awhile before she moves on from Aberdeen. “The complexity of the condition in the Dakotas was something I found very intriguing,” she said. She explained that Aberdeen truly is a crossroads, serving as a nexus of different perspectives, communities, and ways of thinking about land and what it means to us. A new influx of immigrant populations crossing over with a continuing agricultural and ranching community, combined with the fracking industry in North Dakota and fiberglass manufacturing for windmills creates an interesting contrast between contemporary forces and history, including Native American and indigenous perspectives. “Aberdeen will still find ways into my practice for another couple years. I need to understand better what has happened here and what this place means through another work or reflection.” // –Becca Simon

 “Of Land and Dreams” will be on display in the JFAC gallery until August 25. To contribute via the Facebook page visit www.facebook.com/groups/OfLandandDreams.