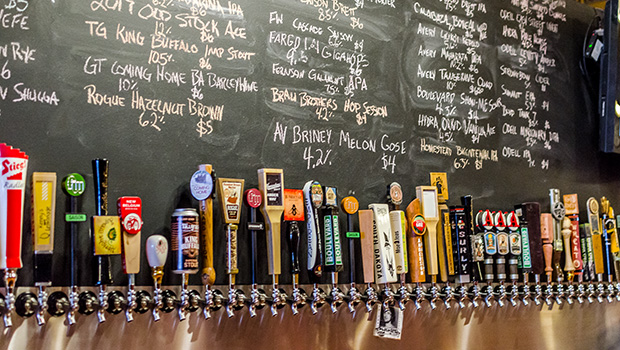 A decade ago, I wrote some beer reviews for A-List magazine, the mother of Aberdeen Magazine. I sampled some imports available in Aberdeen, but we never got to American beers. Even then, Aberdeen had many beers beyond the MillerBudweiser duoply, but in stores, not bars. That’s changed considerably, as the world has since discovered craft beers. Now, my palate is so spoiled I can’t drink the beers of my youth.

Craft beer is great, but what is it? For purposes here, it means you-know-it-when-you-see-it. It’s not your dad’s brewski. Crafts come in numerous styles: India pale ales, lagers, stouts, sours, meads (the magazine didn’t allow me enough words to cover them all). Besides varying the amounts of ingredients like hops and grains, craft beer stretches the boundaries of flavor, from pumpkin to peanut butter, and alcohol content, up to many, many—many—times a light beer. Seasonals, beers made for certain times of year, are staples —e.g., Octoberfest, winter lager, summer shandy. The names are another sign: e.g., Smells Like a Safety Meeting, Moose Drool, Woodchipper (from Fargo, don’t cha know). And the tastes! They can be spectacular—or not.

In late 2011, Lamar Marshall and Jon Hepola opened Slackers in downtown Aberdeen because, says Marshall, “Some bars were touching craft beer at the time, but not really doing it.” Their first hole-in-the-wall location (I never went, figuring I was too old) had lots of cooler space with 75-100 beers but only four taps because, “Craft beer basically wasn’t available in taps.” Tap beer made the Aberdeen beer ecosystem evolve.

Mavericks owner Kraig Schlacht faced the same issue. In 2010, he had moved his restaurant from 6th Avenue, where he’d opened in 1999, to the Dakota Event Center complex. Unsure what to do with the old location, he listened to the market. “Craft beer was really coming around in 2013,” he said. “So I thought, let’s do a craft beer place.” Timing is everything. Schlacht had been working with two beer distributors, who were just then getting into craft beer, then two more appeared. “If I had opened a year earlier,” he said, “we wouldn’t have had the beer to sell.” He launched Pounders in 2013 with 40 taps, plus another 60 or so bottled beers.

Meanwhile, back on Main Street, Slackers was moving and growing. First, in 2013, it relocated a few blocks south, where they had 20 taps. In 2015, they crossed the street to their current location and installed 50 taps, the largest set in South Dakota. Counting bottles, they offer about 120 beers.

As the guys who have the beer, distributors are key, and because both places use the same ones, there can be overlap in their lineups, or one may get something the other doesn’t. Said Alex Huber, Pounders’ general manager, “Sometimes it depends on whether they stop here first or at Slackers.” Since both bars have a mission to promote craft beer and the distributor offerings change regularly, their taps rotate frequently, with new beers moving in and out. As a result, tap lists change almost daily, which keeps people coming. Both bars post their current beer lists on the web and social media. Helpfully, these include the beers’ alcohol content (trust me, the time will come when you’ll care).

While many of the beers on tap are available in local stores, not all craft beers are bottled. Fortunately, both places sell growlers—typically, a half-gallon moonshine-looking bottle—which they will fill from the tap for you to take home if you find a beer you think you’ll like. But, please, think responsibly.

Breweries are another major factor. Both bars have relationships with craft houses, which offer promotional opportunities, including giveaways and “tap takeovers,” in which the brewer’s beers take over several of a bar’s taps. The right brands are big draws. The breweries tend to switch off between Slackers and Pounders in offering these specials, Marshall says, and “I’m down with that.”

For two bars with a common mission, they see each other as “friends, not foes,” Schlacht says, but they are pretty different. Pounders offers a full bar, while Slackers is all beer (plus some wine). Schlacht sees Pounders as a restaurant first; Slackers offers little food (some patrons bring their own). At least a dozen TVs, generally on sports channels, surround Pounders out to its patio (a great addition to Aberdeen’s dining scene). Slackers has four TVs, tuned apparently randomly to sports, movies, or the Cartoon Network, which they occasionally complement with live music.

Aberdeen’s craft beer evolution doesn’t stop there, however. Many establishments carry crafts. Lagers has 23 taps, the Circus 20, and Mavericks 16, all including some craft beers. This revolution has casualties too—Tapz and Flatlanders carried craft, but they’re no longer with us. The next evolutionary step for a craft community is opening a brewpub with its own local brew. Dakota Territory is on the horizon!

Craft beer is an acquired taste, but it’s worth checking out, and Aberdeen has great places to do that. Even if you think you never want anything but Hamm’s (currently $1 a can at Slackers), try something! There are so many choices, however (this is America), where do you start? The bartenders know styles and will help you find a good starter beer (I’ll always appreciate my gateway craft: Sam Adams Boston Lager). A great thing about craft beer places is most will let you sample a beer for free before you buy (I don’t know the limit on samples—I once got four at Pounders before ordering, and another time Slackers gave me two samples of the same beer—sometimes it takes a few tastes).

The key is don’t get hooked on beer reviews and ratings. Just as with books, music, and movies, don’t listen to what you should or should not like (I still laugh at Hot Shots: Part Deux). You like what you like. I love many craft beers and can’t stand others. The great thing is there are so many of them, you don’t have to be an expert. I’m not (don’t tell the publisher!), but I’ve learned what I might like—and that’s all it takes. // –Patrick Gallagher