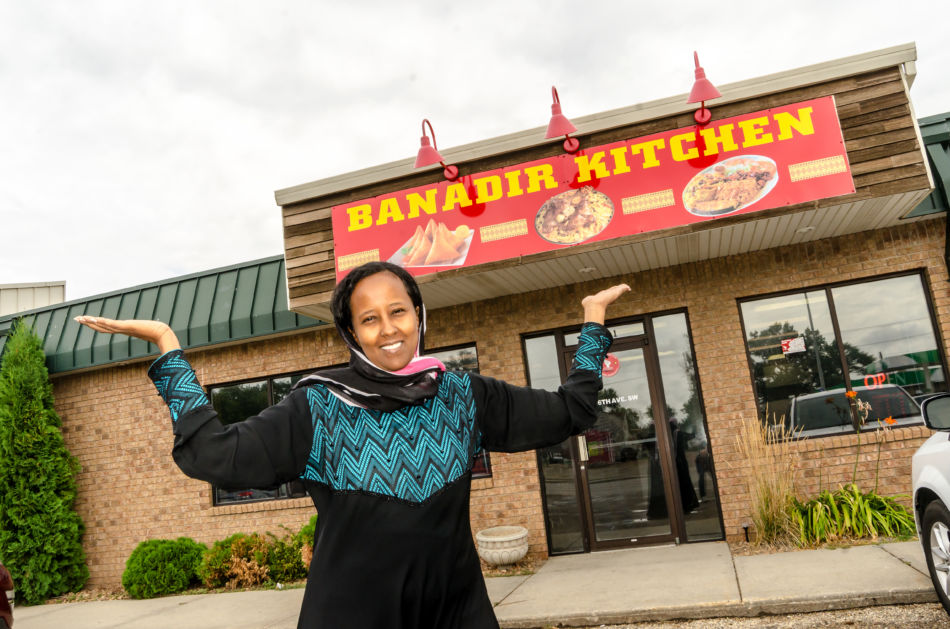 Acting on a tip from a friend Yasmin and Mohamudi Abdulle of Sioux Falls have opened a new ethnic food venture here in Aberdeen.  The new restaurant and adjacent market are located in the Tiffany Plaza at Sixth and First Street.  The restaurant faces south, while the market is on the backside facing north.  “We recognized Aberdeen’s ethnic population is growing due to hospitals and large companies employing large numbers of diverse peoples,” states Mohamudi, “so we wanted to try something a little bit different than was currently available in town.”  Their new restaurant, called Banadir Kitchen features a vast variety of ethnic, Middle East, cuisine including beef, chicken, goat, and camel meat.  Their meat is all halal (processing not unlike kosher), and sourced from the bet quality options available in the region.  “We pride ourselves on quality  and good health,” says Yasmin.  Many of their dishes are served with rice and house-made sauces. And a banana, as is customary in Somali meals.

The Bandar Halal market offers a Iquique glimpse into very different products ranging from foods to kitchen aids, to clothing and bath products. “We want to be a basic, one-stop shop,” says Mohamudi.  The first thing you notice when you walk in is the smell of the bulk spices and the pallet of rice and pasta.  Somali’s eat a lot of rice and spaghetti so the rice and pasta options are plenty and quite nice.  As Aberdeen’s population grows due to more and more jobs available, diverse cultures will continue to appear.  Businesses like Banadir Kitchen and Halal offer a great way to better understand a different culture in our midst.  Facebook reviews and comments are all very positive about their cuisine.  Stop in and meet the Abdulle’s local business partners, Yasmin’s brother Isse, and market manager, Yonis.  Both are very eager to introduce you to their unique flavors. // –Troy McQuillen