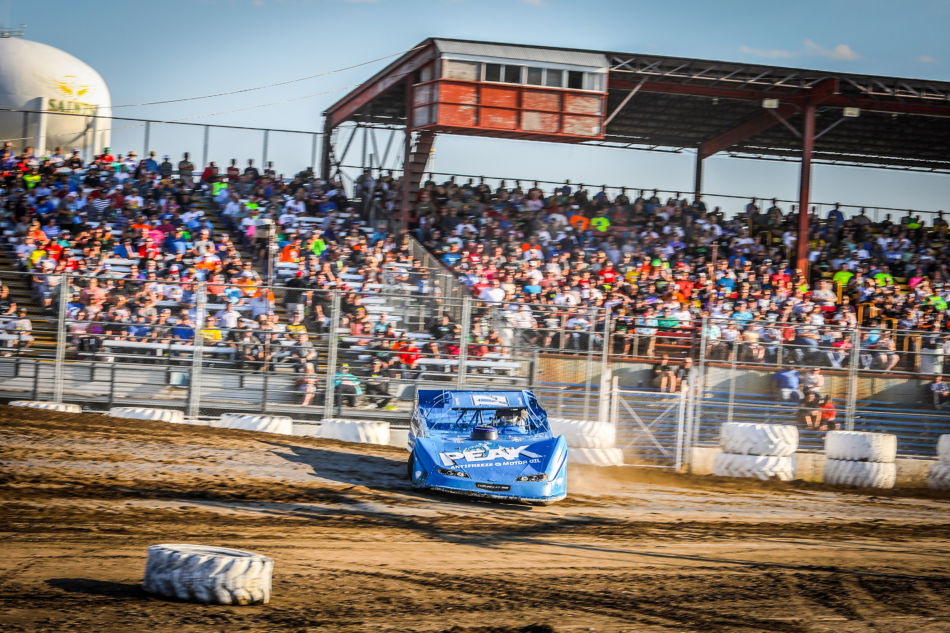 Friday night car races at the Brown County Speedway are a deep rooted tradition. Motorsport fans have been cheering for their favorite drivers at the racing track since its start in Aberdeen in the 1920s. Maybe it’s the roar of engines, the excitement that builds in the grandstands during a close contest, the way dirt flies as racers battle for position around a corner, or a combination of these and more that keeps people coming back each week. Todd Neuendorf accurately sums up the dedication of Aberdeen race enthusiasts, “Most people who head to the races are passionate fans who grew up going to the speedway every Friday night and now take their own families. Kids can go down in the pit afterwards and meet the drivers; it’s fun family entertainment that anyone can watch.”

Todd manages the speedway along with his wife Jaime, brothers Scott and Troy, and parents Ken and Pat. Prior to their start in running the speedway three years ago, the Neuendorf family made the drive from their home in Watertown to Aberdeen for weekly races as often as possible. “I’ve probably been going for at least 43 years,” Todd said. Because of their love for the sport and the race community, they jumped at the chance to operate the Brown County Speedway when the opportunity came. The county owns the track and leases it out in five year contracts. Even though their 2017 season is coming to a close, as car races run in the summer from Memorial Day through Labor Day weekend, there is still plenty of behind the scenes work that the family takes care of together year round. For example, Todd said, “We do all the track maintenance like taking it apart after races, blading it, putting it back together, and then watering it and driving around packing it down to get it ready for the next week’s races. Jaime runs the concessions and the 40 employees it takes to keep that going. We manage crews who work on race nights and help us clean up the grandstands. Then in the winter we are planning and securing sponsors. There’s a lot that goes into making it work.”

On a typical Friday night, hundreds of drivers from South Dakota, North Dakota, and Minnesota come to the speedway to compete in six different classes for cash prizes. Each class requires a different car model and increases in difficulty and speed. The late model class is the fastest performing in Aberdeen and the top level of racing for our area. According to Todd, many drivers were introduced to the sport at an early age. “A lot of kids that end up growing up and racing are kids that grew up coming to races or raced go karts ahead of time. It’s an expensive hobby, but once it gets in your blood, it’s hard to get out.” // –Jenny Roth

FOR MORE INFORMATION ON THE BROWN COUNTY SPEEDWAY VISIT WWW.BROWNCOUNTYSPEEDWAY1.COM.