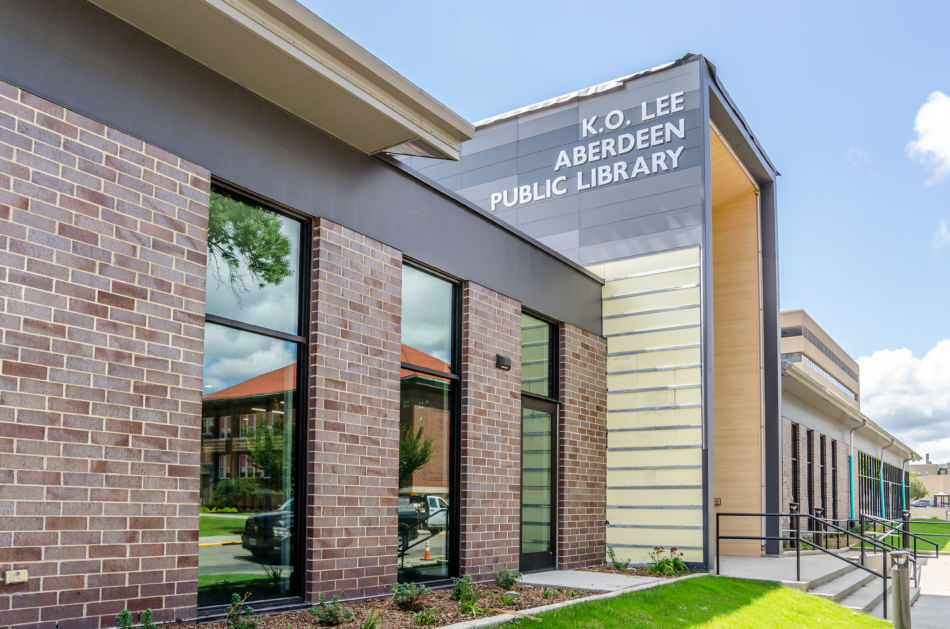 The Lee family continues their legacy of philanthropy for Aberdeen

With a move to a brand new building, Aberdeen’s library is retiring the name, Alexander Mitchell and replacing it with K.O. Lee in honor of Karl O. Lee who has graciously pledged $900,000 to the construction of the new library building.  For many, Alexander Mitchell is synonymous with our public library for very good reason.  His name has been on our libraries since 1901.

When Andrew Carnegie was enjoying massive success as a steel supplier to the booming railroads, he offered grants to communities across the country so they could build libraries in new pioneering towns along the railways. In all, he helped fund 1,689 libraries to the tune of $60 million. He was, after all, the richest man in the world at the time (1888).

These libraries came to be known as Carnegie Libraries. In all, South Dakota received 25 Carnegie Libraries, several of which still remain today. Aberdeen’s library was built in 1901 with a $15,000 grant on the corner of 6th Avenue and Lincoln Street at the current location of the First United Methodist Church’s expansion wing.  It opened the following year and served the community until it was condemned in 1950. It was in fact, not named after Carnegie, but rather for his friend, fellow Scottish immigrant, and president of the Chicago, Milwaukee, and St. Paul Railroad, the late Alexander Mitchell. Carnegie thought it fitting to name the Aberdeen library for Mitchell because he was from Aberdeenshire, Scotland, the namesake of our city. The legend goes that Aberdeen has the only Carnegie library not named after Andrew Carnegie. Despite inquiries with the Carnegie Foundation, this appears impossible to prove.

Fast forward 14 years to the grand opening of the library we just closed. This building took several years to get approved and built, and no new donor name was attached to it. The Alexander Mitchell name was simply appropriated to the new building that opened in 1964. Mitchell nor Carnegie had anything to do with the library on 6th and Kline.

Fast forward another 50 years and we find ourselves planning a very grand opening for a new public library. Plans for our new library began roughly in 2007 with conversations about a new building that would be better suited for a growing community and emerging technology. But what would the new library be called? Alexander Mitchell Public Library staff reported constant confusion with the library in Mitchell, SD (also named in honor of Alexander Mitchell). It was discussed early on to retire Alexander Mitchell and simply call it, Aberdeen Public Library because, that’s what it is, and that’s who is paying for it.

However, the city would only have available $5.9 million to put towards the new library and looked to the Library Foundation to help secure additional funds to make the library of a size and quality recommended by architects. So the Foundation pledged a total of $2.1 million in addition to the nearly $400,000 already spent on land and planning, and the project got underway. A public vote attempted to thwart the momentum and stop the project, but the folks of Aberdeen approved the vote with a 60/40 win in December 2015. In a sense, Aberdeen was ready for this project and things began to fall into place.

Fundraising began with great gusto and within a few months over 25% was pledged. Throughout 2016, fundraising success continued. Then in the beginning of 2017 Karl Lee, a long-time Aberdeen resident approached the Foundation and offered to fill the gap needed for the Foundation to attain its goal. As part of its strategy, the Foundation established naming opportunities for all the rooms within the library and put a $1 million option on the naming of the building. All agreed that Mr. Lee’s pledge of $900,000 was a substantial enough gift to name the library after him. The actual name on the building will be K.O. Lee per Karl’s wishes.

As many know, the Lee family is a familiar name here in Aberdeen. Karl O. Lee is the former President of K.O. Lee Company, a local Aberdeen manufacturing firm that had its beginnings in 1888. The company produced universal tool grinders and accessories, valve seat grinders, sanders, AC welders, drills, polishers, and many other items, generally designed by the company’s own engineering department, and distributed worldwide. The Aberdeen facility occupied over 125,000 square feet of manufacturing, warehouse and office space under one roof. At its peak, the company employed approximately 200 people. The company was sold in 2008.

The Lee family has been involved in the creation of a number of facilities to benefit the Aberdeen area over the last several decades, including Lee Park Municipal Golf Course, C.C. Lee Elementary School, the K.O. Lee Adult Day Health Center at Bethesda, numerous tennis courts throughout the city and has donated to many other private, charitable and religious enterprises.

Andrew Carnegie had a vision. He has said, “It was from my own early experience that I decided there was no use to which money could be applied so productive…as the founding of a public library.” He encouraged the concept of the free library all across the U.S. as the west was pioneered. Aberdeen truly benefited from Carnegie’s initial grant. Now, into a new millennium, Mr. Lee shares Carnegie’s vision specifically for Aberdeen. “This is one of the proudest days of my life,” said Mr. Lee. “This is an incredibly special moment and I hope this donation will in some small way continue to make Aberdeen the kind of community we all want to live in. My fondest wish is for this facility to become a place for discovery and inspiration for generations to come.”

The new K.O. Lee Aberdeen Public Library will open its doors to the public on September 18, 2017 with a ribbon cutting and grand opening the following week. // –Troy McQuillen