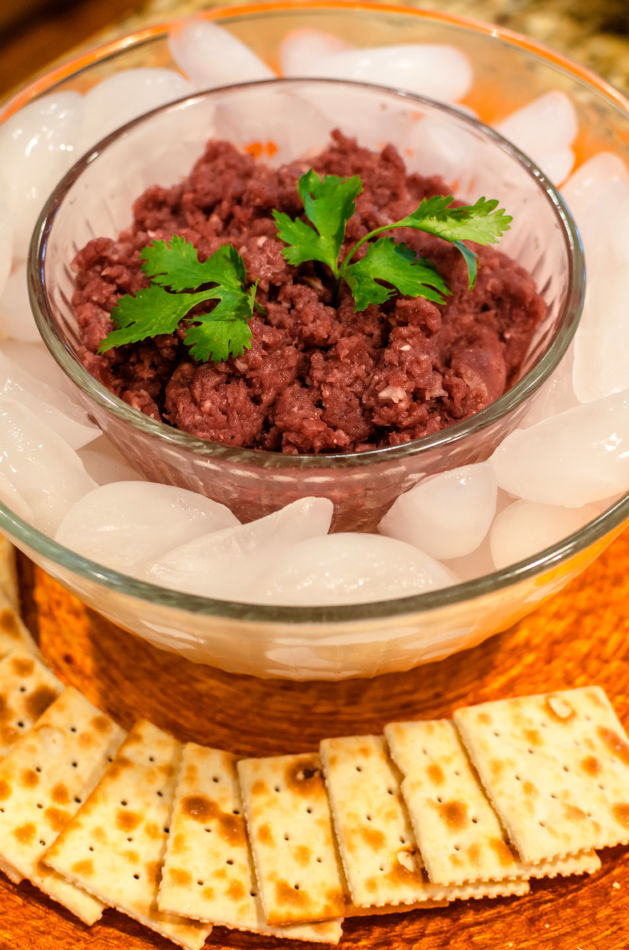 A bizarre local delicacy that is not for everyone

Many people around here can’t wait for a party just so they can serve and eat tiger meat. Why raw beef with raw egg is called tiger meat in these parts remains a mystery. The dish/dip/appetizer is very dangerous due to the raw ingredients and all federal and state food agencies strongly encourage people not to eat it. All risk aside, tiger meat is definitely a Midwest delicacy, in fact it’s not really found in many parts of the country. For whatever reason, we love it here.

According to Glen Aipperspach, a former Aberdonian who ran a meat market known for German-style meats, he believes tiger meat is nothing more than steak tartare, distilled down into simpler flavors befitting of the Midwest pallet. His parents owned a grocery store near Lincoln school in the 60s and 70s and on any given Saturday would make and distribute 20-30 pounds of tiger meat to Aberdeen bars.

Historically, steak tartare is raw ground beef or horse, mixed with minced onions, raw egg, capers, pickles, Worcestershire, Dijon mustard and seasonings. Historians argue it was named after the Tartar conquerors who introduced raw meat to the Russians in Germany, while others contend it means “with tartar” as in raw meat with tartar sauce. In any case, it came to the U.S. via Germans, Russians, or the French. Ultimately steak tartare was fried up in Hamburg, Germany, creating the hamburger.

Everything about tiger meat doesn’t make sense. The health risk is severe, although we don’t hear a lot about people getting sick. According to Glen and many online sources it’s best to consume it within two days. We have provided a recipe here because if all the health organizations are correct, you shouldn’t even risk transporting tiger meat to your home from a store without a cooler in your shopping cart. Several places around town sell it in their meat departments (without the eggs) with ample fans supporting their favorite. But so many questions remain. How fresh is it? How fresh is the beef; the eggs? To help reduce the risk, ask the folks behind the counter or make it yourself and eliminate the mystery. // –Troy McQuillen

Do NOT buy ground beef or hamburger! Fat develops e-coli and goes rancid quickly, and will create a pastier texture.  Use lean cuts of meat like sirloin or round, with all the fat trimmed away.  Venison and buffalo  would make for even leaner alternatives.  Keep it cold, and don’t get it out until you’re ready to grind.

Assuming your favorite grocery store stocks the freshest eggs possible, go for that, or find someone with a chicken coop and stand by the ready for a really fresh egg.

-Salt and pepper to taste

OPTIONAL Some folks add green pepper and a host of other spices and hot sauces.  But it seem those would obscure the actual taste of the raw beef, which seems to be the only point of consuming something like this, so why bother?

Due to the potential health risks associated with eating raw eggs and meat, prepare and consume at your own risk.

Cook’s Note: I am not a fan of tiger meat.  I added a pound of regular ground beef to my tiger meat prepared for this recipe, made patties and fried them up.  The resulting burgers are incredibly moist and delicious.