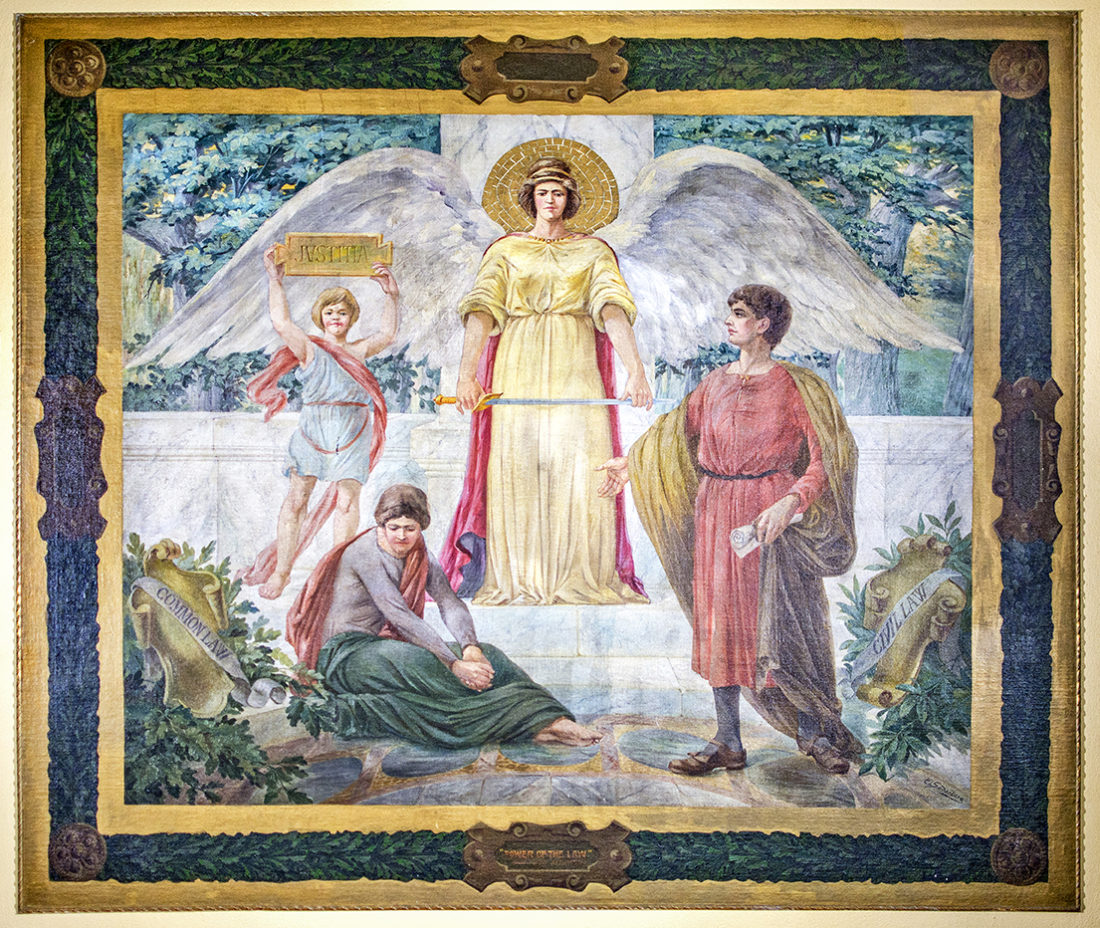 Can You Help Rediscover the Missing Paintings?

In 1904 the citizens of Aberdeen and Brown County celebrated the dedication of their new courthouse. The day was Tuesday, March 15, and the Brown County Courthouse was now officially open for business. After successfully bullying the county seat away from Columbia in 1890, Brown County commissioners set out to design and build a stately structure that would be situated near the original plattings of Aberdeen. It was built for a cost of $121,097 (including the jail), and paid for in part with bonds in the amount of $65,000.

Today, we still have the courthouse to remind us of our county center, the law, and property tax. Of course it has changed a lot with the annexes built both to the east and west that sandwich the historic building between modern structures. While the annexes may have taken away from the majestic setting of the building that was surrounded by grass, an iron fence, and trees, we still have the granite columns, stained glass, dome, and lady justice on top.

One thing we don’t have is the grand sandstone steps that every band, service club, and military regiment used as a backdrop for group photos in earlier days. Due in part to ADA compliance, the stairs were removed to provide an “on grade” entry. The odd thing about this is, instead of ascending to a glorious rotunda from the steps to the first floor, you merely enter into the basement or ground floor, which is divided up into small hallways and offices. You can take the stairs to the first floor, but you start to wonder: Where is the rotunda? In fact, Where are lots of things that used to be here?

The 1904 dedication booklet gives a thorough account of the building’s details, including the types of marble, granite, terrazzo, paint, moldings, and of course, artwork. After all, a government building wouldn’t be complete without allegorical murals to help convey the concepts of justice and the American way. Unfortunately, most of this art is lost. When major remodeling took place in 1968 and 1974, an elevator was added smack dab in the center of the rotunda, with offices built around the shaft. In the remodeling of the courtroom and rotunda, we lost all the signs of the zodiac that were painted in the dome, two ceiling murals, and two wall friezes at the base of the rotunda tower. What does remain is a large mural in the third-floor courtroom (left).

The dedication booklet says the original interior design was handled by a firm from LaCrosse, Wisconsin by the name of Odin J. Oyen Decorations. Mr. Oyen had recently hired an immigrant from Sweden by the name of Alex Edward Soderberg as his main artist. Unfortunately the booklet names him as R. E. Soderman, which is incorrect. Mr. Soderberg would travel the Midwest painting murals for churches, theaters, and government buildings. He traveled with his wife, who provided the likenesses for most of the females in his paintings. Sometimes the paintings were done in the studio in Wisconsin and then simply applied like wallpaper. Judy Dosch, Courthouse Building and Grounds Supervisor, says she believes the two ceiling murals were carefully removed and stored. She thinks, however, that afterwards they may have been damaged and discarded.

The scene in the courtroom that we still have today was repeated in other courthouses across the country. This was a favorite scene for Soderberg, as it features Susanna from the book of Daniel in the Old Testament. Susanna was accused by two men who spied on and lusted after her. When she refused sex with them, they told her they would say she was with a man in an attempt to shame her and have her put to death. This painting is of the trial she faced, and won. The large angel overseeing the trial is Justice. This painting is done on canvas and applied to the wall within a raised plaster boarder. Soderberg’s signature is clearly visible in the lower right, and a small ad for his firm is directly below the title in the nameplate.

Two paintings, done directly on a wall below the rotunda dome, are completely covered up by a new ceiling, but can still be seen through an opening in a wall in the attic space of the courthouse. They’re not easy to get to, and one must maneuver over an exposed plaster ceiling underfoot, almost jumping to an I-beam worthy of supporting a viewer. Of course it’s completely dark in the newly created void, so the painting isn’t too faded. Unfortunately blown-in insulation conceals about half of it (top right). There is another painting on the opposite side of this space, but it is very faint and no records exist indicating what it looks like. The only thing visible on it is a row of faded tree trunks.

As it stands now, the courtroom mural is the only art piece visible today. Yes, the additional art would contribute to a complete work; architecture complimented by art and vice versa. However, the building’s stained glass, marble, granite, and metal railings are still a wonder to behold. But unless you’ve committed a crime, or are a part of the legal system, you can’t simply stroll in and look at the remaining Soderberg mural. That’s why we’re showing it here. It measures about ten by eight feet and the colors appear to be a little muted. The dedication booklet also describes a room on the ground level featuring murals with agricultural themes. We have no idea what happened to those, other than assuming a loss to the proverbial paintbrush, or layer of drywall.

Our appeal to you is this: if you have any photos of anyone taken at the courthouse before 1968, can you please check to see if there is any artwork or murals in the background? There were hundreds of marriages performed there, so it stands to reason that there would be wedding day photos including the missing art. // –Troy McQuillen

We would like to acknowledge and thank Judy Dosch for providing access, helping with our photography, and providing information about the courthouse.