People
Playing From The Heart
By Jenny Roth | January/February 2018 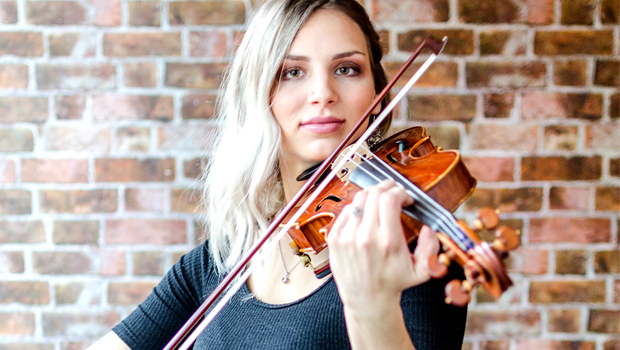 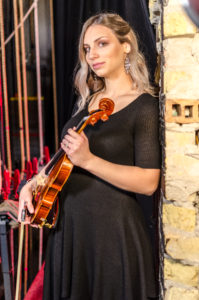 When Emily Engelhart plays the violin she doesn’t want you to just hear the music, she wants to make you stop and feel the emotions of the day going on around you. She has performed in all kinds of special events in the Aberdeen area, with some of her favorites being the Living Christmas Tree, NSU’s production of Les Miserables, the Christian Worship Hour broadcasting program, and the K.O. Lee Aberdeen Public Library opening. “I love the Aberdeen community because it’s so supportive of the arts. I’ve had so many opportunities living here.” She believes live music has the ability to bring joy and capture important moments, which is why she works diligently to bring a unique experience to every single performance.

Emily grew up in the Central Valley of California. When she was eight years old she had a friend who played the violin, and it inspired her to give the instrument a try herself. She started taking music lessons from private teachers who all encouraged her to grow in her musical abilities, especially her teacher in later years, Dr. Susan Doering. From grade school all the way through high school, she kept busy playing in numerous music competitions, school orchestras, and California state symphonies. In 2011, she formed the HER String Trio, which included herself as lead on violin as well as two other musicians on the viola and cello. Together they played over 50 gigs in a span of one year until 2012, when Emily married a corn and soybean farmer from South Dakota and moved to the Westport area.

After her move, she began playing with others in performances around Aberdeen. By this time she had years of experience leading and performing in groups, but it wasn’t until 2015 that she played solo publically for the first time, when she was hired by Roma’s Restaurant on Main Street to play for their customers. Later in 2016, she decided to launch her own business as a solo entertainer for weddings and special events, a move she says she almost didn’t make. “One thing I’ve always struggled with is stage fright, and so my inspiration for starting my business was literally my fear-fear of not being good enough or making mistakes. I didn’t want that holding me back, so I decided the best thing I could do for myself was to make myself uncomfortable.”

She took the leap and began advertising as a solo violinist, and has gotten only positive feedback and plenty of business as a result. “I can now say I am completely confident in my musical abilities and no longer have that fear hanging over my head. I enjoy performing and entertaining more than I ever really could have.” In 2017, she played for eight wedding ceremonies. She says it is about so much more than just getting a couple’s song list and showing up on their day to perform. “I think of the event almost as if it were a scene in a movie. In the movies there is always that music in the background, making you feel some kind of emotion. That’s what I strive to do for each couple, to capture the intense emotional moments of their day, and make it something to be remembered.” When planning wedding performances, she will sit down personally with couples to make sure she gets the music totally customized to them so that it will clearly reflect their personalities. “When I’m at a wedding and guests come up to me and say, ‘Wow, that music totally reminded me of the couple,’ that’s when I know I’m doing my job well.” Since the music in weddings is so closely intertwined with the rest of the ceremony, she also provides wedding coordination assistance to couples who want more help in organizing the details of their day.

Emily plays so effortlessly now that you would never assume she ever had stage fright or any difficulties along the way. She says that she did have a natural ability at playing the violin, but even so it is a difficult instrument to master, and while she was learning at a young age she had times where she wanted to give up. Her parents and teachers always cheered her on, and that is one reason why another part of her business includes giving violin lessons to help encourage others to reach their goals as well. She says that anyone can start learning at any age, and that she has students ranging from 70 years old, to 30 years old, to teenagers. Her advice to aspiring musicians is to keep practicing through the frustrations because you can find so much joy at the end of it all. “I know I did and anyone can, too, if they put their heart and mind to it.” // –Jenny Roth

To learn more about Emily Engelhartís music business, find her on Instagram at @emengelmusicofficial, or at Facebook.com/emengelmusic.