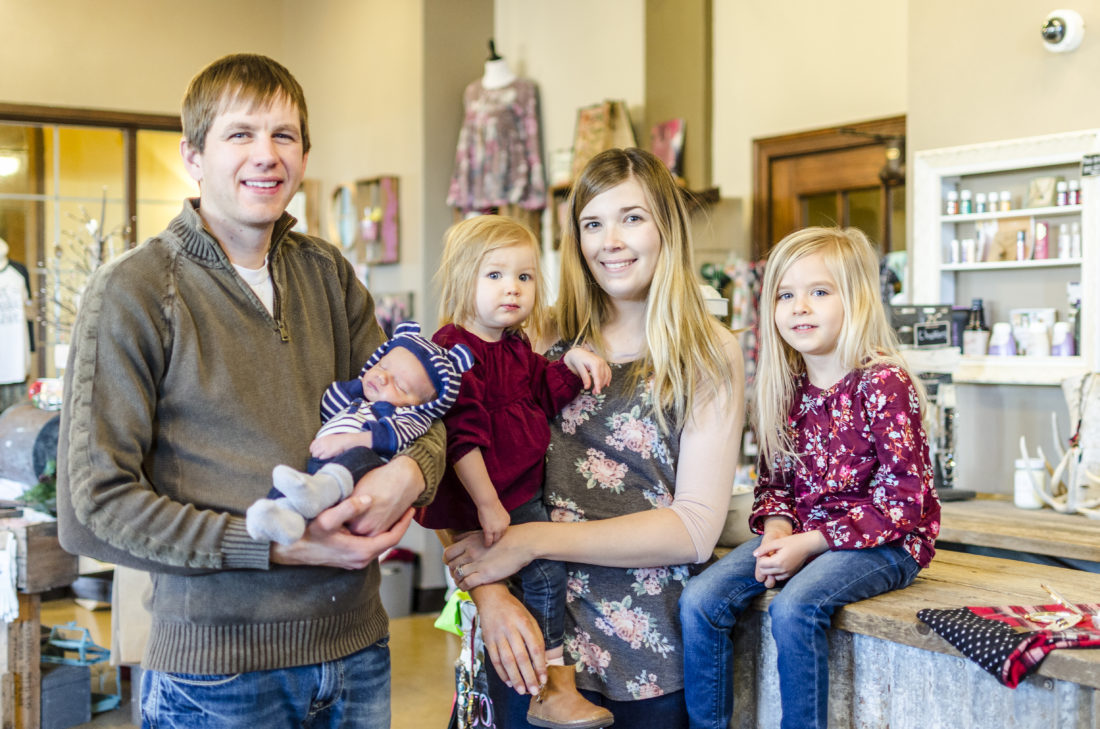 This January the Farmer’s Wife Boutique is celebrating its two-year anniversary of being open in the Ward Hotel on Main Street. What started as a hobby for owner Samantha Miller has grown over the past four years into a small business that intends to keep helping all women feel beautiful and self-confident in their own skin.

In 2014, Samantha was living on her husband’s family farm, located about an hour outside of Aberdeen, and had just left her job as an occupational therapist to become a stay-at-home mother to her young daughter. At this time, she started looking for a creative outlet that would allow her to enjoy doing something for herself, as well as interact with others, when she noticed a lot of boutiques popping up on Facebook. Since she had always loved fashion and the extra confidence it can bring out in people, she says, “I got the crazy idea that I could do that too.” With her husband on board, she took their savings, invested into some pieces of clothing, and started a Facebook page to see how selling the items would go. Within a week she had a web site (www.thefarmerswifeboutique.com), and soon after she began traveling to vendor fairs in the Aberdeen, Sioux Falls, Watertown, and Fargo areas with her clothing. “We did 33 vendor shows in three months, some weekends we did three in a row with a show on Friday, Saturday, and Sunday.”

After about six months of selling online and at vendor fairs, she got the opportunity to rent a location in Groton. She says up until that point she was storing all of her merchandise in the basement of her house and in a 16-foot trailer. “I initially decided to rent the space just as storage, so we could have our house back, and so my husband could have his trailer back!” Eventually she transformed this space into a storefront that was open just two or three days every week, but after a year her business came to another turning point. “Most of my customers were coming from Aberdeen, and so I was in a place where I knew I needed to either let the boutique go, or take the plunge and move it to Aberdeen.”

She admits that part of the transition from being open in Groton to having a store on Main Street Aberdeen was a bit scary. “I had never had employees before (the store now has three), and a few days after our grand opening my second daughter was born. So my first employee started working the day she was born! It was also a learning curve of not knowing what to expect from sales, balancing bigger overhead expenses, and planning for the different seasons.”

Samantha has been open about sharing her ups and downs of business ownership with the Aberdeen community, because as she says, “I think of all of our customers as much more than just a sale, they’re a part of our circle of family. I want to know them, and to also be honest and include them in what is going on in my life, too.” After the closing of another venture this past year, her children’s apparel store Lil’ Bean Boutique, she says she decided to focus more on what she wants for her business, versus trying to do what other businesses aren’t doing. This shift made her realize her goal is to run her store much like she wants her home and family farm to operate-on the values of family, faith, and community. “We really want to be the small mom and pop type shop instead of expanding and trying to become huge and carry expensive clothing lines. Like in farming, community and relationships are so important, and we want to keep those values present in our boutique at all times.”

Since she has grown her business while also growing her family (her third child was just born a couple months ago) she has not only been a resource for other entrepreneurs, but also an advocate for area women and moms. She hosted support groups for mothers at Lil’ Bean and also encourages them by saying, “Don’t be afraid to ask for help and take time for yourself. And if you have something you want to do just try it, you don’t know until you try.”

Walking into the Farmer’s Wife Boutique, it’s easy to see the values Samantha talks about present throughout her store. She carries women’s apparel in a variety of sizes-from small to 3x, as well as maternity tops, dresses, and bottoms, and children’s clothing, mainly in sizes newborn to six months. Everything is posted on her web site, so customers can shop from home and have their purchases sent directly to them, or put aside for them to pick up at the store. Samantha’s children often come to work with her, and the boutique’s shelving and display units were hand-built by her husband. She also carries gift items, many of which are handmade here in South Dakota. “We work with other small businesses as much as we can. I’d rather support someone who makes their own t-shirt line, or hand pours their own candles, before investing in a huge company that is already in stores all over the country.” // –Jenny Roth