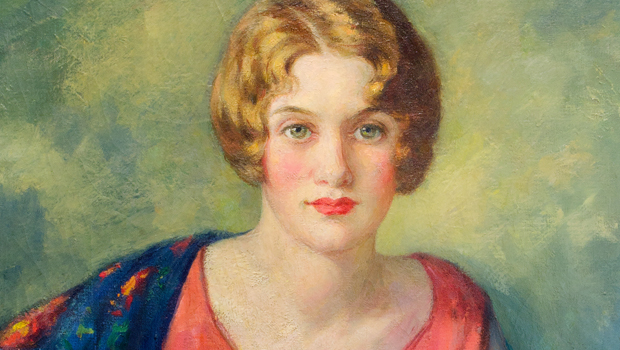 Frank C. Ashford left for a career in art, but always came home to Aberdeen

Paris, France was a hot bed of artistic exploration during the Belle Epoque era that stretched from 1871 to 1914. This era received its name, translated to the golden age or beautiful era, after and in contrast to the tragedies of World War I. Looking back, the Belle Epoque was a time of romanticism, love, peace and creative exploration. If you saw the movie Moulin Rouge back in 1997, this is the era, and location, they were portraying. This is when impressionism took off with the likes of Claude Monet, Auguste Renoir, Edgar Degas, Henri Matisse, Mary Cassatt, Henri de Toulouse-Lautrec, and inspired a Brown County resident named Frank Clifford Ashford.

Frank Ashford? Maybe you’ve heard of him. Maybe not. If you used to go the Alexander Mitchell Library in the ’60s and ’70s you probably have seen some of the paintings. If you heard the story about Fred Hatterscheidt’s exotic hunting trips to Africa while touring the Dacotah Prairie Museum, you would have seen his portrait painted by Ashford hanging near the elephant mount.

If you do an online search for Ashford, despite his prolific career, you won’t find much. Which is odd. By all accounts, he has fallen off the radar and his work is either coveted by owners, or totally forgotten. A Google search will reveal the very cool story of the Museum sending one of their Ashford paintings away for restoration, and discovering a perfectly intact second painting on the same canvas. Or you might find South Dakota Magazine’s recent article about the 10 must-see paintings in South Dakota. They feature another Museum piece by Ashford, named Woman with Shawl, above which is displayed in the foyer of the Museum. New owners found this painting in Ashford’s family farm home near Stratford in 1994. It too was sent away for restoration.

As I began my research online, I feared I had little to go on, thinking this would be a short story with a few big pictures of Ashford’s work. Fortunately, Sue Gates at the Dacotah Prairie Museum provided a paper written by the late Frances “Peg” Lamont, who did extensive research on Ashford in 1991. Needless to say, his story is long.

However, since space is limited, I’ll have to be brief. Frank was born in Iowa in 1878 but moved to a farm near Stratford, SD, in 1893. A few years later, when he was 17, he left to go to art school in Chicago. He ended up in New York studying with an accomplished impressionist painter named William Merritt Chase. In 1907, he was lured to Paris. He painted constantly for seven years and traveled around Europe.

With the onslaught of World War I, he decided to return home. One day before the Titanic departed, Frank got on a boat from France in 1914. The Titanic sank while he was en route, and he provided comments to the local media about the frenzy in New York when he arrived. His boat had traveled through the same iceberg field, but in the daylight.

For the next several decades, Frank traveled around the country settling in Minneapolis, Sioux Falls, Portland, his family farm near Stratford, and Aberdeen. He established a studio for a period of time where ever a commission presented itself.

The local media would often publish a story when Frank returned to the area. Frank would always eat at the Virginia Café and would often invite pretty women who came into the café to pose for him. He was well respected and it was considered an honor to be invited to pose for him. Newspaper clippings at the Library report particular women who were to be painted by Ashford.

Frank’s biggest single claim to fame (aside from a lifelong career as a successful artist) is that he and Peter Norbeck arranged for him to paint a portrait of President Calvin Coolidge in 1927 while the White House was in residence at the Game Lodge in Custer State Park. He painted Coolidge’s wife Grace a couple times and also did one of Norbeck. All three still hang on the main floor of the lodge.

This presidential notoriety led to many, many other official commissions. He painted three South Dakota Governors (Lee, Jensen, and Foss), and several judges (many from Wisconsin and Washington). In this post-Coolidge period, Ashford was commanding $500 to $1,000 or more for a portrait.

After 1956, Frank ultimately settled into a lifestyle in downtown Aberdeen. He lived in the Boyd apartments (above Malchow’s). When some friends noticed he hadn’t shown up for his routine coffee or luncheon, they knew something was wrong. Frank was found dead in his apartment from a heart attack. He was 82 at the time. The year was 1960.

Just as detailed information is difficult to find online, so is any information about the values of his paintings. After his death, local attorney Douglas Bantz mounted an auction of all his paintings from his studio. Many paintings were sold, but not at tremendous values. Another attorney, Hugh Agor bought several paintings and eventually would donate all 11 of them to the Library. Many had been on display in the library, which is why you may recognize some of the ones shown here. The Dacotah Prairie Museum has a fine collection as well.

Frank did get married but divorced not long after. He did paint at least one portrait of his wife, Marjorie. They had no children. Frank’s two brothers went on to have descendents and at least one is on the lookout for Frank’s Oregon landscapes. Maybe others collect his works. So far, we’ve not found many. Each painting leads us down a new rabbit hole.

I’ve not found a person who knew Frank. Peg Lamont spoke to several in the Stratford area who knew him and mentioned them in her 1991 paper. We don’t know what motivated him, what prompted him to move around the world, why he lived in an apartment downtown, or, where his paintings are in the world.

As always, if you have any stories about Frank, or if you are familiar with or own any of his paintings, please give us a call.

I would like to thank Shirley Armendt of the K.O. Lee Aberdeen Public Library, Cristy Biegler from Bantz, Gosch & Cremer Law Firm, Sue Gates of the Dacotah Prairie Museum, and Scott and Meleah Ashford of Oregon for assisting me and allowing access to their Ashford collections. I am also appreciative of individuals who let me into their homes to photograph their Ashford paintings. // –Troy McQuillen