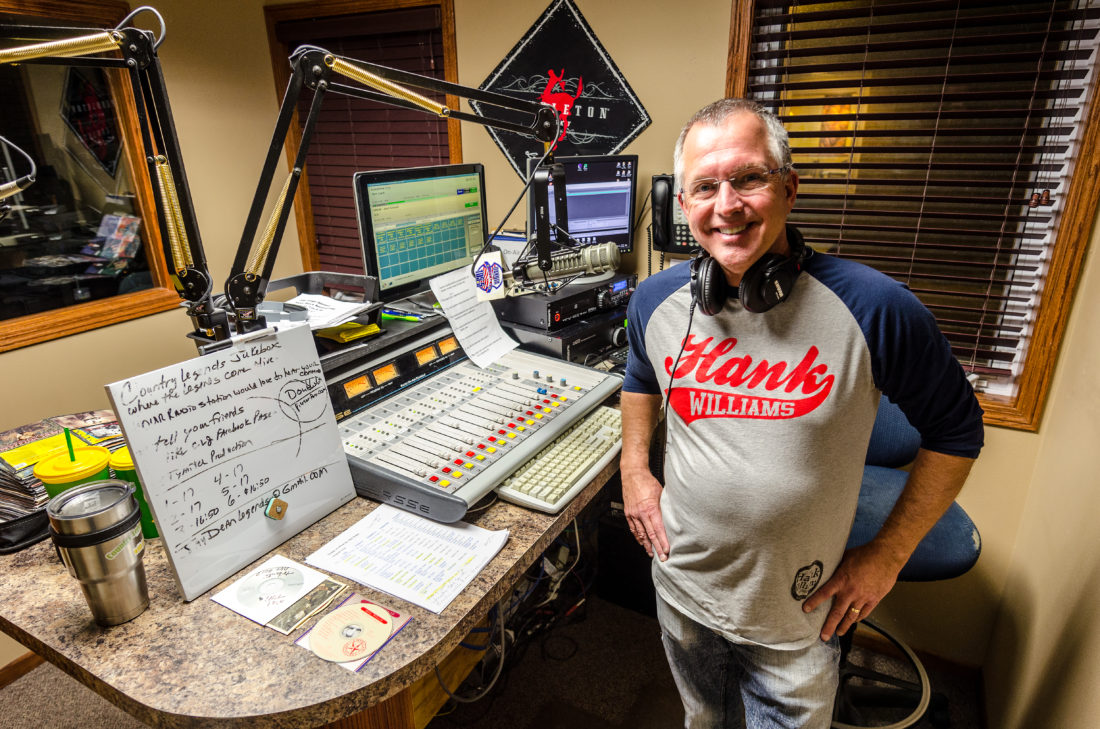 Classic country music artists tell stories with an unmatched art form. Local radio host Jay Dean Haaland has made it part of his lifeís work to connect his favorite storytellers and their songs to his fellow fans.

Jay Dean has been in the radio business for over 25 years. His current country music show, Country Legends Jukebox with Jay Dean, hit the airwaves just a few months ago and has taken off running ever since. The show, which he records in advance at Dakota Broadcasting, features ’40s through ’80s era country music. It is already played on seven different radio stations across the Upper Midwest (Aberdeen listeners can tune in Sundays from 3:00PM to 5:00PM on Dakota 105.5), and Jay Dean is working to continue expanding the program. By this spring his goal is to be on 20 radio stations, and within five years he hopes that Country Legends will be on at least one station in each of the 50 states, as well as played internationally. “I want this to be a worldwide success,” he says.

Hosting a two-hour country oldies radio program that can be broadcasted to an audience around the nation has always been Jay Dean’s dream, but he says he still didn’t expect his show to get as big as it has so quickly. Part of the reason why it has received such a great response is because even though classic country music has a large fan base that extends across many generations, there still aren’t a lot of radio shows that focus on it. As Jay Dean explains, “That ’40s through ’80s era of country music is really missing from radio right now. People are having to go to satellite radio to listen to their music.”

Other characteristics that make Country Legends a hit with listeners are the morsels of history and fun facts about the singers that Jay Dean throws in with his playlists. Classic country music has been a part of his life since he was four years old, and his enthusiasm for it shines through in his show. “When the other kids were outside playing, I was inside on my phonograph. Country music was a peaceful place for me to be as a kid, and I would always rather be listening to music on the record player than anywhere else.” Even his mom adds that she is not surprised to hear her son’s voice on the radio, because when he was as young as five she remembers watching him introduce the artists he was listening to before playing their songs on his phonograph.

At age seven Jay Dean took his own money to a local store in Britton and purchased his first record ever, “Kiss an Angel Good Morning” by Charlie Pride. Since then, his music collection has grown to include thousands of 45 records, hundreds of CDs, and his own home jukebox. He began working in radio in 1982 in Aberdeen on KGIM, after which he went to radio school in Minnesota and continued working at various stations across the tri-state region. When he moved back to Aberdeen, he was one of the first voices to be on Pheasant 103 and Sunny 97.7.

Inspiration for Country Legends also comes from his time spent meeting some of his favorite artists while at their concerts. Out of the hundreds of concerts he has attended, he says one of the best was a George Jones, Conway Twitty, and Merle Haggard combined performance in Bismarck. He adds, “While taking part in country music radio seminars in Nashville, I would get to go backstage at the Grand Ole Opry and meet the singers, get to know them, and talk to them. A lot of the stories and facts I put into Country Legends come from those conversations I had with the stars backstage.” Meeting the artists he had listened to since childhood made him appreciate their music even more. “The people singing this music are so real. They’re down-to-earth, approachable people who will take the time to talk to you and take a picture with you.”

When Jay Dean sits down to record his radio show, he says he mostly lays out his CDs and plays whatever comes to him in the moment. Along with getting to talk about and listen to country music, the best part of the job for him has been pleasing the fans. “I got into radio for the simple fact that it allows me to entertain people. Country Legends getting the type of well-response that it has just blows my mind. This is what I’ve always dreamed of doing.” // –Jenny Roth