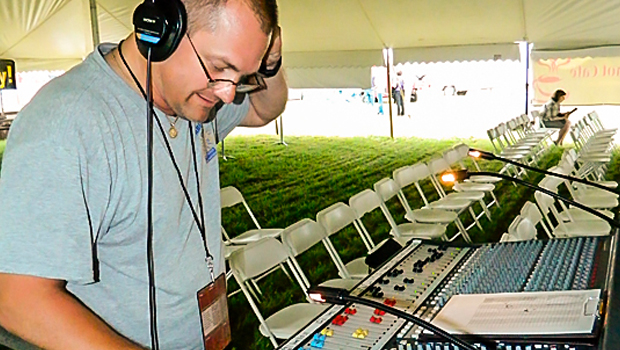 Scott Sauer reflects on all the highlights and changes he has experienced in Pauer Sound’s first 20 years of business.

Some people in Aberdeen have jobs where you only know they’re doing it if they haven’t done it well. When it’s done right, they’re invisible—or silent. Maybe the coolest job like that, especially because it’s usually done in cool situations, is the one Scott Sauer has in his business. Pauer Sound sets up sound for concerts, weddings, street dances, and all kinds of events where if you don’t think about the sound system, he’s done his job well.

Scott celebrated his 20th year in business in 2017. He admits that things have changed since 1997. Back then, he’d been selling instruments for Engel’s Music, when downtown jeweler Kevin Pleinis urged him to start his own business selling guitars. Eventually convinced, and with Pleinis as a partner (hence P(leinis)(S)auer Sound), Scott opened up across the street from Engel’s in a building his partner owned and that was next door to Pleinis’ store. His shop was the center of the space currently occupied by the Main Street Flea Market-which still says Pauer Sound on the awning, and if you go in the main entrance, you’ll still find a wall full of guitars for sale. Within a few years, Scott bought out Pleinis, but says he “couldn’t have done it without Kevin’s help and coaxing.”

Scott opened his business intending to “sell guitars,” but retail started off slowly. Producing sound for events was meant to be a secondary thing. “It wasn’t as big a business then,” he explains, because “so many bands and DJs had their own equipment.” So he did sound only occasionally, using his personal equipment. Then a part-time employee decided to start a DJ business at about the same time Scott attended a national music trade show and found subwoofers that he wanted. They teamed up, and the rest is history. The DJ had sound for his shows and sometimes ran the sound board for Scott’s band. Most importantly, Scott had equipment to produce events. He remembers his first professional gig being for Aberdeen’s old Barbershop Quartet Festival. (The professional term for what Scott does is “producing” sound, but “gigs” makes the writer sound cooler [Editor’s note: it doesn’t].)

Over time, Scott developed his skills as the technology exploded and bands’ sound wants became more sophisticated than their knowledge—his business solved their problem. Now, Pauer Sound does 50-60 gigs a year, frequently doing multiple shows on a weekend. He has equipment to do four or five smaller shows on one day.

It’s not surprising that Scott is involved in sound and music. He’s been strumming since pre-K. When he was about four years old, his dad took him to see Johnny Cash and Rock and Roll Hall of Fame guitarist Carl Perkins perform in Bismarck. Scott came home begging for a guitar and got one for Christmas. In his home near Java, there wasn’t “much else to do on the farm, so I practiced a lot.” It paid off. By age six, he was in a band with three girls, which they called “Four Cat Day” (one-upping Three Dog Night).

In high school, Scott performed in various groups, but it was his Christian band that got him in trouble. After choosing rehearsal over football practice once, his coach called him out for it in front of the team, so he began to keep his music more to himself. But a few years later at a high school dance, he met Dan Reed and Dan Pred who were performing in the band from Aberdeen. One thing led to another, and Scott began making the trip from Java to Aberdeen for practices and gigs. Then he went to Northern, where he played in the band almost every weekend. “We probably made more money in the early ’80s than bands do today,” he says. Eventually Reed and Pred left for the West Coast, where they formed a new band—and, after a car accident with the president of Polygram Records who got interested and attended their show, they got signed to a deal.

Scott’s music background—and maybe the latent teacher inside him—led to a unique opportunity. Before Kevin Pleinis closed his shop next door and Scott took over the whole space, Kevin turned over the back end. He cleared out room in the back of the old Pleinis shop, set up a performance space, and invited some young musicians and their bands to play there in what he calls “punk shows” and invite their friends. As many as 75 people might show up. (Today, if you go back in that area of the flea market, you can buy amplifiers—the ghost of Sauer past.) Scott won’t take credit for it, but several of those youngsters grew up to work in music, including Josh Reick, who builds musical instruments in Sioux Falls and made Scott an upright bass made from a piece of wood recovered from Lake Erie.

Education remained a theme in the business, and a decade or so later Scott opened Rock School. A group of fledgling young musicians took individual music lessons from instructors for a month to learn an instrument, and then practiced together as a band for a month. Graduation was a public concert at a small venue like Red Rooster. He says he wanted to “develop their musical chops and also get them confident performing on stage,” and admits to tearing up more than once while watching some of those young people blossom on stage.

Scott also continued to play music on the side. He met Rory Hoffman, an NSU student from Lemmon who was a great musician and “one of those guys who makes everybody else around him better.” They got to fly to gigs out of state and did a TV show for the Country Music Christian Awards (an experience that taught him a lot about live performances). Eventually, Rory moved to Nashville and has since toured with Ricky Skaggs.

Scott has also combined his work, passion, and faith in various ways, including the Roncalli High School production of Godspell in 2008. In addition to setting up a sound system that had to transform a basketball gym into a theater, he also led the four-piece live band that backed up the actors. “It was a great, if complicated, experience,” he says.

Throughout all this, as much as he wanted to sell guitars, the businessman in him began to realize that retail wasn’t his future. Competition in Aberdeen and on the Internet had radically changed the environment for his business and made him reevaluate. “I learned to appreciate my customers much more and realized that some of my customers in the install business had become good friends,” he says, adding, “I also learned to rely more on my employees—you can’t do everything—and I’ve had some great employees.” This reassessment drove him to leave his Main Street location in 2014 and open a smaller shop on First Avenue NE, where he concentrates just on sound production and system installations. He misses watching the young musicians get excited about the equipment he was selling, and says, “I was scared about leaving Main Street, but it was the best thing I’ve ever done.”

Scott has installed sound systems since early in his career in many places around the area. Churches have been the most interesting. The architecture always fascinates him, as well as the sometimes quirky acoustics. He’ll often find that one place in the church where you can whisper and be heard a hundred feet away. One of his first installations was in the Barnett Center not long after it opened. That was done on a shoestring budget, so he was pleased to get to upgrade the system a few years ago with the kind of budget it deserved.

As Scott concentrated on production, a new endeavor that had seeds in the earliest days of his business emerged. Back when he invited local bands to perform in the store, one of his financing supporters brought his young son, who like any little kid got in the way while Scott was mixing for the performers. In time, that little kid learned the business in college, and the “frickin’ genius surpassed me,” Scott says. That kid now leads a sound production business in Spearfish, which along with another West River business, joins forces with Pauer Sound to share equipment and expertise in gigs across the state.

Over the years, Scott has done many kinds of gigs in many venues around the Aberdeen region. A favorite is the Living Christmas Tree every year. One of the most memorable was the Aberdeen Pig Out on Main Street several years ago when a band from the Twin Cities came to perform. They were so good, Scott says, “I could turn the EQs upside down, and they’d still come out smelling like a rose. Great musicians are like that.”

No matter how they smelled—and whatever upside-down EQs would do—they also sounded great because the sound guy knew what he was doing—even if no one else knew he was doing it. That’s cool. // –Patrick Gallagher