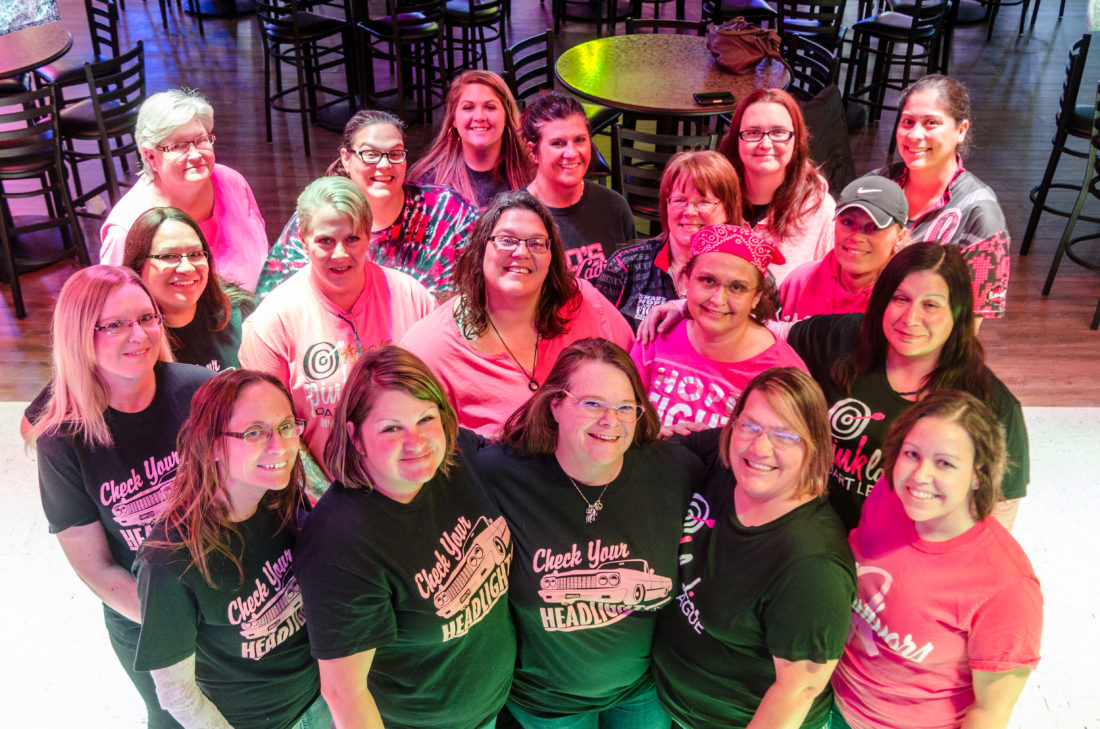 Ladies dart league aims at a good cause

One of the best things about living in small-town South Dakota is that communities here often pull together during difficult circumstances. We’re known for reaching out and helping each other in times of need. The Aberdeen Pink Ladies Dart League is a perfect example of how anyone can go above and beyond for their neighbors and change lives in the process. Their motto, “No One Fights Alone,” is a powerful one. To make it a reality, they put in serious volunteer hours working to do all that they can for area families who ask them for help when they find themselves struggling after a loved one becomes ill. And while they may prefer to wear pink, the group wants everyone to know that they do not just support women with breast cancer, but are here for any man, woman, or child suffering from any form of cancer or life-altering illness.

When someone is sick, all kinds of unexpected expenses can arise in addition to medical bills, like travel costs to visit doctors and lost wages from having to miss work. It can be a lot for one person to deal with, especially while they also fight for their health. This is where the Pink Ladies step in. Together with the family, they host benefits that raise funds to help ease the burden of these medical-related expenses. Pink Ladies member Brenda Christensen says, “Our benefits are different for each person, and we sit down with every family to learn exactly what kind of event they want to have.” So far the benefits they have done include dart tournaments, bean-bag tournaments, a chili contest cook-off, a rummage sale, bake sales, silent auctions, and more. And they don’t just show up on event day, but instead plan the entire thing, advertise, find donors for auction items, set up and work the event, and stay afterwards to clean up.

Even though their benefits are meant to raise money, a big part of what they do is raise spirits, too. League member Faye Goehring describes it well by saying, “We have quite a lot of fun, there’s a lot of laughing and crying at these benefits, and people leave feeling like they’ve added more people to their family.” Rather than giving to huge charities, they keep everything local and give all the money they raise directly to the area families. In addition to their fundraising events, you can also find them doing things like delivering gift baskets to patients going through chemotherapy, and cooking meals for those who aren’t feeling well after their treatments.

Pink Ladies  groups exist all over the state thanks to Randy Oliver, who founded the initial league in Yankton in 2012 for his mother who was diagnosed with breast cancer. The pink ladies have grown so much in popularity since then that now hundreds of women are involved, and this past year the governor even declared October 14 officially “Pink Ladies Day.” They have extended their reach further than South Dakota as well, with organizations popping up across Iowa, Nebraska, and Canada. Their rapid expansion is mostly due to word of mouth, as more and more people keep finding out about their successful fundraisers.

Randy also helped form the Aberdeen Pink Ladies  in 2013. To date, that league has about 50 active members. They meet most Tuesday nights throughout the year at different establishments around town to throw darts. Each member pays a small weekly fee, which also goes toward helping anyone that reaches out to them. Lisa Sudlow, league organizer, says, “A lot of the money we raise comes from our own girls putting in money every week to play darts.” She also explains that part of the reason they have been able to do so much for people and experience good turn-outs at their events is because in addition to the Pink Ladies , there are many other dart teams and players in the Aberdeen area. “Our dart community is great. When we announce we’re having an event, everyone comes to it, it doesn’t matter who it’s for.”

The pink ladies are always welcoming to new members, and they insist you don’t have to be a pro at darts to be a part of their league. Member Kari Brown says that when she joined she had zero experience playing darts, but is so glad she decided to give it a try anyway. “I am not good at darts at all, but I started because I had some health issues and couldn’t play softball or do some of my other activities, and so I joined and I love it because it’s just for fun, we laugh a lot, and it’s for a good cause.” Her friend and team member Dawn Hall adds, “You definitely don’t have to be good at darts to play, and you might even surprise yourself!” // –Jenny Roth

For more information on the Aberdeen Pink Ladies Dart League, go to www.facebook.com/AberdeenPinkLadiesDartLeague.