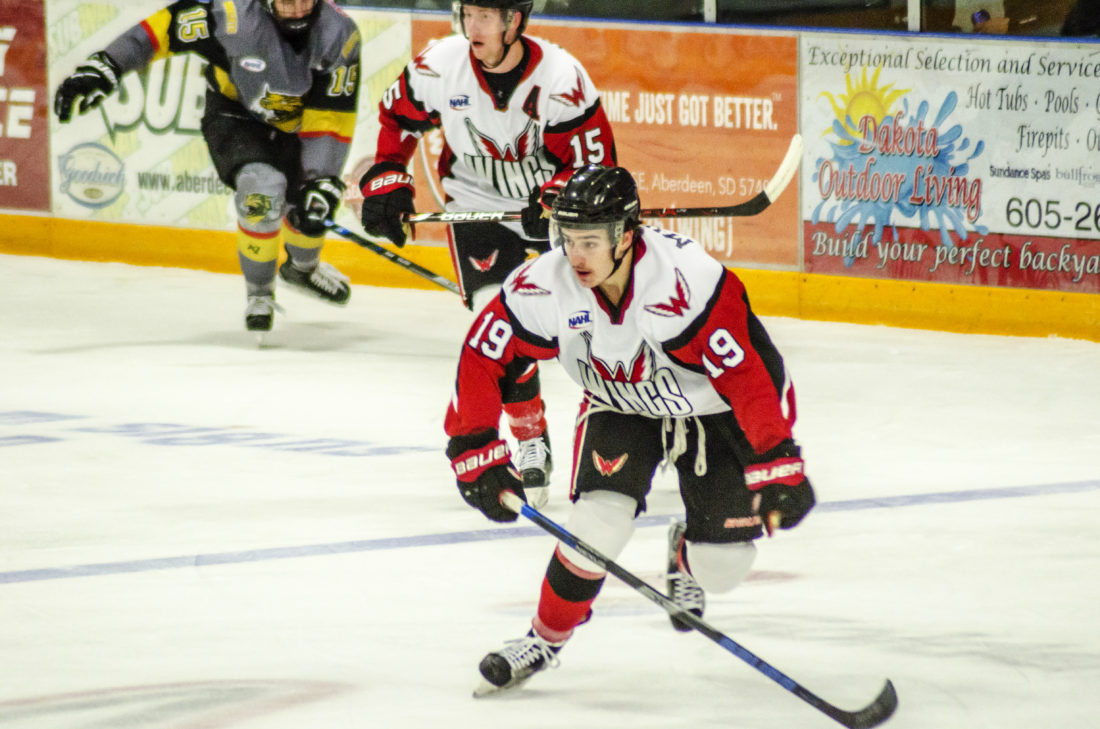 It’s a home game for the Aberdeen Wings and the bleachers are packed. Standing spectators line the rink, holding cold beers with gloved hands. Fans wearing jerseys signed by their favorite players cheer, stomp their feet in unison, and ring cowbells. And you know the game is underway when the announcer’s call of “Let’s play hockey” is followed by the sound of skates cutting across the ice.

The Wings have had incredible success in just seven years of being a hockey organization. Last season they were the NAHL Central Division Champions, with coach Scott Langer being named the division’s Coach of the Year. Scott says winning games and taking home championships is great, but that their first goal as a junior hockey league is to help their players grow and move on to higher opportunities. “We’re progressively becoming one of the top teams in the league as far as moving players on. We’re here to assist these young men on their path to play at the college level, whether it’s in Division I or Division II.”

To date, the Wings have seen three of their players become NHL draft picks and over 30 enter into Division 1 commitments. After last season they lost about a dozen team members, because as Scott explains, “They became so good that they were recruited into higher leagues.” Their players are all between the ages of 17 and 20 and come from all parts of the United States and the world. They stay with host families in Aberdeen, and some also attend high school at Aberdeen Central while playing for the Wings. During the pre-season they focus on training camps and team building activities and continue to practice regularly throughout the year.

The Wings’ fan base is exceptional, and the team is proud to be an active part of Aberdeen. Scott says, “We’re big on community service because it’s an important part of the growth process for our players, for them to become better people, and also a way we can give back to the community and everyone who comes out to the games.” Players can be found around town helping out organizations such as the Aberdeen Humane Society and the Salvation Army. One of their favorite volunteer opportunities is teaching hockey fundamentals and spending time with local youth in the YMCA’s floor hockey program.

Scott emphasizes that the Odde family has also made all the difference in the Wings being successful in Aberdeen. “They are so family orientated and give us all the resources that it takes to succeed, and we wouldn’t be where we are without them.” He adds, “There are a lot of teams in this league that don’t get even close to the support that we get here in Aberdeen. For me and my family, that’s quite special.” // –Jenny Roth

The Aberdeen Wings will host regular season games at the Odde Ice Arena through March. Check out www.aberdeenwings.com for all the details.