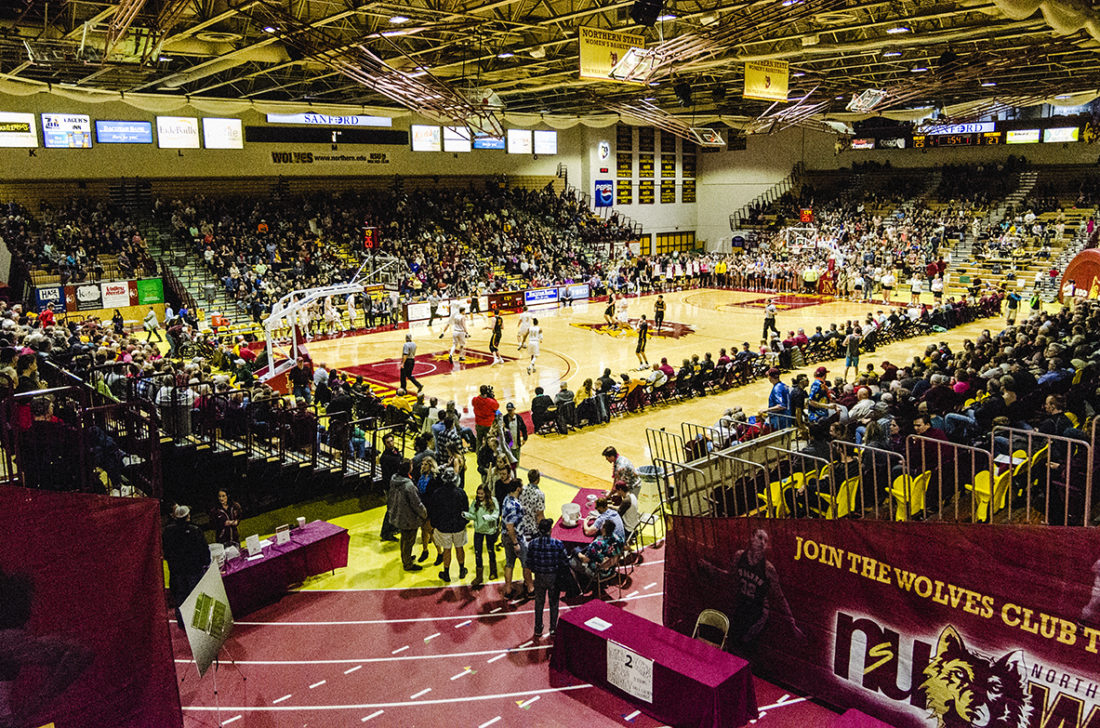 They are a Division II college nestled in the heart of a small community with a population of just over 25,000, but the NSU basketball team has a fan base that is second to none. In national fan attendance polls, the NSU men’s team has not ranked lower than eighth, with the exception of one season, since they joined Division II, and the women have not only been the leaders in Division II fan attendance for the past ten years, but are also in the top 40 for all NCAA teams. The tremendous crowd support and energy that runs through the Wachs Arena during an NSU home game is almost indescribable. Women’s Associate Head Coach and former NSU athlete, Paula Krueger, sums it up well by saying, “You can’t explain it, it’s something you have to experience.”

Paula has had the unique experience of witnessing NSU fan support as both a player and a coach. She played for the Wolves on their two-time NAIA Division II National Championship winning team from 1990 to 1994, helped coach the women from 1997 to 2003, and after serving as a head coach with other organizations for 12 years, is now in her third season since returning to Northern. She says the fan base at NSU is generational, and unlike any place else. “I see the same people at games now, sitting in the same spots that they did when they came to games when I was playing in the ‘90s, only they’ve added a few more people because they now have families that they’re bringing along with them.” One NSU fan in particular, Mae Wiley, has stood out to Paula. Mae attended all the NSU games when Paula was a player, and continues to come support her now that she’s a coach. “Mae has been sitting in the same seat for as long as I can remember, well over 25 years, and before every game as a coach I go over and give her a hug. With the exception of my family, I don’t know that there’s been someone who’s been there to see me play or coach more than Mae has.”

Eric Kline, who played for NSU from 1992 to 1995 and holds the men’s leading scorer record for the team with 2,660 points, agrees with Paula that the Aberdeen community played a key role in making his time spent playing basketball here one of the best experiences of his life. He also credits the coaches for genuinely caring about their athletes, and says his favorite memories are hands down the day in and day out interactions he had with his teammates. But before he was a part of the team, Eric says he was a young Wolves fan himself. “I grew up in Aberdeen and watched the Wolves when I was a little boy, and was even privileged enough to tag along on out of town men’s games with Coach Bob Olson. It was always fun for me to watch players like Gene Lorenz, and I thought that would be pretty neat to play college basketball and be like some of those guys I watched.” Eric loved the game of basketball, and after attending Augustana for his first year of college, he transferred to NSU and played his remaining three years for Coach Olson. He emphasizes that while they worked hard to win games, playing basketball was actually secondary to building relationships and the responsibility of being a student athlete. “We talked about that a lot as a group of athletes, that it was a privilege and something really special to be able to play college sports and be a role model to the youth who came and watched games. We didn’t take that for granted, and I still don’t today.”

Current NSU women’s point guard and sophomore, Brianna Kusler, adds that one thing that makes Wolves fans so special is that they don’t just support the team at home games, but also follow them on the road. “Our fans travel so well. It’s not uncommon for the crowd to be 75% Northern fans when we’re at an away game. For me, one of the factors that influenced my decision to come here was that atmosphere. We all obviously love basketball, but at the end of the day you want to be playing in front of a crowd, and we get to do that every single night, whether it’s here at home or out of town.” Brianna also grew up in Aberdeen. She is the seventh person in her family to play basketball at Northern, and both of her parents were also student athletes here. Her words echo those of players like Eric Kline and Paula Krueger who played for NSU years ago, in that she agrees attending NSU games is an area tradition, and that the coaches and community members look out for the players on the court and off. “When you go out to a store or somewhere in town, people will recognize you and say, ‘Hey, how are you? How’s practice going?’ They really care about you, and that’s unique.” Since she’s been able to follow NSU sports since childhood, she’s also noticed the fan support that started with the basketball team has started filtering into other sports, and that the attendance at football, soccer, and volleyball games has also grown. “It started as a basketball community, and is growing into an NSU community.”

Josh Moon is in his sixth year as NSU’s Director of Athletics, and says the university is really a hidden gem. The fan attendance at games is one of the best, and that definitely helps recruit student athletes from all over the state, region, and world. “When athletes come here people know their names, and there’s an interaction that you don’t get at a lot of other places.” To keep the momentum going, the university is always working to enhance both the student experience and the fan experience. “It starts with successful teams, so first we work to give our coaches and student athletes all the resources they need to build those teams and create solid programs. For fans, we’re always trying to make going to a game a really cool family event by including different promotional things, like the smoke and video that we added to the starting lineup announcements this year.” Nathan Reede is an NSU fan who has spent significant time at other sports arenas while his children have traveled to play basketball. He says NSU has produced facilities that are among the best out there. “This is a Division I type facility, with a Division I type of attendance and following.”

The Wolves undoubtedly walk a two-way street of giving with their fans. For their part, the teams work hard to carry that tradition of success that continues to draw in spectators. Over the years, they’ve won championships and had players go on to play on international teams and enter the NBA draft. Fans have also gotten to watch some of basketball’s best and winningest coaches in action, like Bob Wachs, Bob Olson, Don Meyer, Paul Sather, and Curt Fredrickson. With their great history, combined with their reputation of caring for the overall well-being of their student athletes, it’s no wonder they’ve become the focal point for basketball fans across the region. People here who love the game have a team they can be proud of, and in return these fans have created an exceptional following that has made NSU basketball not just a sport, but an extension of who our community is. //–Jenny Roth