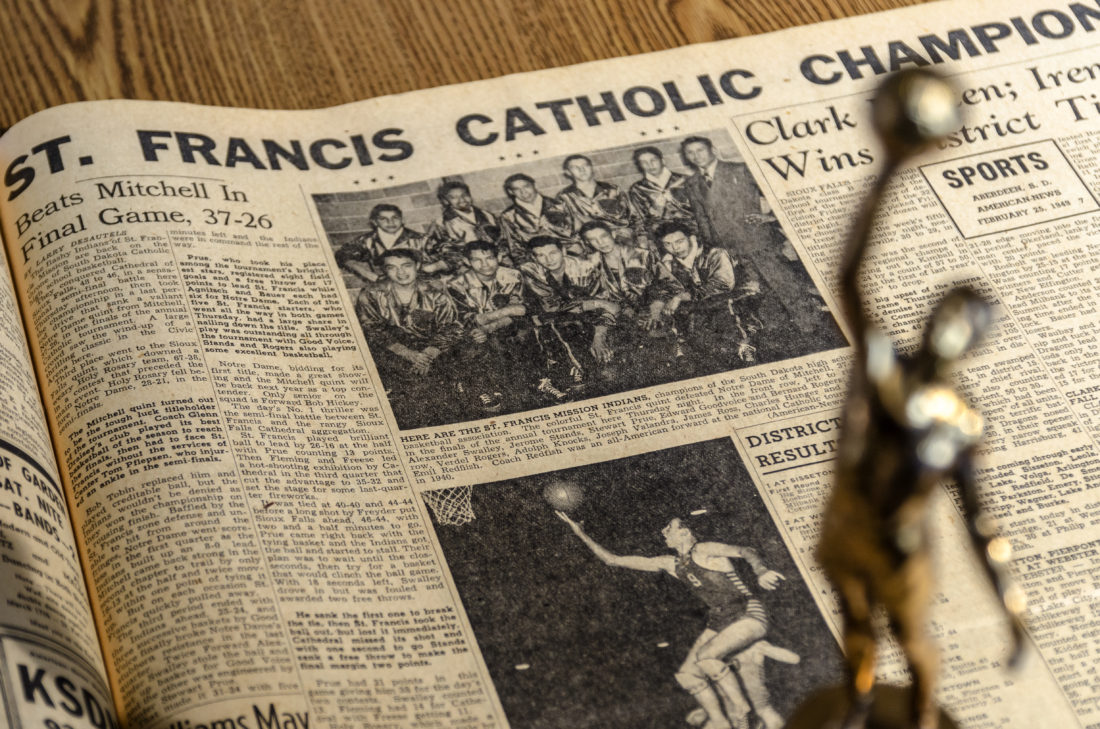 Your ticket to a classic tournament in South Dakota sports history

“Aberdeen’s reputation as a sports center goes on the spot tonight when the South Dakota Catholic high school basketball tournament opens at the Civic arena,” so announced an excited Aberdeen American News on February 22, 1949. If the event sounds odd, consider the article’s next sentence: “Closest school represented is 150 miles away.” 1949 was 15 years before Aberdeen’s Catholic high school, Roncalli, opened. Nonetheless, the Hub City hosted the tournament for its one and only time.

Prior to 1966, private schools could not belong to the South Dakota High School Interscholastic Athletic Association, and therefore could not compete in its state tournaments, even though they played their public school counterparts during the season. Frustrated, the Catholic schools formed their own Association and launched the tournament in 1937 in Salem. It ran for almost 30 years. Over time, the tournament, held annually in various cities, attracted 10-12 parochial and mission schools.

A bonus for the champion of earlier tournaments was a spot in a national Catholic tournament in Chicago, which Loyola University hosted from 1924-1941 in response to a University of Chicago tourney that excluded Catholic teams. St. Francis from Rosebud played in more than half of the Chicago tournaments, finishing in the top four three times. They sold tickets with their run-and-gun style and exotic heritage-the headline over a newspaper photo of the team said, “You Call It Huddle, We Call It Powwow.” The American News was also enamored of the Catholic tournament’s Native American teams: “What has caused more stir than anything else about the tournament is the fact that four of the 10 teams are from Indian schools. The Redmen have long been top drawing cards in the Hub City.”

Minutes of an Association board meeting during the 1948 tournament report “Aberdeen was mentioned” as a possible 1949 site, despite bylaws preferring that tourneys rotate among the member teams’ home courts. Growing crowds and the tournament’s sense of being “one of the ‘big Three’ of State tournaments” (said a press release) meant the small Salem and Madison gyms were impractical. A large sports venue in the state, the Civic Arena had already hosted several state tournaments in its first decade in operation. It’s not clear how, but the Aberdeen parishes and the Knights of Columbus and Catholic Foresters groups enticed the tournament to Aberdeen.

The three-day tournament began with a High Mass in Sacred Heart Church presided over by the bishop and attended by “all the team members as well as the students that follow their respective teams.” The religious school function typically featured fairly unique elements for sporting events. Confessions were held “so that all may receive Holy Communion.”

An exhibition game between ninth grade teams from St. Mary’s and Sacred Heart parishes launched the tournament. “The two teams are well-matched and might steal a fair share of the show,” the News predicted. Sacred Heart won the barnburner, 27-25. The tournament games started right after. True to the era, in only two games did teams score more than 50 points. On the last day, reported the News, “a large crowd saw the wind-up of a thrilling classic,” and “the flashy Indians of St. Francis Mission” climbed “back on the throne of South Dakota Catholic high school basketball” by defeating Notre Dame of Mitchell, 37-26. It should be no surprise that the team from a place called Immaculate Conception (in Stephan) earned the sportsmanship award. In a meeting held on the last day of the Aberdeen tournament (which adjourned in time for a Knights of Columbus tournament luncheon), the Association board discussed but rejected discontinuing the sportsmanship award, believing “it was the most important of all the trophies.”

That board meeting also considered Salem, Rapid City, and Mitchell for the 1950 tournament; the Corn Palace won. The 15 remaining Catholic tournaments were played in either Mitchell or Sioux Falls, with one in Rapid City. The tournament ended when, after about a three-year legislative and legal battle, private schools joined the Activities Association in the 1966-67 school year. The final words in a unique chapter in South Dakota sports history were written in 1975, when Aberdeen Roncalli became the first Catholic school to win a state basketball tournament. //–Patrick Gallagher