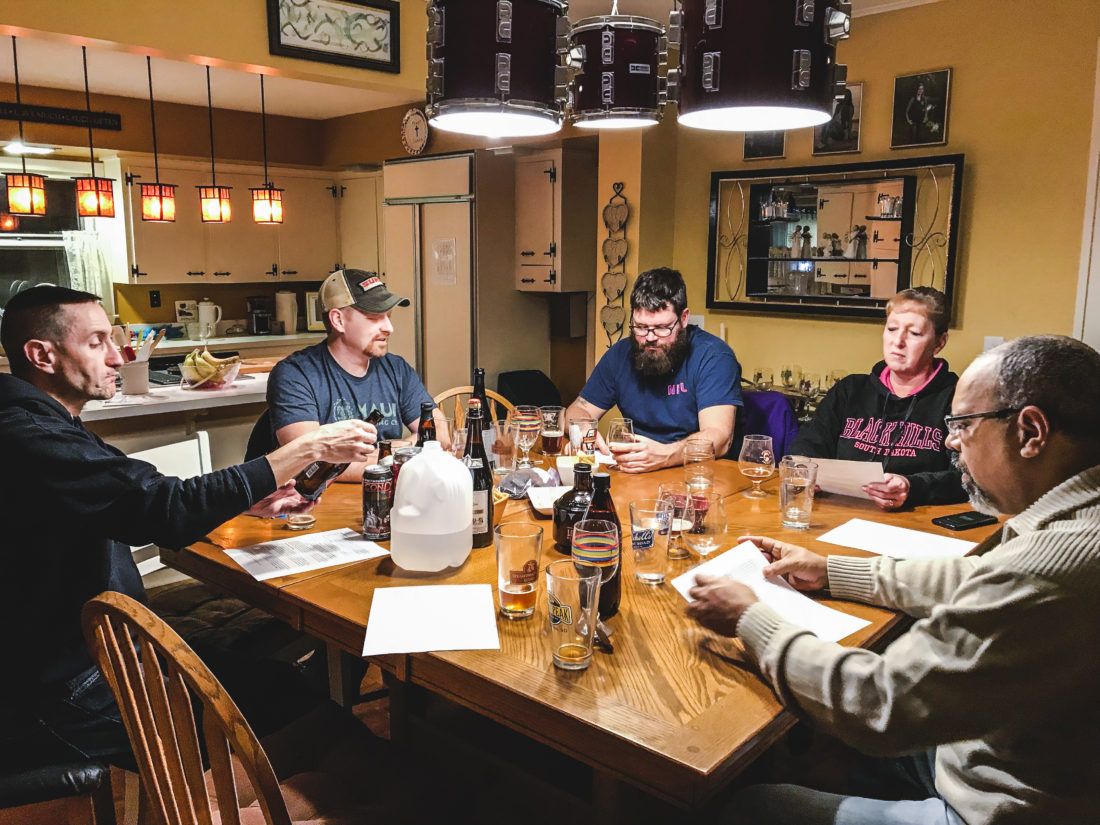 Tapping into the homemade crafts of local brewers and vintners

“If you can make oatmeal, you can make beer.” Keith Starks told me that a few times as I embarked on this adventure. Like all of my guides, he was evangelical about the joys of home brewing. But when I walked into Jason Spah’s garage for the October meeting of the Aberdeen Brewers and Vintners, I was overwhelmed by a huge stainless steel kettle with hoses and pipes, a heavy duty electrical box with lights and switches that looked like it should control a construction crane, and finally, a large cone-shaped steel contraption in Jason’s basement bathtub that looked like a still. Is this what it takes to brew your own?

The equipment was intimidating, but the people weren’t. Although they sometimes spoke in another language using words like specific gravity, carboys, dry hopping, conical fermenter, and wort (yes, there’s something called wort in your beer). They might as well have been talking about chemistry! That’s a joke, because that’s exactly what they were talking about, the chemical processes that make beer. When your kids complain about homework and say they’ll never use this stuff in real life, home brewing is your answer to why they should stay in school.

When it comes to brewing, the veteran there that night was Terry Beckler of the NSU Music Department. In 1990, he was in his first year of teaching high school band when, in a common brewer story, a friend got him into it. About ten years ago, Keith Stark, who owns Custom Coatings, received a Mr. Beer (an all-in-one home brewing kit) for Christmas, so he made it. “It was okay,” he says, “but I thought it could be better, so I bought a book and went from there.” Jason was the newest brewer, a nurse anesthetist who was lured into it by a co-worker a couple years ago, and now he may have more, bigger, and newer equipment than the rest.

Terry says in his early days the ingredients and supplies were limited. In fact, home brewing had only been legal for a dozen years when he started, as it took until 1978 to undo post-Prohibition regulations prohibiting home brewing. He says, “We were using terrible yeast and bad ingredients. Now there’s much better stuff available, and we make much better beer.”

The home brewing supply website, www.kegerator.com, describes the process simply: “You essentially heat water and grain (and/or extract from grain), boil the mixture with hops, cool the mixture, ferment the mixture using yeast, and then carbonate.” (Sterilizing is key too, but apparently not as sexy as fermenting.) The description gets at two basic types of home brewing, extract and all grain (there’s also partial mash, but it’s sort of halfway between). The all grain style involves mashing and lautering malts to produce enzymes that convert starches to sugar. Extract, on the other hand, is more or less the result of what happens in the previous sentence. Basically, you buy extract and add boiling water. Using the oatmeal analogy, extract is a little like instant, while all grain is more like old fashioned oatmeal. Most brewers start with the simpler and less expensive extract, and many move to all grain. The Aberdeen home brewers I met do all grain.

Either style allows the brewer some creativity to experiment with ingredients by manipulating taste and chemical reactions (science again!). At the club meeting, the guys each took home some wort to which they added a different yeast to see how it would taste. “Isn’t yeast, yeast?” my wife asks. Au contraire, says Keith, “Yeast can have a huge impact. Some types help other ingredients come through, and others are more dominant.” Brewers can also play with flavors, adding fruits or vegetables, sweets or sours. Terry brought a jalapeño beer to the meeting I attended.

He’s not in the Aberdeen club, but my Redfield High School classmate Francis Schaffer, who started brewing about 20 years ago, sees it more pragmatically. A partner in Precision Soil Management in Redfield, Francis’ day job is writing fertilizer prescriptions for farmers to get the best productivity from their fields, but when it comes to brewing he says, “I only purchase complete kits with instructions, always kits with malt extract, hops, yeast, priming sugars, etc. I have never experimented with ingredients using my own recipe, as of now anyway.” He concludes, logically, “If I’m going to spend that much money, I want the beer to be drinkable.” No wonder he was the valedictorian.

If you want to start home brewing, and if you want to get creative, you need the stuff. The Mr. Beer kit I have is simple and the true instant oatmeal approach, but more ambitious starters or advanced brewers need more. Unlike when Terry started, there are many resources: online, mail order, and downtown Aberdeen at Natural Abundance, where I talked to Brewing Supplies Manager, Seth Young. I had met Seth a few years before in a friend’s backyard when I was there to watch him and other brewers start some batches. Unfortunately, I paid more attention to sampling the ready-to-drink brews, and didn’t learn much.

Natural Abundance has everything you need to start or enhance the hobby. In addition to complete five-gallon kits, the store has a variety of equipment and ingredients, including more than 20 types of hops and malts, a dozen yeasts, and many extracts, as well as various sanitizer options, carboys, and hydrometers. The department opened about three years ago, after consulting with the home brewing group about inventory.

Natural Abundance may not have everything some hard core brewers want though, and like golfers, some guys just need the newest wedge. While Jason has enviable equipment, it’s not necessarily required. Some of his colleagues like challenges and have found opportunities. For example, Keith likes “to look at the expensive equipment available and figure out how to make it for myself.” He uses an Igloo cooler to mash grain. Terry boils ingredients in a kettle from Runnings and ferments in a large plastic bucket. He also kegs most of his beer, but also likes the bottle capper a relative found for him in a garage sale. And the club percussionist, well he repurposed a snare drum into a beer tap.

Besides the stuff of brewing, there’s the knowledge, which is widely available from online blogs and chat rooms, books, and human resources. The Aberdeen group’s main resource is each other, which was a key reason the club formed in 2013. Keith, who was one of the founders, says they “started the club to share experiences and ideas, teach each other, and share equipment.” Several members have responded to their colleagues’ urgent calls when they lacked equipment or ingredients.

Besides helping each other, the club does a brewing contest. “It’s basically for bragging rights,” Terry says. They also bring home brews to a tasting at Arts in the Park. The vintner part? Several club members make wine, but more focus on beer.

The club meets monthly, and anybody is welcome (contact the club via Facebook). Terry says, “You don’t have to brew your own, you just need to like craft beer.” We sampled numerous beers in the meeting I attended, both crafts and home brews. And it’s not just about the hard work of brewing and drinking, it’s about bling too, as there was lots of admiration for the various glasses Jason had picked up from brewery tours.

It seems that all kinds of satisfactions come from home brewing. It’s not the primary one, but Keith notes that, discounting time and equipment, “Home brewed beer may be as cheap as thirty cents a bottle.” But the costs are not insignificant. A young father, Jason joked that he thought he might recoup his investment by age 70. Pressed on what it all costs, he demurred, “Thankfully I have not tracked this, as divorce would be more expensive!” Perhaps on point, Terry is sure to keep a batch of his wife’s favorite, bourbon barrel stout, brewed at all times.

The guys clearly love their hobby and encourage others to try it out, and they convinced me. I took a stab at the Mr. Beer kit I’ve left unopened for too long to mention. It looks easy enough.