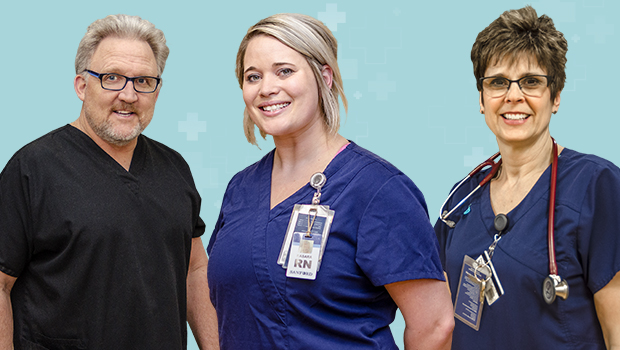 Very few professions require you to take care of others, oftentimes when they are at their worst physically and emotionally, day in and day out. Nurses have to think on their feet, pay attention to detail, and always put their patient’s needs before their own. The job can be tough, but while the challenges are great, so is the reward of being able to make a difference in so many lives every time you come to work.

The founder of modern nursing was Florence Nightingale. She gained attention for organizing nurses during the Crimean War in 18th century Europe, and earned the nickname ‘The Lady with the Lamp’ while making rounds for wounded soldiers in the middle of the night. Nurses and healing care had been around long before Florence’s time, but she’s credited for her pioneer work and educational role in the field. Her Florence Nightingale Faculty of Nursing and Midwifery, established in 1860, was the first secular nursing school connected with a fully serving hospital and medical school. It still operates in London today as the oldest, and one of the highest ranking, nursing schools in the world.

Every year we recognize the instrumental part nurses play in our society by celebrating National Nurses Week, which starts this year on May 6 and ends on May 12, Florence’s birthday. To thank all the nurses who do an incredible job every day in our community, Karen Stephenson, John Gillick, and KaSara Sutton share what it’s like to be a nurse in Aberdeen, and all the opportunities that come with their career choice.

Karen Stephenson from Redfield has seen a lot in her 35 years as a nurse. She first earned her LPN in 1983 at Lake Area Tech in Watertown, and then eight years ago after her children were grown, she went back to school for her RN at Sisseton-Wahpeton College. “When I first graduated with my LPN, we had to wear the white nursing uniform-white dresses and hose, white shoes, and white nursing cap. Now we wear the ‘Sanford Blues,’ as we call our navy blue uniforms,” she says.

Karen works in the ER at Sanford, a position that is often fast-paced and requires a great deal of critical thinking. “One thing I like about my day is the variety,” she says, “In the ER patients are here usually only about two hours, versus all day in other units, so we see a lot of people each day.” The ER can be full of high emotions and difficult situations, people are coming in very sick or after an accident, and nurses don’t get to react to the things they see, but have to react on how to handle it and take care of the patient. “When patients come to us they need help and aren’t on the top of their game, so we have to be on the top of ours. If I’m having a bad day it can’t get in the way, because those patients need me.”

Over time she’s learned that an important, and often challenging, part of taking care of others is making time to take care of herself. “I try to have hobbies that allow me to relax, and to do things by myself or with my family and friends that I can enjoy. My drive home from work is also usually my unwind time, it’s when I can digest the day.” Taking care of herself outside of work is how she ensures that she’ll be able to clock in for the next 12 hour shift, ready to put her own needs aside. “I like to hunt, fish, garden, camp, ride motorcycle with my husband, and spend time with my grandkids. These are all the ways I ‘recharge’ my own battery.”

Karen also mentions a big advantage of working in the medical field in Aberdeen. Here, our hospitals offer a wide variety of medical services with more specialties at the local level. This is beneficial not only for the public, but also for the nursing students at Presentation and Northern, because they’re able to complete their internships in town and get exposure to many areas while doing so. “We get to be a part of the shaping of their careers by sharing our experience and knowledge and helping them.” She enjoys working at Sanford because of how everyone jumps in to do everything they can for the patients. Their ER department has won several Press Ganey Awards, which recognize outstanding work environments and patient care. “I’m very proud to be a part of our team,” Karen says.

Adding Cheer to the Work Day

When asked about Avera St. Luke’s, where he’s worked as an ICU nurse since 2000, John Gillick quickly comes up with one word: family. “I’m always happy going to work. We have a lot of teamwork, and everybody pulls together and looks out for each other.” John grew up in Ipswich, and after high school moved to Rapid City to study engineering. What made him change his major and embark on a career in nursing instead? “All the physics classes,” he laughs. But jokes aside, the medical field had always intrigued him. His mother worked as a nurse for over 40 years in Ipswich, and his sister has worked as an OB nurse for 40 years as well. At the time, the School of Mines had a nursing program, so he made the switch and hasn’t looked back. “I didn’t think in high school I was going to be a nurse, but it’s a good field and very rewarding,” he says.

John worked in the open heart unit at the Rapid City Regional Hospital after graduation for four years. Then, he and his wife Lori, a respiratory therapist at Avera, spent time traveling all over the country while working as traveling nurses. After about nine years on the road, they came back to the area they grew up in, and raised their daughter, Ashlea, who is also a nurse in Fargo. John’s experience working at bigger hospitals in many different states gives him an even bigger appreciation for the cooperation among coworkers that goes on at his job in Aberdeen. He says the basics of nursing will always be the same, but that the biggest change he’s noticed in the field over the years is the advances in technology.

Nurses often see people dealing with a lot of anxiety and sadness, and John points out that part of the responsibility of being a nurse is trying to relieve them of that. The ICU is usually a serious place for patients and their families, as well as the staff. To help uplift everyone’s spirits, he tries to bring cheer and humor to the ICU whenever possible. For his efforts toward the well-being of his patients and coworkers, John received the One Pace Beyond Compassion Award in 2017. To receive the honor, a nurse first has to be nominated by a peer. Then, the Avera Sisters select a candidate who goes on to Sioux Falls, where a winner is chosen amongst all the nominees from all the Avera hospitals. John says he appreciates the award, and that his favorite part of being a nurse is making a difference for his patients. “It’s seeing someone when they first come in and are really sick, to hopefully getting them better, and then seeing them walk out of the hospital.”

Working as a Team

To shed light on the ways nurses provide compassion in all kinds of situations, Sanford Medical Surgical Pediatric Unit and Critical Care Nurse, KaSara Sutton, says, “I’ve helped deliver a baby in the same day that I’ve watched a patient pass away. We’re there on someone’s best or worst day, and have to be accommodating in each scenario.” KaSara is an Aberdeen native who comes from a family of health professionals; her grandmother is a nurse, as are six of her cousins. Growing up, she was first inspired to go into the medical field by her stepgrandfather, who worked as a nurse practitioner. After high school, she moved to Lincoln, Nebraska and finished her first four-year degree. She eventually came back to Aberdeen to take advantage of the accelerated nursing program through SDSU that takes place on the NSU campus. The accelerated program accepts students who’ve earned a four-year degree in any field. After completing the year long, intense coursework, students earn their bachelor’s in nursing. KaSara is now working toward her master’s degree to be a nurse educator, and teaches clinical and lab skills for the accelerated program. She says, “There’s so much a person can do with a nursing degree. You can work in a hospital or clinic, but also in schools, communities, or as a researcher.”

In her two years with Sanford, KaSara has noticed that in a hospital so many people work together for the good of a single patient, and that good communication is at the root of medicine. Providers, nursing staff, laboratory staff, respiratory staff, and other departments can all be involved in one care plan. “I love the teamwork mentality of the hospital. Everybody is there to make sure that the patient and family have everything they need, not only when they’re in the hospital, but when they go home. We want to make people better, but we also want people to be able to stay home and stay healthy.” One advantage we have in Aberdeen is that the communication doesn’t just stay within the walls of one hospital. She adds, “Avera and Sanford have a good relationship, they both offer different services, and they work together to find patients the services they need here in town versus having to send them elsewhere.”

What KaSara loves about nursing, in addition to the camaraderie she shares with her coworkers, is that every day is different. Each shift she gets to know new patients and families, and hear their stories. “We try to find ways to be there not just medically, but also emotionally, for patients and their families. Being that advocate, or that voice, for our patients is one of the biggest parts of our job.” // – Jenny Roth 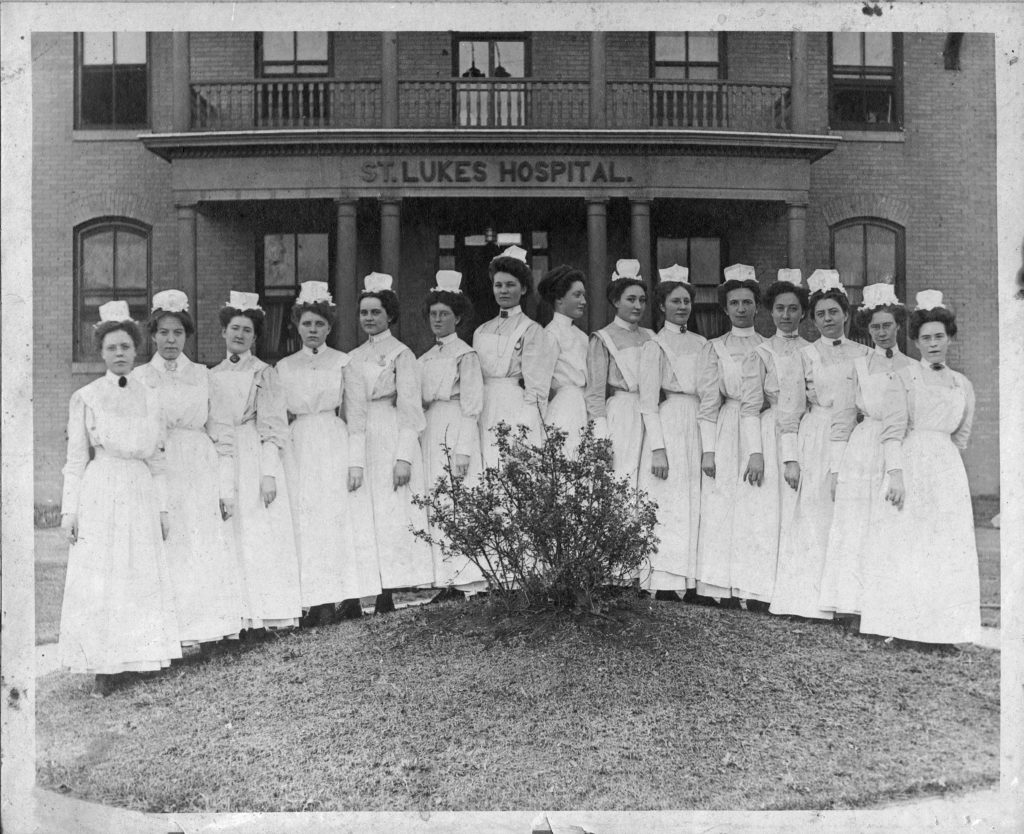 Aberdeen is Synonymous with Nursing Education

Any article about nurses wouldn’t be complete without a bit of history as to how and why nursing education is synonymous with Aberdeen’s roots. When the Presentation Sisters first set foot in Dakota Territory in 1880 — having just arrived from Ireland — they were tasked with educating the Lakota people and the French settlers. After moving around from 1880 to 1883 to teach along the Missouri River, Deadwood, and Fargo, Reverend Robert Haire invited three sisters to teach at Sacred Heart Parish in Aberdeen in 1886. Aberdeen’s status as a central hub made it the ideal location for the sisters to begin building a legacy of education. In 1901, during a deadly diphtheria outbreak, the sisters were asked to assist the sick. Despite the fact that they were teachers, with little background in medical training, there was a call for help that needed answering, so they went to work. In 1901, they stopped using their convent to house the sick and opened their first hospital – what Aberdonians know today as Avera St. Luke’s Hospital. The sisters’ involvement with the hospital soon led them to begin their own program to train nurses. They later expanded their nursing education by moving Mitchell’s Notre Dame Junior College to Aberdeen and renaming it Presentation Junior College in 1951. The Presentation campus was built after this time and opened in 1954. // – Troy McQuillen