Your City
Which Other Side of the Tracks?
By Patrick Gallagher | May/June 2018 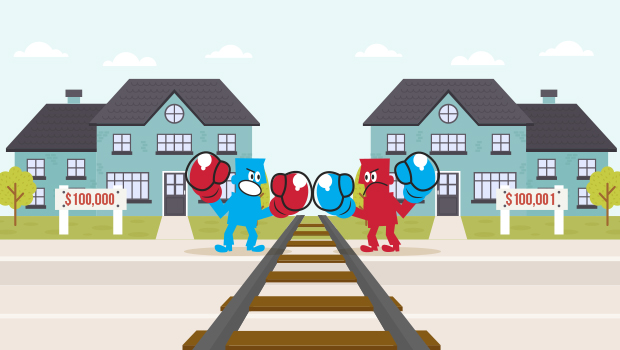 If you’ve lived in Aberdeen long enough, you’ve either experienced the old North-South Rivalry firsthand, or you’ve heard about it. While the apparent one-time physical nature of the division seems to have subsided-at least you don’t hear about pranks and fights between North Siders and South Siders-some sense of competition survives.

Whether you live north or south of the railroad tracks seems to mean something. Some see the roots in the two Catholic parishes in town. A century ago, the story goes, the Irish in Sacred Heart Parish, just south of the tracks, looked down on the German parishioners, and the latter persuaded the Bishop to open St. Mary’s Parish a few blocks to the north. That division allegedly colored the whole community, ultimately leading to such social media memes as: “A distinction between North Side society and South Side society,” and “the North Side was the ‘rich’ side and the South Side was ‘poor.’”

It’s not uncommon for the topics of income or home prices in the North and South Sides to come up in conversation, as well as arguments and suspicions about reasons for the differences-sometimes it’s downright conspiratorial. These are often what one generation heard from an earlier one rather than personal experience, but it’s part of the culture.

So is there anything to this? Are there facts behind it? Do North Side residents have more money and live in more expensive homes? In short, before I strangle you with statistics, the answer is yes. But it’s not that simple.

Generally, income is higher in the North Side, according to the U.S. Census. But first, a couple lessons: Within counties, the Census breaks areas into discrete units: blocks, basically the city blocks on which we live; block groups, which, well, are groups of blocks; and Census tracts, areas that typically include around 1,200 to 8,000 people. Aberdeen has 759 blocks, 23 block groups, and six tracts, but they don’t divide neatly at the tracks-and are usually not methodically drawn.

The following looks primarily at median values, which give you a number in the middle of a group of numbers-that is, half the numbers are higher and half are lower-rather than the average, which adds all the numbers together and divides the total by how many numbers you have. Averages can be skewed by a few very high or low values. Assume 10 people took a test. Three score 100, and the remaining seven score 74, 75, 76, 77, 78, 79, and 80. The median of 78.5, a number with five scores above and below, gives a better picture of what people know than the average of 83.9, which is almost four points higher than seven of the scores. Google it to get a definition with a higher average number of words.

The two Census tracts covering most of the North Side have the highest median household incomes in the city, and are the only tracts with more than 100% of the 2016 U.S. median of $55,322. The Census tracts with the lowest income are one in the southeast, extending south of the airport, and one in central Aberdeen, including several blocks around 6th Avenue and Main Street. In 1999, the same two North Side tracts were at the top, but only one inched over 100% of the U.S. median of $41,851.

Drilling down, however, the block groups reveal variation. The top 10 groups for income, for example, break down equally, five north and five south. One block group mostly in the northeast quadrant, which starts literally at the railroad tracks on Milwaukee Avenue and goes as far north as Prairiewood, has the city’s highest median household income of $93,917 – 170% of the U.S. median. Another group in the same tract has a median income of $35,063. The group with the second highest income in the city is almost a mirror image of the first, sharing the Milwaukee Avenue boundary but running south of 135th Avenue and mostly east of Dakota Street. Median income there is $85,150 – 154% of the U.S. median. Next to it is the block group with the lowest income in town, $27,381, less than half the U.S. median. In other words, the income picture is pretty patchy.

What do home values tell us? Do the rich live in more expensive homes? The Census again offers some information. The data here only allow us to compare 2000 and 2016 somewhat reliably; “somewhat reliable” also applies to the Census definition of home value: “the respondent’s estimate of how much the property (house and lot) would sell for if it were for sale” (would you lowball or highball in talking to the Census?). The two North Side Census tracts with the highest income also had the highest median home values in 2016, $172,900 and $169,300. In 2000, they were 1 and 3 on the list, both at less than half their 2016 values. A southeast tract was #2 in 2000, but dropped a spot in 2016 because it only increased 100% in value, while the North Side tracts jumped more than 115%. The center city tract with the second lowest income has the lowest home values at $91,300; it was lowest in 2000 too. Only four block groups are higher than the U.S. median home value, $184,700. The block group with the highest income also has the highest home value at $244,900 – 132.6% of the U.S. median. Two of the remaining three above the national level are also North Side. As with income, however, the top 10 groups for home values are split five on each side of the tracks.

Considering other valuing methods, Amy Frink has been appraising homes in Aberdeen for 20 years. She gave me values for some homes-unidentified except for part of town-appraised a few years apart. The homes on the North Side appreciated more between appraisals than South Side homes. Because the time between appraisals wasn’t the same, I calculated change per year. This showed the North Side homes increasing by at least 3.1% per year, compared to no more than 2.82% on the South Side.

Appraisals are partly based on home sales, so let’s look there. Realtor Nancy Jark gave me home sales reports for a recent one-year period and for 10 and 20 years ago. One set of reports bisected the city north and south, and the other, east and west-so by halves, not our addresses’ quadrants (yes, these halves overlap, for example, combining NE and NW in one case, and in the other NE and SE, but they give us different ways of looking at the city). Historical prices may look a little different than you expect-but they end up there. In 1998, the South Side’s median sales price, $73,000, was higher than the North Side, which actually came in last, but the West Side’s $76,000 topped them all. Ten years later, the North Side had left the other parts of town in the dust, as its median sales price nearly doubled, to $132,500. In that year, the South Side came in last, at $112,000. In 2017, the highest median sale was again in the north, at $174,500, and the lowest was the west, $147,250. The south was third, $158,000.

Ultimately, all these values have nothing to do with appraisers or real estate agents preferring one side or the other. They respond to their clients. Nancy Jark says, “I rarely get the directive of North Side or South Side only. Clients look for specific types of homes and amenities, then it comes down to other factors, like where do I work, where is the school, having to cross the railroad tracks” (meaning to avoid trains, not people). It’s the buyers who decide what they want and are willing to pay. It’s not called the housing market for nothing. The Catholics might have started it, but it’s the good old American trinity-market, supply, and demand-that really drew the line.

The Price of Everything

As is often the case, the big picture stereotype has truth to it, but when you look more closely, like those old pointillist paintings, the picture gets fuzzy. The north side broadly makes more money and has more expensive homes, and vice versa in the South, but not everywhere. And is that the whole picture anyway?

The bottom line seems to be a question of value vs. Value. What do you value? I’ve listed lots of dollar amounts here, but there’s a risk in accepting money as the only measure of value. Any of us may want a doctor’s salary, but if we hate the sight of blood, we won’t value the job-we’ll hate it. The value of your home depends on what you put into it-a new kitchen or garage-but also the memories and the life you make in it. // – Patrick Gallagher