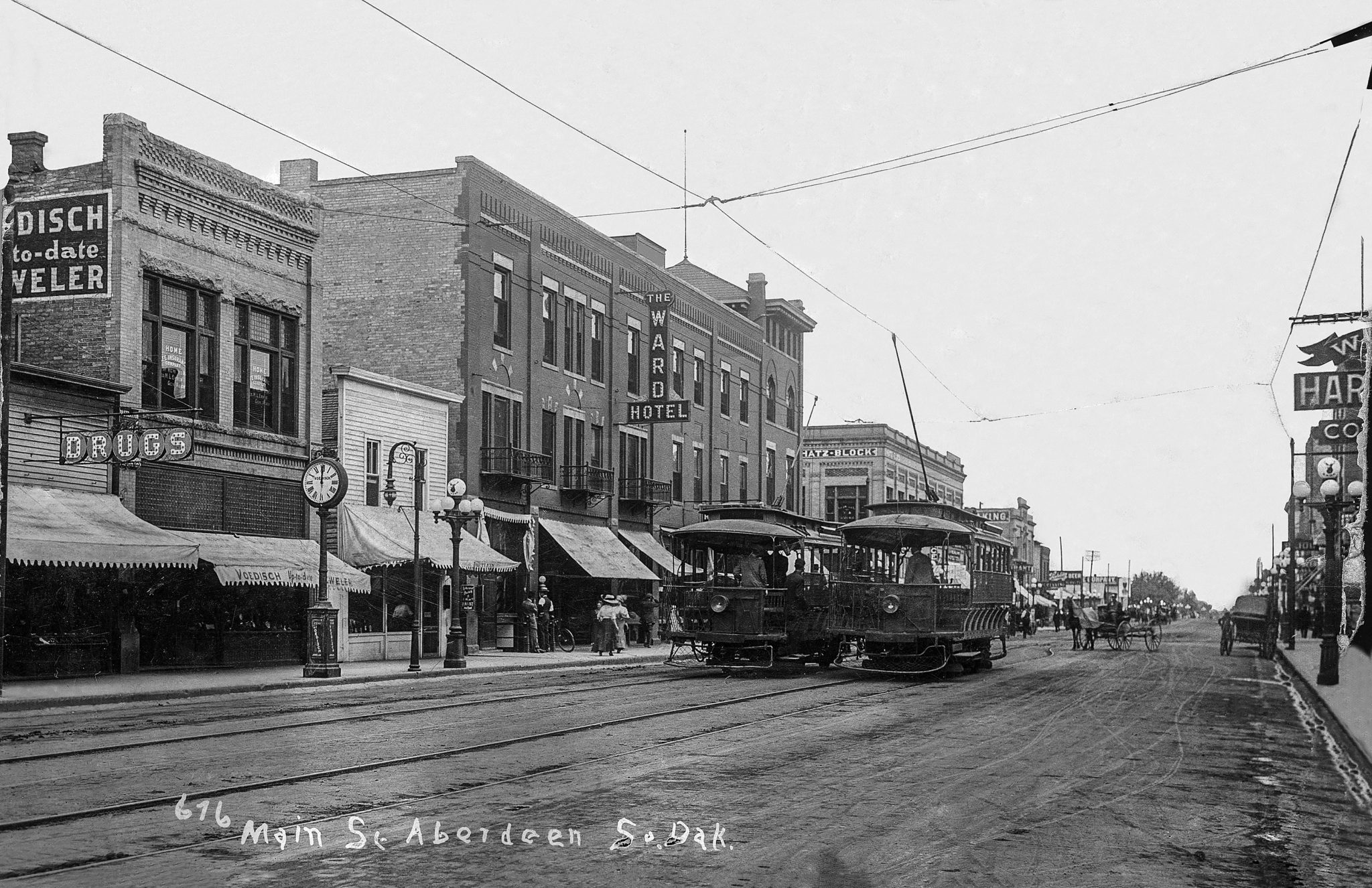 A trip through the history of Aberdeen’s transient streetcar system

Due to the recent interest in a replica trolley shuttle business here in town, I decided to finally write a story about Aberdeen’s popular streetcar system. However, the reality is, the story isn’t all that dramatic or overly interesting (though it is to me for personal reasons that I’ll discuss later). I rely on a book about Brown County’s history written in 1980 for facts about the region’s development. In the nearly two-inch-thick volume, only about four paragraphs were dedicated to the streetcar system. However, there are quite a few pictures around of the Aberdeen “cars” that are just so cool to look at. Many cities had streetcars, just like many cities had roads. They were simply a means of transportation. Aberdeen was the second city to install a trolley system in South Dakota. Sioux Falls was the first.

Aberdeen was plotted and planned by very forward entrepreneurs who consistently risked a lot to make a buck, and to advance the city. In 1941, an elementary school was dubbed, “Howard Hedger” because it was built on land donated by these two gentlemen, not one guy named Howard Hedger. Neither lived long enough to see the school, but much of what they invested in shaped our city and, here’s a stretch, they are the reason you’re holding this magazine.

The year was 1886. An Iowa company was given permission to install a streetcar system in Aberdeen. The company never delivered. Two years later, another outside company again convinced the city to let them build and operate a system. They actually broke ground and began construction. Unfortunately, the brash members of the Aberdeen community revolted and physically halted their progress. Seems they didn’t want to be exploited by an outside “monopoly.” After this, two other attempts were made to raise money and enthusiasm for public transportation. They both flopped too. 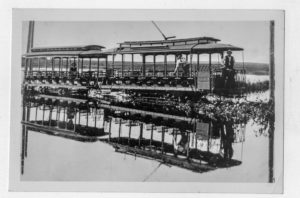 This picture shows the open cars used in the summer. The car on the right was the engine car, while the one behind it was simply a trailer car. On the way to Wylie, in one particularly marshy area, the tracks were actually under water.

It took about 30 years after its plotting for Aberdeen to finally get a trolley system. Eight successful entrepreneurs funded a streetcar company called The Aberdeen Street Railway Company (later, Aberdeen Railway Company). The man at the top of this endeavor was Charles A. Howard (of Howard Hedger fame). This was the period when Aberdeen and Columbia were fighting for the county seat (see Aberdeen Magazine, May/June, 2018). Both Howard and Hedger were involved in the county auditor and register of deeds offices, so they moved back and forth and ultimately settled in Aberdeen when it won the county seat. Howard then joined an existing abstract firm in Aberdeen. When he got called up to lead a regiment into the War of Philippine Insurrection in 1898, he entrusted Hedger with his firm, Coe and Howard Abstract Company. Upon returning (as a Major and a hero), he was so impressed with Hedger that the two formed a partnership.

Howard and Hedger then conceived of their own residential development for Aberdeen and plotted a new subdivision up north. It was built on higher ground than downtown, a bit out in the country away from the smoke of coal and trains, and had wide streets with a median going down the center. They developed the Highlands District, straight north of downtown Aberdeen. It was to be a bit exclusive, with one house per quarter block. Room to breathe, as they described it. And to kick things off, Howard and Hedger each built similar homes on Main Street, on opposite sides of 12th Avenue. The homes were designed by J.W. Henry and still stand today.

But how would one get to such a new development, a mile from the city’s core? A streetcar, of course. Just as the plans for the Highlands were advanced, so too was the idea for a home-grown trolley system. And both Howard and Hedger were the two biggest investors in the street railway. Electricity was finally becoming a reality for the city, so a new, modern housing development fed by a new, electric streetcar seemed like a winning combination.

The layout of the track was very strategic, as one would expect. It connected Northern Normal (now NSU) with Wylie Park from north to south, and made several diversions to the east to include St. Luke’s Hospital and other railroad depots. Each depot was within one block of a streetcar line. Oddly enough, the tracks only went down three blocks of downtown on Main Street. In this area, in front of the Ward Hotel, there were double tracks, so cars could pass each other if going in opposite directions. Howard and Hedger wanted to protect the serenity of their Highlands District, so they encouraged the tracks to jog over to First Street and continue north to the “car barn,” or service barn for the cars. The car barn was located just off 15th Avenue NE, to the north, right in the front yard of what is now Presentation College. The line continued north to Wylie Park, which was the place to go in the summer. 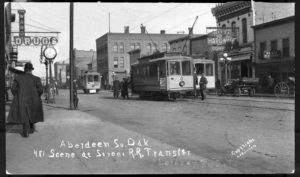 The Witte Hardware building behind the streetcars is the Sander’s Sew-N-Vac building. The museum building is in the background (Northwestern Bank building). Double tracks were built here so streetcars could pass one another if going opposite directions. The clock on the left was a promotional clock for the jewelry store. Due to inconsistent timepieces (watches, the court house, etc.) this clock was deemed the “official” time for the streetcar schedule.

Six reversible street cars arrived in Aberdeen in October 1910. The cars could be driven from either end so that they didn’t need to be turned around at the end of the lines. The company maintained enclosed cars for winter (with pot-belly stoves for heat) and open cars for summer. The first streetcar hit the tracks on Thanksgiving Day 1910. As you can see in the pictures, these were electric-powered trolleys. A web of overhead wires was hung on buildings and poles all throughout town, and to this day you can still see wire brackets on some of the older buildings.

The streetcars were very popular. Fares started at just five cents for adults (and dogs). Sports events at both Northern and Wylie’s baseball fields constantly taxed the system and stressed out the motormen operating the cars. On the first day, 5,000 fares were collected. The fares didn’t seem to match the number of riders, but the loss was shrugged off as a good first run. As it would turn out, summer profits were high, but winter months quickly eroded gains. 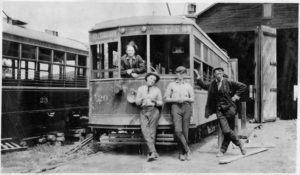 The Car Barn (streetcar maintenance and storage shed) was located just off 15th Avenue NW, which is now the grassy area at Presentation College. A.F. McQuillen is on the right.

It is surprising to know that automobiles were already on the scene in Aberdeen when the streetcars started. In fact, by 1912 there were over 400 automobiles in Aberdeen. As one would expect, the cars eventually rendered the streetcar useless. While the venture never appeared to be overly lucrative for the investors, things got bad in the 1920s. They raised the price of a fare to ten cents in 1921, but a few months later they slashed it back down to five cents. This caused a bit of a rider frenzy, but wasn’t enough to make it worth while. Plans were made to end service and sell the system off. However, everything shut down abruptly a few months earlier than planned, on July 31, 1922, partly because of the resignation of the system’s superintendent, A.F. McQuillen. My great-grandfather.

Much of the equipment for Aberdeen’s streetcar system came from Duluth, MN. A.F. McQuillen was an instructor for streetcar motormen, and was heavily involved in the streetcars in Duluth. Charles Howard summoned him to Aberdeen for $75 per month. He came a few weeks before the inaugural run of the streetcar, and was employed as the superintendent of the Aberdeen Street Railway for its entire time of operation. No one knows why he resigned. Charles Howard announced the closing of the streetcars early because of his resignation and the fact that the city would not make a decision to take over the railway or not. For its entire existence, the streetcar company was privately operated, but probably should have been subsidized by the city, as it was important to Aberdeen’s development.

All businesses, even if they are only viable for a short time, affect the lives of those involved. The streetcar system lasted just 12 years, yet was instrumental to many generations of my family and our involvement in Aberdeen. Many McQuillens came through Aberdeen because of the streetcars, just like countless other families land here for work and stay, or leave. After the streetcar system closed, A.F. decided to stay in Aberdeen and went on to produce a large family. That’s why I’m in Aberdeen today. I don’t know why he decided to stay here. Perhaps in 1922 it was a great, safe town in which to raise a family. And, it was, after all, the Hub City. Several months later, A.F. would be contracted by Charles Howard again to prep the streetcars for sale to another city. The cars were loaded onto flat train cars and shipped out in February 1923. // – Troy McQuillen 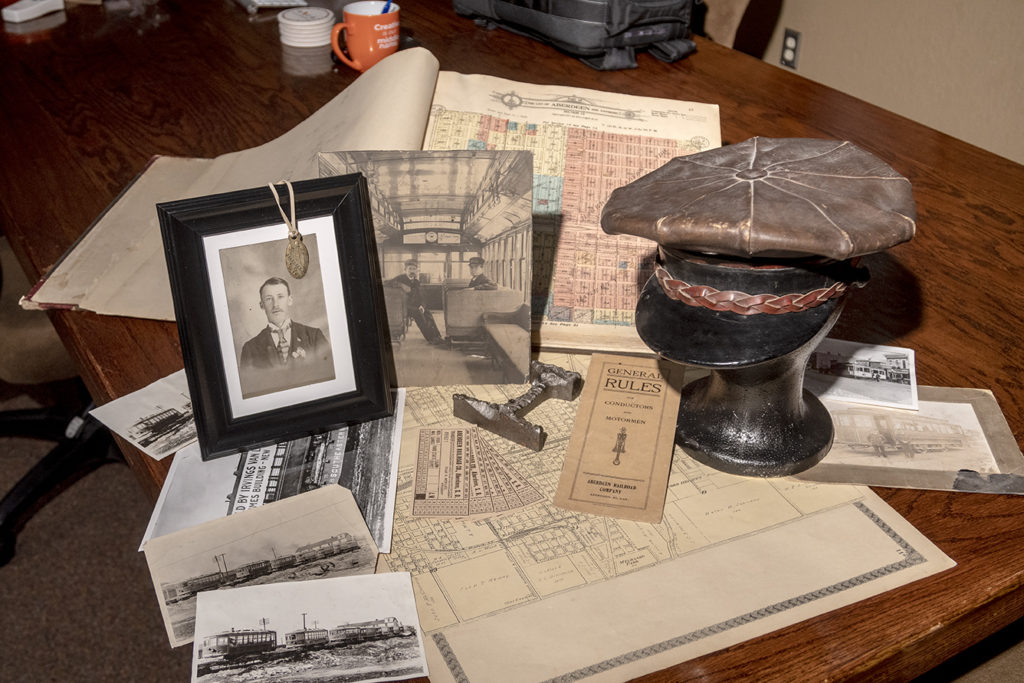 Sources and Credits: As usual, I tapped the many books by the late Don Artz, including The Town in the Frog Pond, The Life and Times of the Dacotah Prairie Museum Building, and his annotated version of A Souvenir of Aberdeen, The Railroad Hub of the Dakotas. Sue Gates at the Dacotah Prairie Museum is always generous with photo research and usage rights. Many of the details came from a 1993 paper submitted for a class to Northern State University by a student named Michael Glau. The paper is thoroughly researched using newspaper articles of the period, artifacts at the museum, and an extensive interview with my grandfather, Cliff McQuillen, A.F.ís son. Other facts, artifacts, and photos came from our personal family collection kept by myself, David, and Gordon McQuillen. I also stumbled upon some handwritten notes from A.F. McQuillen in the K.O. Lee Aberdeen Public Libraryís clipping file providing some specific details of the streetcar routes.