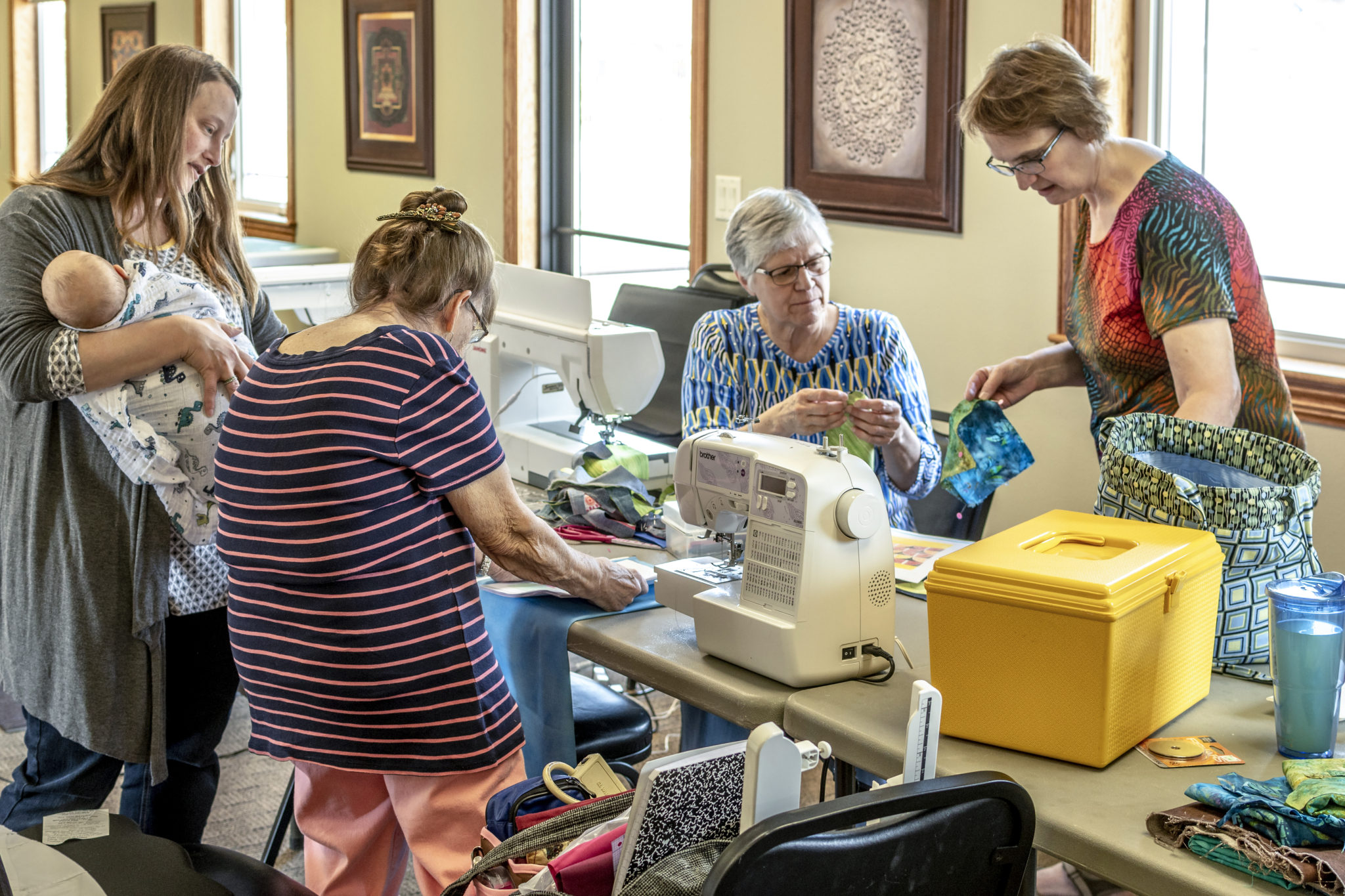 The stories behind the stitches of Aberdeen’s three quilting guilds

Art is meant to be admired. Quilters take that one step further, and create pieces that aren’t just made to be hung on a wall and appreciated, but are at their best when being useful to others. Aberdeen Area Modern Quilt Guild member, Lucky Peterson, explains what quilters love about their craft. “Quilts are made to be used, not just looked at. We love it when people can throw them on the ground, and build forts and play with them. It’s neat when you can see your art really being used like that.”

The Aberdeen Area Modern Quilt Guild is one of three quilting organizations in Aberdeen. They officially formed in 2014, making them the newest group to the area. Lucky says, “We wanted to get together and explore modern quilting, and what that looks like both here and nationally.” The definition of modern quilting can have a wide continuum of meanings, but generally speaking, some characteristics of modern quilts that distinguish them from the more traditional styles are large expanses of negative space, bold colors and graphic prints, minimalism, and alternate grid work. The modern quilters have nearly 15 members that range in experience from seasoned quilters to beginners who are just learning the art form. They meet monthly at various locations around town to expand their knowledge on modern quilting patterns and techniques.

Many quilters pick up the hobby because they want to make a gift for someone else. About six years ago, Lucky was helping to manage The Fabric Bin, but hadn’t yet gotten into quilting. After making a wonky nine patch quilt for a friend’s baby, his wife (girlfriend at the time), who was a quilter, encouraged him to give quilting a try. “I wasn’t so sure. I had done the wonky nine patch because in that pattern things don’t have to line up, and I was always afraid to try quilting because things never line up, but I did that quilt and then looked into modern quilting, and thought I could do that.”

Betty Dobberpuhl is a founding member of both the Aberdeen Area Quilt Guild and the Candlelight Quilt Guild. She also talks about how quilters love to give their finished products to others. At the monthly meetings for both guilds she belongs to, members gather together with grocery bags at their feet. These bags are filled with the projects they’ve brought for the “show and tell” portion of the meeting, where they get to share with others what they have been busy creating. Betty says, “The things that come out of those bags, I think, ‘You’ve got to be kidding me,’ everything they bring is just beautiful. And then they’ll say, ‘I made this for my grandchild,’ or ‘I made this for this person.’” Along with giving to friends and family, the guilds often donate their quilts to places like the Ronald McDonald House in Sioux Falls, the Salvation Army, the Aberdeen Police Department, and local hospitals and nursing homes.

The average price for most quilting fabric is about $11 per yard. Other expenses can include your pattern, the insulating batting layer between fabrics, the backing, and any tools and equipment like rod cutters or cutting mats. After purchasing supplies, the next thing put into any quilting project is time. It takes hours to cut, piece, and sew everything together in intricate detail. All of this might sound like work, but Betty says it’s the opposite. “People will look at a project and say, ‘Wow, that looks like it took a lot of work!’ But if it was work, I wouldn’t do it! I call it pleasure.” For most quilters, quilting is simply “good for the soul,” and a way to relax and take your mind off of other things.

Betty and her friend, Darlene Jaeger, now of Big Stone City, formed the Aberdeen Area Quilt Guild 25 years ago. Darlene is a very accomplished quilter, and when Betty heard she wanted to start a quilting group, she reached out and offered to help. She jokes, “Darlene knew what she was doing, but me not so much. So the story goes at our first meeting I made the name tags, and Darlene did everything else.” Today, the guild meets monthly and has members from Aberdeen and numerous surrounding communities. They’ve always met at the Aberdeen Recreation & Cultural Center, first when it was in the old Monroe Building, then on State Street, and now at its current location in the former Aberdeen Central School. “The ARCC has been wonderful to us-always so great to work with and helpful. We’re very fortunate in that.” Along with “show and tell,” each meeting has a unique presenter who gives mini courses on different sewing and quilting techniques.

The Aberdeen Area Quilt Guild has always met during daytime hours. Realizing that there might be people who worked who would also want to enjoy quilting together, Betty decided to put a notice in the newspaper to see if anyone would be interested in quilting in the evenings. The response was huge, and the Candlelight Quilt Guild quickly got underway. During their first meeting, they chose a president and officers, and started coming up with their own programs. Betty laughs, “I found someone who was a great quilter to teach the presentation at the first meeting, and again I made the name tags. After that, the group just took off.”

The Candlelight Quilt Guild is run very similar to the Aberdeen Area Quilt Guild. Peggy Hallstrom is their current president. During the day, she works as the registrar at NSU. She says she knew how to sew growing up, and that she made her first quilt to take with her when she was going away to college. Peggy mostly does hand quilting, and her fellow quilters call her talent “phenomenal.” For her, quilting is a joy and a good way to relax and unwind after a busy day. “I like fabric-the colors and feel- and being able to choose the ones you like and put them together in interesting ways to make something useful that you can put on a bed, or hang on a wall.” She adds, “Quilting is kind of an obsession for some of us!” // – Jenny Roth