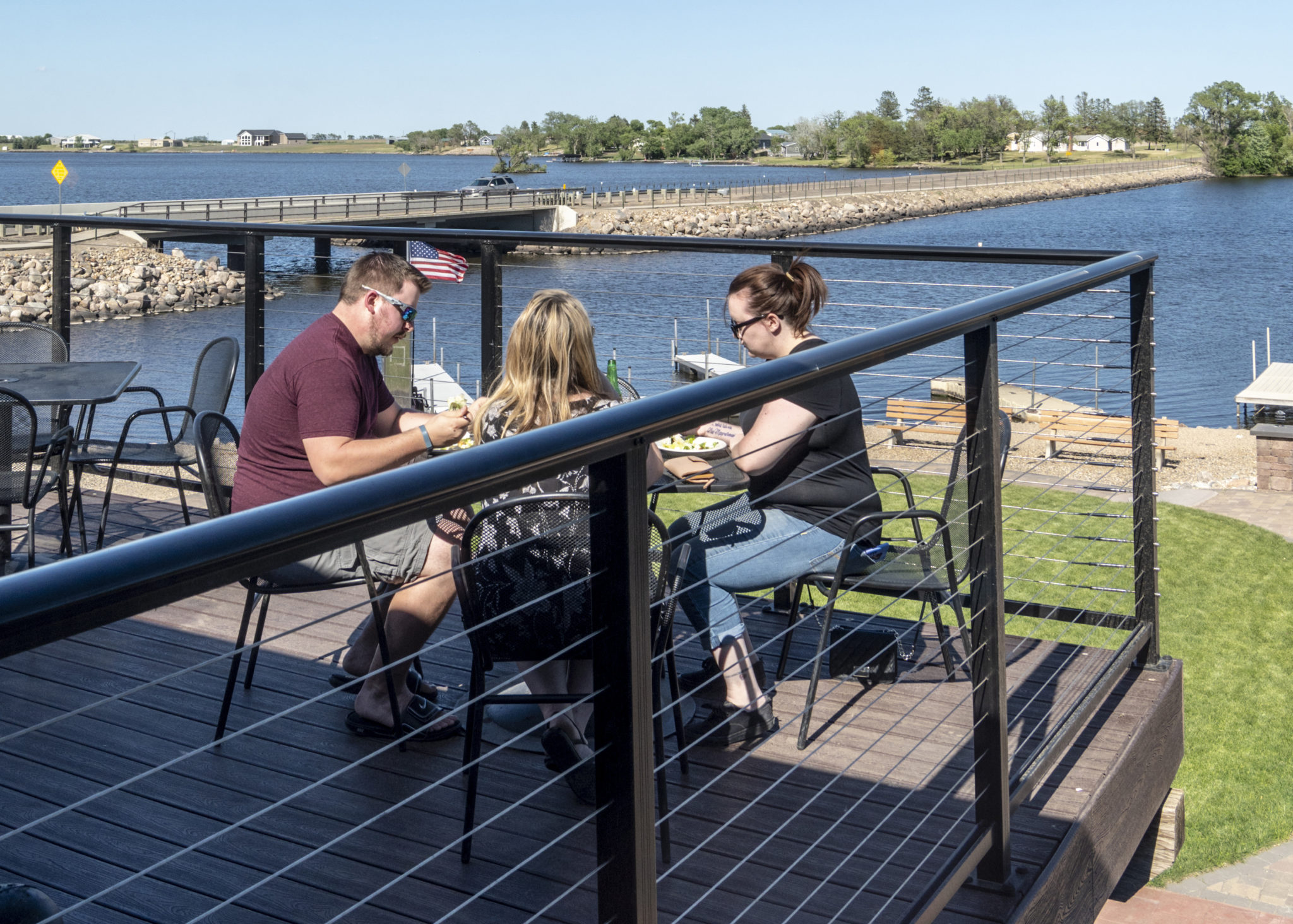 Your guide to dining outdoors in the Hub City

Eating on an outdoor patio is one of the delights of nice weather. Warm days are all too rare in the frozen north, and when we can be outside, we like to be. In an appreciation for the outdoor dining options we have in Aberdeen, the following is a look at restaurants in our area that serve patrons on the patio. To draw the line somewhere, I didn’t include fast food places, coffee shops, or other establishments with outdoor tables where you serve yourself. I also won’t dwell on the wind. It’s a part of life on the Plains, and you deal with it. I remember seeing waves in my beer on one patio, but being outside and being served was worth it. Without further ado, here is everything you need to know about outdoor dining in the Hub City. 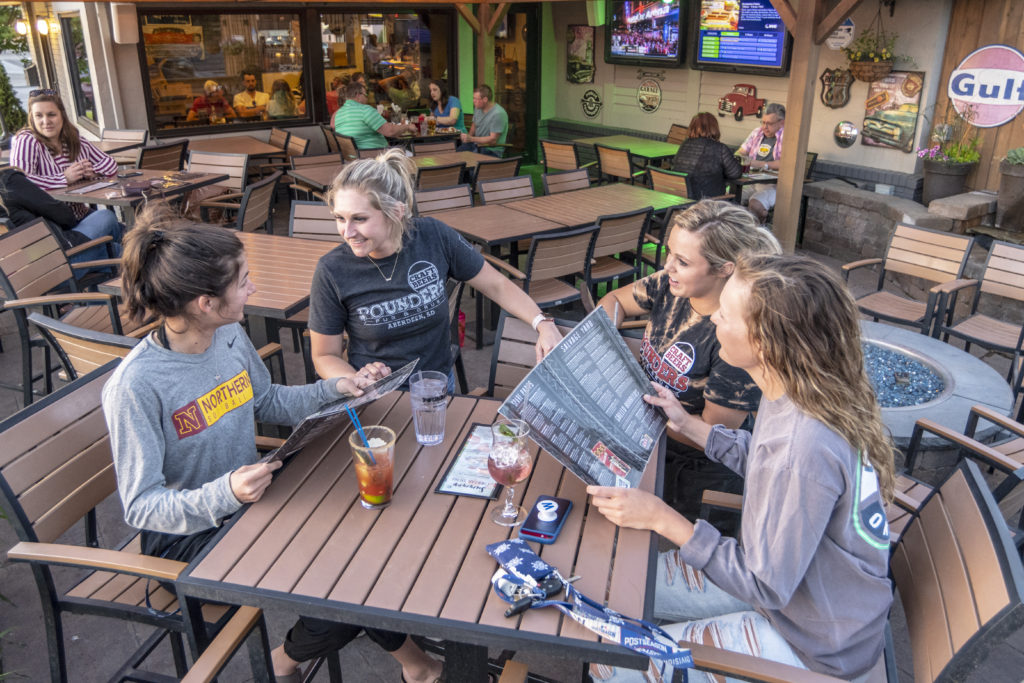 This is one of the nicest patios in town, and one of the newest. Beware however, the taps out there are misleading. Itís not serve yourself. It reminds me of Bruce Springsteen’s “American Land” (I’ll take any chance to proselytize for the Boss): “Dear, I hear the beer flows from the faucets all night long.” Not! The taps are real, but thatís water flowing out-one of many fountains on restaurant patios, it earns kudos for relevant originality. The lattice roof provides some protection from the sun as does the pull-down shade on its west end. I’ve never tried the heating pit, but itís a nice addition for evenings and to extend the season.

The seating scheme puts high top tables along the patioís west edge, effectively blocking the view for patrons sitting at the regulation-height tables in the interior-but then the view is of Merton Street. The high tops might make it easier for everyone to see the wall-mounted TVs, but itís always been too bright for me to make out whatís actually on the screen. The patio seats about 50 people, making it pretty much the largest capacity outside spot in town.

This fairly spacious patio probably has the smallest seating capacity-maybe because the fountainís location limits table arrangement. Nicely, however, it never seems crowded. Without a roof, it opts for tables with umbrellas. The location on the east side of the two-story building means the patio is in full shade as early as late afternoon, which is a benefit (and it’s a great wind block–if the South Dakota wind ever happens to blow from the west). It’s also tucked behind the bakery, so it’s somewhat shielded from Sixth Avenue. 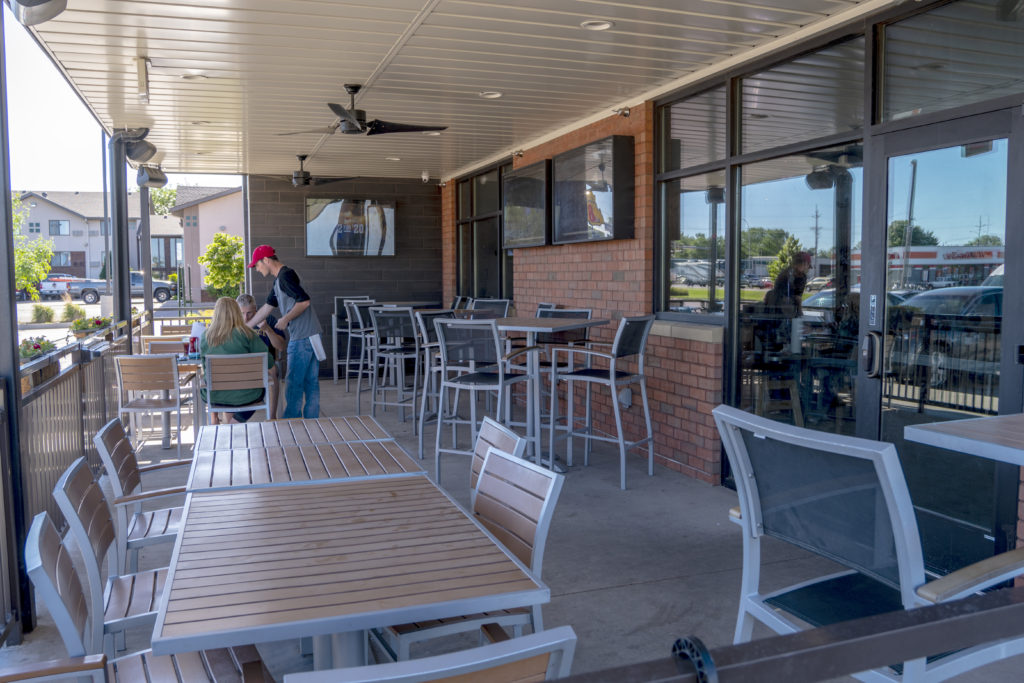 Another new outdoor place, it’s pretty compact, fitting into the basic footprint of the restaurant, but it still seats about 30 people. It also has TVs on the walls, and although itís on the east side of the building – which, along with the roof, protects patrons from the sun – it’s usually still too bright to see whatís on the screen. While the roof covers the whole patio, if you’re seated along the south-facing railing, you’ll catch the sun. But you’ll be at a low table, if that helps, because Wings and Rings reverses Poundersí theme, putting high tops along the inside walls.

A benefit here is distance. Unlike other patios on Sixth Avenue, this one is the farthest away from the traffic, although it looks directly at the street (through the parking lot). All in all, the Wings and Rings patio is functional and efficient. 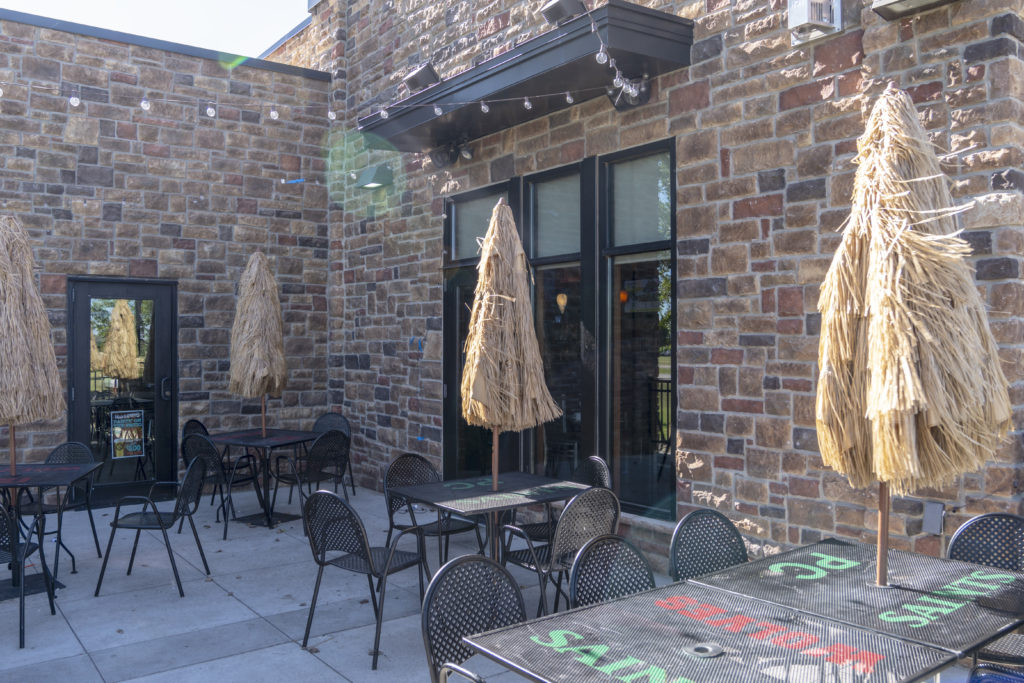 Usually set for about 20 people (choose a Wolves or Saints table), Max & Erma’s has an interesting site in northwest Aberdeen on, but still half a football field from, Highway 281. Because the patio is on the southeast side of the building, you look out on traffic, but it’s usually not obtrusive. The roofless location can be warm as it catches the summer sun for long parts of the day, but umbrellas are available. Niched into a corner of the building, it’s a simple, pleasant place. 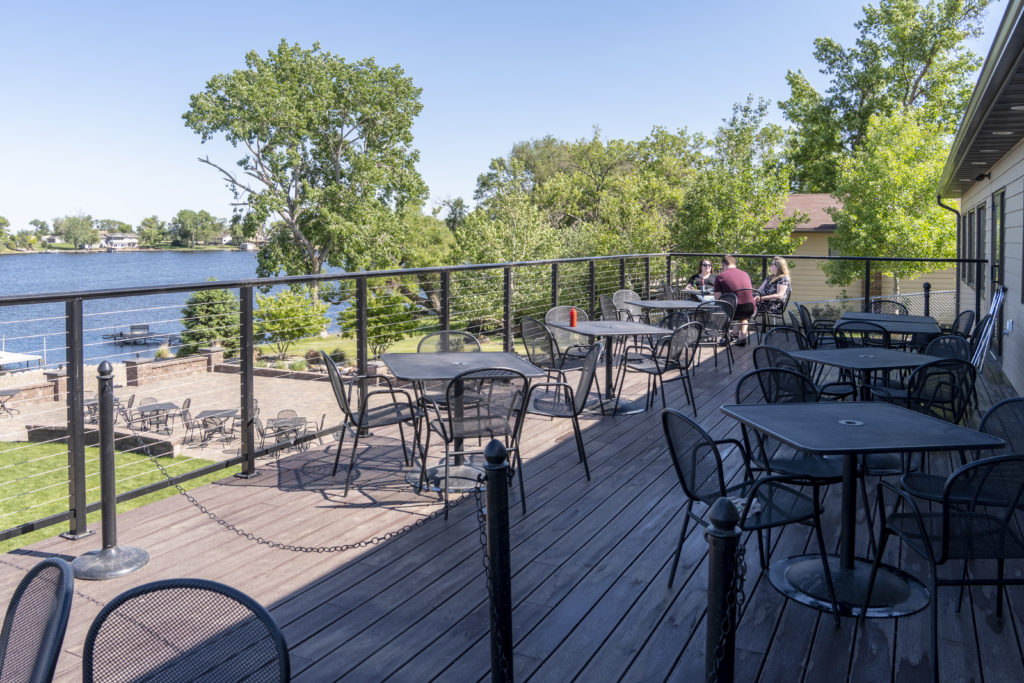 While it’s not in city limits, Wakeside’s balcony definitely merits mention. Pretty much a no frills place-no roof, no fountain (though there’s water nearby)-it relies on umbrellas for its handful of tables. Once there with a couple people, we sun dialed, moving around the table to stay in the shade. It’s the only outdoor seating area where there can be live entertainment (on the patio below). What makes Wakeside more special, of course, is its location looking down on Mina Lake. What could be more relaxing? Miles away from the main highway and traffic sounds, it’s very serene. The boats and jet skis could feel like Sixth Avenue, but since they slow down to go under the bridge on Old Highway 12, it’s peaceful. For the view, Wakeside wins, hands down. It’s a great place to spend an afternoon sipping a beverage. 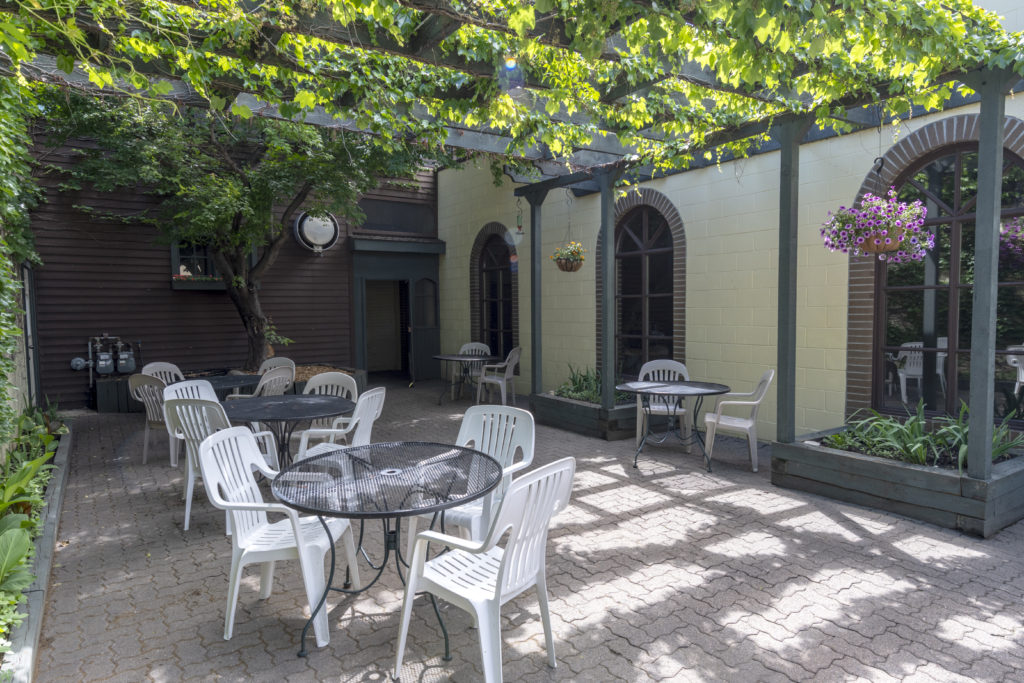 The exception to the table service rule here is Canterbury on Main Street. You pick up your tray at the counter and carry it outdoors yourself. Some guests may not even know Canterbury has a patio. Tucked away behind the shop, it’s really a lovely place. A kind of trellised canopy with vines snakes overhead, providing naturalistic protection from the sun. Greens climb the walls, and the patio is bordered by flowers and vegetable plants. The whole area is watched over by a tree near the restaurantís back door. Surrounded by walls, the view is only a few feet away, but it’s an enjoyable and exotic space-not exactly the middle of Aberdeen’s urban jungle, but it could be almost anywhere.

Aberdeen is fortunate to have the patio eating options it has, and even more would be better! People watching is one of the great attractions for an outdoor eating location, so Main Street would be an ideal spot. Height is cool for outdoor dining. A rooftop or balcony eatery would be a great addition, as long as I don’t have to sit near the edge. (Wakeside is a balcony, but it’s not in Aberdeen.) I’ve been to many riverside urban outdoor eateries, and flowing water adds ambiance to any setting. A patio next to running water would make for a great summer night in Aberdeen. How long before Moccasin Creek gets flowing? // – Patrick Gallagher