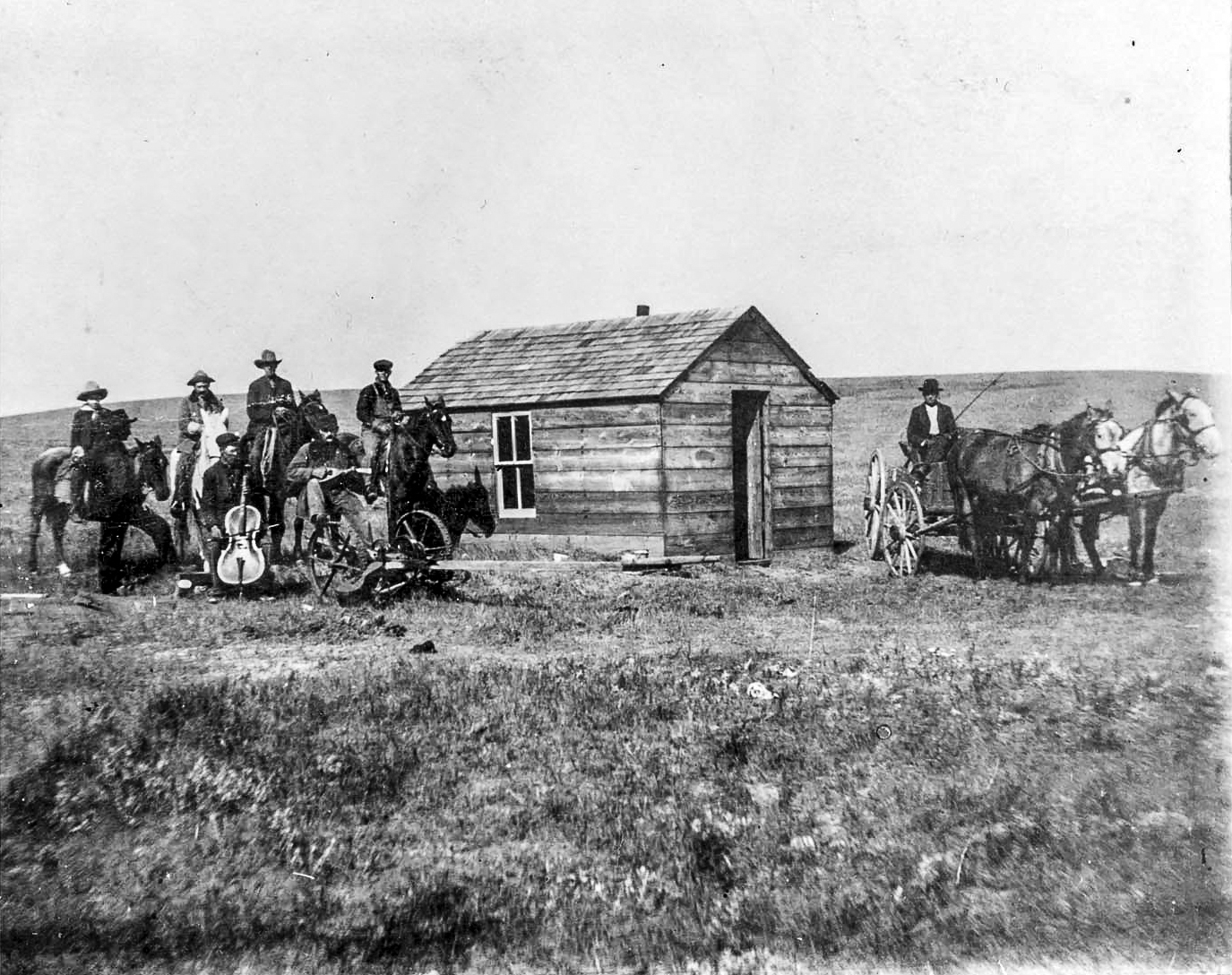 By the 1870s, the railroads were the cash cows of the country. They were transporting everything from coast to coast, and if they chose to come through your land, you would prosper immensely. The railroads moving west were everywhere, except through Dakota Territory, where Chief Drifting Goose had stopped the rail lines at the Minnesota border until 1880. 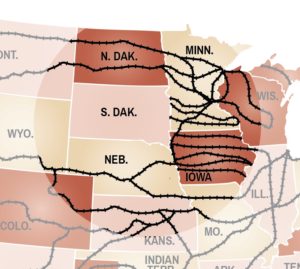 This map shows what Drifting Goose accomplished with his stance of peaceful resistance. He had stopped five rail lines from crossing into Dakota Territory from Minnesota and Iowa until 1880 while other areas were being developed to the west coast. Anticipation was high and the area was ripe for development. When Drifting Goose left, a mad rush began for settlers/speculators to stake land claims where they guessed rail lines would run. If they were right, they could become wealthy by developing a town site. If they guessed wrong, they would fade away. Map illustration by Stephanie Ludens.

Starting in 1879, homesteaders and entrepreneurs moved into eastern South Dakota, staking out claims on land they believed the railroads would want to come through. In our previous issue, we talked about the city of Columbia in Brown County, and how they had gambled on the railroad coming through their fair city, but eventually lost that bet. As a result, the city thrived for a short time, but then declined rapidly. In this issue, we’ll take a look at some of the other towns that sprang up within two years of Columbia, but also disappeared almost as quickly as they were founded.

Early entrepreneurs and investors knew that to entice a railroad through their site they needed a stable and reasonable path that would require the least amount of cash investment on the part of the railroad to build the track. They also had to convince people to settle in the new proposed railroad town site. Since the Pony Express had long ceased operating, all mail was now delivered by rail, so becoming an official post office site was seen as a big drawing card to get the railroad’s attention.

While the city of Columbia was springing up, the rest of Brown County was quickly being overrun with settlers. Towns were being platted by “sooners,” investors and entrepreneurs who claimed land before it was officially offered to claim, and by the railroad town site companies who were taking the same risk as the sooners. Some of these sooner towns were Yorkville, Rondell, Dodge, Winship, Gem, Foster, Bern, Nahon, Murray, Grand Crossing, Santa Clara, Savo, and Gage. Most of these were established as post offices in anticipation of bringing in the rail line.

In this story, we’ll focus on the fate of the sooner sites mentioned above. 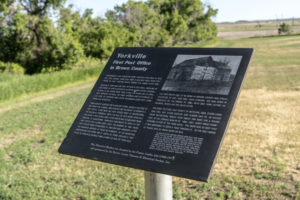 This plaque is located on Yorkville Road, on private property, where the road runs parallel with the Jim River. If Yorkville expected a railroad to come through, the cliff on which this site sits would have posed an engineering challenge for sure. Yorkville Road is northwest of Groton and does show up on Google Maps. Photo by Troy McQuillen

W.A. York actually arrived in the James River Valley about one year before Byron M. Smith from Minneapolis, who had established the city of Columbia in 1879 (see last issue). York built a log cabin in the spring of 1878 at a popular river ford in the same area as coordinates NE 30-124-61. He left that fall, and in April 1879, returned with his parents, wife, three children, Lester Blackmon, and Ed Harnoise. They brought with them enough supplies to build a grocery store and hotel wing, and received government approval to operate a post office on July 30, 1879.

The winter of 1880-1881 was brutal, and the area homesteaders took refuge in the York Hotel, surviving on venison and home-ground flour. The spring of 1881 brought in more settlers, and York’s ferry, operated on the James River, was in high demand. In 1881, when the trains arrived, York’s ferry business was all but done. Mr. York then left Yorkville and moved to Groton, sold out all his holdings, and moved to Devil’s Lake, North Dakota. On February 2, 1883, the Yorkville Post Office was closed. A year later, the Yorkville bridge was built over the James and the train no longer stopped there. It never became a town.

Rondell was first established as the Oakwood Trading Post in 1835 by Pierre LeBlanc. In 1838, Major Joseph Brown built a cabin here. It was occupied on and off many times prior to 1878 (see “Chief Drifting Goose” in the Jan/Feb 2018 issue of Aberdeen Magazine). In May 1878, the Henry Slack family, along with James Humphrey, came to this site, checked it out, and went back to Waubay where they met Francis Raundelle, a French trader who had occupied the site from 1839 until 1851, when he moved to Waubay with his Dakota wife.

In the winter of 1878, Humphrey and Slack returned to check on their claim and built a dugout, the first settler’s home to the area. During the spring of 1879, Humphrey also put up a log cabin, and by November had built a store and applied for a post office commission, naming the site Empire City. In April 1880, he received an official post office designation with the name changed to Rondell, an American spelling of Francis Raundelle’s last name.

Upon becoming an official post office, Humphrey built a huge general store that was two stories tall and offered everything from yard goods, groceries, and even farm equipment. This complex also featured a blacksmith shop and his family’s living quarters. On the second floor, church services were offered along with Sunday school, community dances, and even funeral services. Settlers in the area also came here to vote and hold various meetings. Despite all this, a town never grew here. The rail lines went to the north and to the south of Rondell. The post office was closed in November 1902, and the huge store was closed when the town of Stratford was established to the north. Rondell was located at SW 24-121-63.

Dodge was located at SE 20-122-61, and was set up as a post office in somebody’s home from June 1882 to September 1884. Not one piece of mail was ever delivered to this site. It was west of the current city of Groton, and never became a town.

Gem was another post office established west of Groton in February 1883, in the home of E.S. Nelson. In November 1896, his post office dissolved. He protested strongly, and after four years was granted the first rural route delivery system in Brown County on June 11, 1900. Noah Ashley was the mail carrier on this first-ever rural route delivery. Gem was located at SE 28-122-62.

J.H. Fletcher had homesteaded this property, located at SE 13-127-60, and was granted post office status in January 1885 in hopes of starting a community. A year later in 1886, both Hecla and Claremont were up-and-coming towns, leaving Santa Clara, near the Sand Hills, to fade into history. The post office was officially closed in 1896, but the actual postal service had stopped a few years earlier.

Daniel Wegner established a post office in his home in 1882, and operated it until November 1900, when the position was given to another fellow who had taken the Civil Service Examination. The post office was moved into a store that had recently been built at NE 14-128-63. A creamery built by the store, the Savo Finnish Creamery, became the first legally incorporated co-op in the area, and was patterned after co-ops operating in Finland. The University of South Dakota provided the co-op with their first butter maker.

It was not long before the butter made by this co-op was in high demand, as it won numerous superior awards at fairs. Soon this butter was trucked to nearby Frederick, SD, in tub barrels, where it was shipped all over the Midwest. The success of the creamery led to the creation of the Savo Farmers Telephone Company, organized as a co-op after the creamery model in November 1910. Despite the co-op’s success, a town never materialized. Soon rural mail delivery was available from Frederick, resulting in the closure of the Savo Post Office on September 15, 1915. The creamery closed by the end of 1915, and in 1918 the store also shut its doors.

Winship was a Chicago, Milwaukee, St. Paul, and Pacific Railroad station north of Frederick. It never became a post office. A schoolhouse was built here in 1889 in Osceola Township. Two grain elevators were also built, and a brief attempt was made to create a town in competition with Frederick. The highest population ever recorded for Winship was a mere eight. By the mid-1930s, Frederick had won the town battle. Winship was located at NW 11-128-64.

Grand Crossing was to be what Aberdeen is today. Located at NW 36-123-64, it was established in 1879 by the Rice Brothers from Watertown, who erected a store. They hauled materials from Watertown and built a two-story building with a store on the first floor, and living quarters for their families on the second floor. J.C. Pryor established present-day Aberdeen to the north of Grand Crossing in 1880. John Firey then bought this lone building from the Rice Brothers and moved it with horses to Aberdeen in 1882, where it became Lacey Drug.

Bern was located at 8-125-65 as a post office in a settler’s home, until mail service came to Westport.

A rail station planned for 10 miles north of Aberdeen, Gage was located at E 6-124-64. It had an elevator and tried to compete with Westport, but Westport won the battle.

Stay tuned for our next issue, where we’ll learn more about the towns in Brown County that DID prosper as a result of the railroad. // – Mike McCafferty 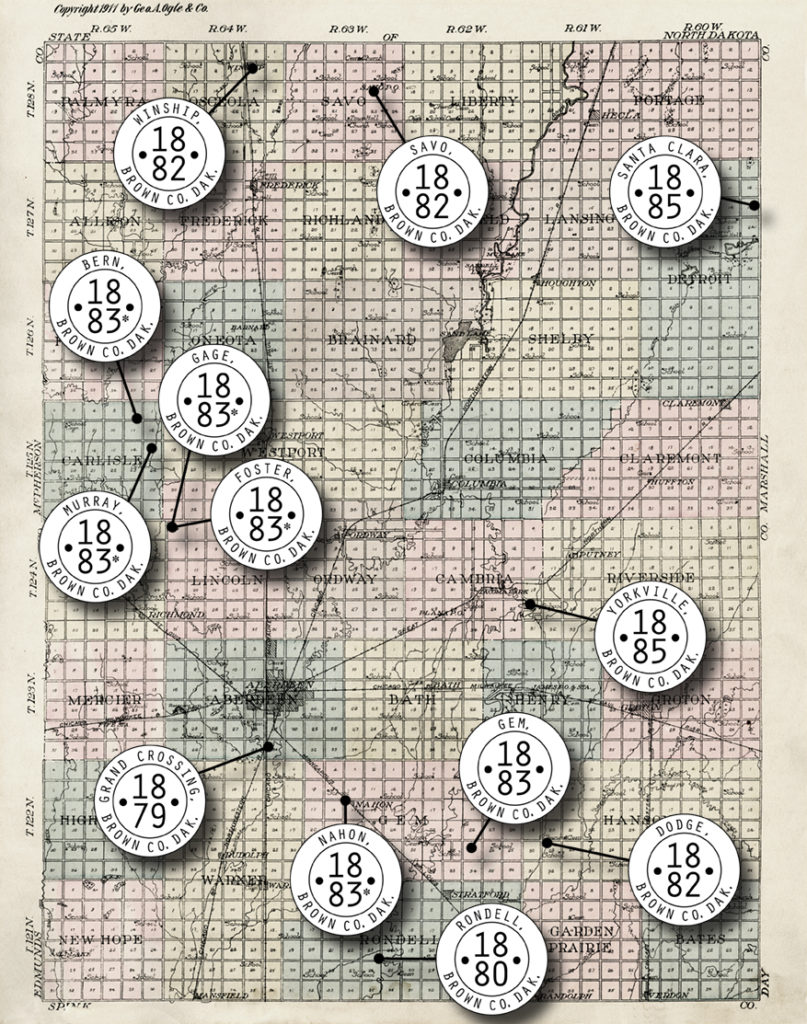 Note: The letter and number designations on the sites in this story relate to section-township-range numbers in Brown County. The letters show where a site was located within a specific section. For example, the site designation for Yorkville is stated as NE 30-124-61. This means it was at the northeast corner of section 30, in township 124, in range 61. The GIS Office in the Brown County Courthouse has Brown County section-township-range maps available for those interested in finding these sites.