People
Aiming For The Future
By Jenny Roth | September/October 2018 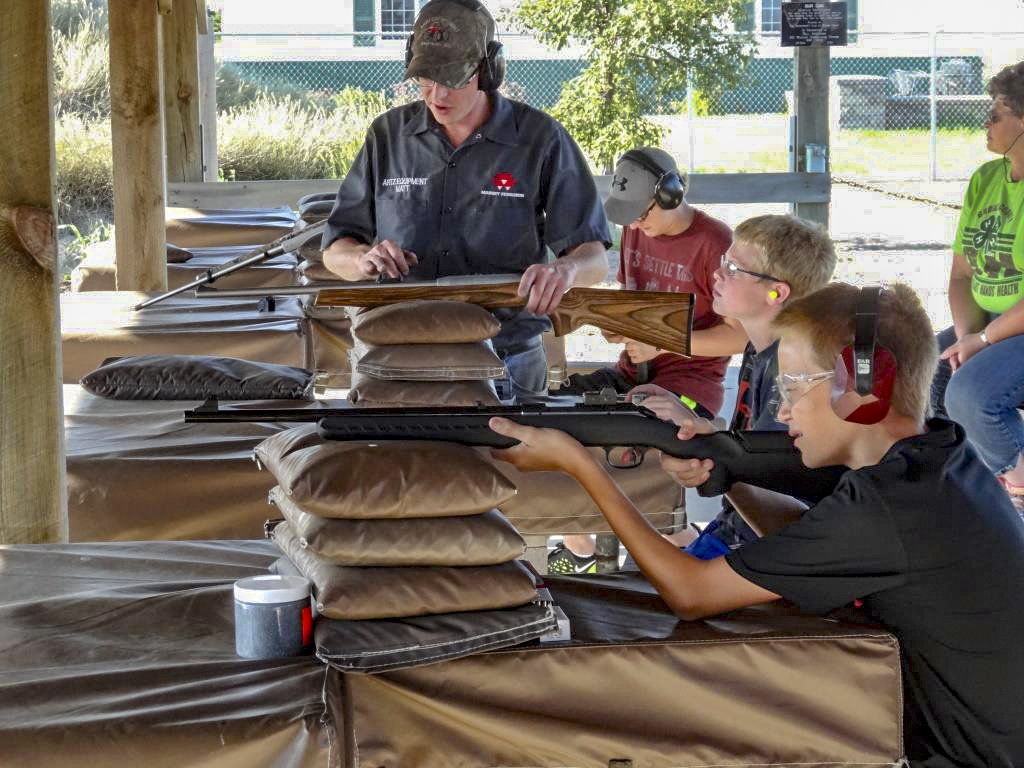 Arnie Goldade loved shooting sports and the South Dakota outdoors his whole life. Even before his father gave him his first gun at age eight, the Aberdeen native had already accompanied his family on the many hunting trips that they took together. Over the years he learned that if no one protects the outdoors, we could lose it. So he dedicated his time to preserving outdoor sports, and making sure others would have a chance to appreciate them too, by volunteering for various Aberdeen area conservation and wildlife organizations. One of these was the Great Plains Outdoorsmen (GPO), a nonprofit that raises money for programs within a 100-mile radius of Aberdeen that support outdoor activities and shooting sports, including those for youth, veterans, and women.

Before forming GPO in 2011, some members were on a committee for Friends of the National Rifle Association, but decided to branch out on their own so they could have complete control of the funds they raised and give them all back locally. Arnie served as the first chairman with GPO, but sadly lost his battle with cancer in 2016. Current GPO Chairman Scott Eisenbeisz says that Arnie got the ball rolling for GPO to be successful, and that the remaining 22 members of the group have worked to continue what he helped start. “We definitely didn’t want the group to disperse. We wanted to keep with it, and we’re going as strong now as we’ve ever been going.” This is true, and the proof is in the numbers. To date, GPO has donated well over $900,000 dollars in financial grants to local outdoor programs, facilities, and educational opportunities. This coming year, they’re looking forward to reaching and surpassing the $1 million mark in grant funds raised.

Starting in November, GPO members meet weekly to prepare for their annual fundraising banquet that takes place every February at the Ramkota Hotel in Aberdeen. One of the best-attended sportsmen events in the region, it brings in about 700 ticket holders. During their first meetings, GPO members decide which prizes will be given away, auctioned, or raffled during the banquet, and put together a catalog of these items. They choose high-quality merchandise prizes, including about 150 guns. After they have their prizes planned, members go out into the community and get help from businesses and individuals who donate to, or underwrite, each item. This way, they go into the banquet with everything paid for, and every dollar made that evening is profit to be donated. Scott says GPO emphasizes supporting local businesses, and encourages their grant recipients to purchase locally too. “We couldn’t do this without all the local businesses. They’re really the ones that make it possible for us to do what we do.”

The 2018 GPO banquet raised over $123,000 that was given out in about 40 separate grants, a significant increase from the $75,000 they made their first year. Once all the funds are in and they have a final dollar amount to work with, the next thing members do is read through all the applications for grants that they receive and determine how they can help. Finally, during an awards ceremony in May, they present checks to their grant recipients. They’ve donated to a wide variety of outdoor programs, including those who put on hunts for veterans, women’s shooting sports teams, and youth groups for fishing, shooting, hunting, and archery. The thing most of their grant recipients have in common is that they are all small organizations, and while they raise money for themselves, the grant they receive from GPO is needed to keep their programs going. Scott says for him the awards ceremony is one of his favorite parts of being a GPO member. “When we hand out the money in May to people and their kids who’ve tried hard to continue their programs, and we’re able to help them keep going, for me that’s the most memorable.” He adds that they also make it possible for some outdoor groups to get up and running.“This year we were able to give to high school trap shooting teams in Aberdeen and the surrounding area that are just in their first years, and really help them get a good start.”

In 2016, GPO won an ABBY Award for People’s Choice. Scott says receiving this award meant a lot to their group. “That was really a good moment for us. We’ve had nothing but support from the community as the years go on.” He adds that they’re always looking for more volunteers who’d like to join GPO. “We have young people, retired guys who have been in the outdoors for years, and people with all different types of careers. It’s really this mix that brings all the good ideas to the table.”

GPO members continue to put in the volunteer hours every year because of the benefits they see happening as a result of shooting sports and getting outside. Scott explains, “Kids growing up now have all this technology, but to be a well-rounded person we recognize the importance of getting outdoors too. The general numbers for a lot of sports are declining, kids just aren’t doing those things as much anymore. We’re trying to grow those numbers and help keep them involved.” // – Jenny Roth

The 2019 Great Plains Outdoorsmen banquet is scheduled to take place on February 7. For questions about the banquet, tickets, or joining the GPO committee, contact Scott Eisenbeisz at 605-380-5668, email greatplainsoutdoorsmen@gmail.com, or visit www.facebook.com/GPOSD.