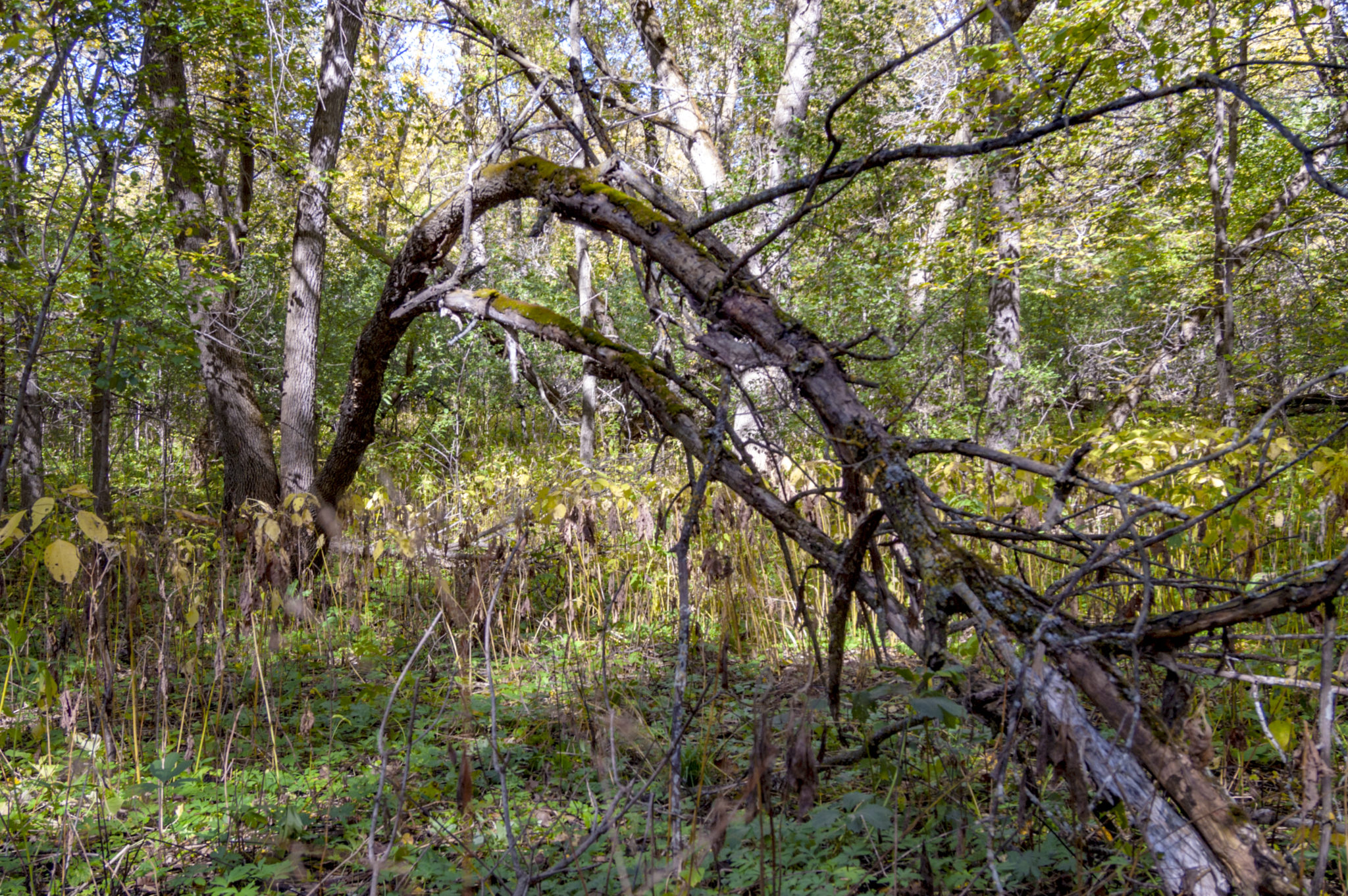 Located just northeast of Aberdeen, Sica Hollow State Park is full of both eerie stories and autumn colors, making it the perfect destination for a fall road trip

If I’m being honest, the first time I visited Sica Hollow State Park I was a little nervous. The park is about a two-hour car ride from my home west of Aberdeen, so the area isn’t part of my everyday stomping grounds, and a quick Internet search to find driving directions filled my screen with accounts of how the area was “haunted” and the scene for “the disappearance of several people in the 1970s.” Further online investigation brought up articles claiming “a Bigfoot-type” creature lives at the park, and that the streams “are red with the blood and flesh of ancestors.” Whoa.

Still, I’m not one to easily believe in ghost stories, so even after reading all this, I packed bug spray, a picnic lunch, and my three children into my vehicle and headed out to see Sica Hollow for myself.

Did we find blood-red water and hear strange noises on our visit? Actually, we did. But is it the stuff of Halloween legends? Or just Mother Nature at work? I’ve talked to people who argue for both ideas, but ever the realist I still vote for the latter, and after falling in love with the park’s beauty, continue to take my family back every year.

Creepy stories aside, if you’re looking for a road trip filled with brilliant fall colors that are close to home, Sica Hollow can’t be beat. For the best scenic route, I recommend forgetting the Interstate and instead taking US-281 north until it meets Highway 10. Go west on 10, through Britton and Lake City, and turn north again onto the gravel Sica Hollow Road. You’ll go around the park’s Dead Man’s Curve (more about that later) and wind your way to the day use entrance. You can hike on the park’s many horse trails, but the main foot trail is the Trail of the Spirits. At just over one mile in length, it’s an easy walk for all ages. The trail follows Roy Creek, and some of the springs that flow into it, while showcasing many of the 200 plant species that grow here. Since it’s in the low part of the hollow and under a canopy of trees (maples, oaks, ironwoods, elms, and basswoods, among others), the trail is always shady and cool. Once the leaves start to change for the season, it’s also ablaze with orange, red, and yellow hues. The Trail of the Spirits connects to other multi-use trails in the park that go up and out of the ravine and through prairie grasses for those who want a longer, more challenging route.

And just in case you want a closer look at the spooky, and the science, before you go check out this quick list that separates Sica Hollow myths from the truth.

Myth: People have mysteriously disappeared in the park.

Truth: Maybe, though none have been confirmed ghost attacks.

Websites like www.legendsofamerica.com and www.thesiouxempire.com claim that several people went missing in Sica Hollow during the 1970s, bringing fear “to a boiling point” that a strange creature inhabited the area woods, and causing a search party to investigate. After being unable to find any local news sources with information on missing people in Marshall or Roberts counties from the ‘70s, I decided to call the Sisseton Courier to see if they had any information.

The Courier’s Jennie Evenson grew up near Sica Hollow. She doesn’t remember any disappearances happening in the ‘70s, but says there are quicksand-like bogs in the area that could explain this fear. In the park’s very early days there wasn’t any fencing to keep people on the trails, and if someone went to the park at night and wandered too far and fell into one of these bogs, it could happen that they’d never make it out. “My grandpa owned land east of the park and lost cattle because they got into the bogs and sank in.” These days, there are marked trails and visible fencing on the park’s borders to keep visitors on solid ground.

Another explanation for the missing people reports could be the park’s steep drop offs and ravines. Sica Hollow is an unexpected hilly and wooded area surrounded otherwise by prairie and plains, a phenomenon caused by receding glaciers some 20,000 years ago. When you enter the park from Highway 10, you are essentially starting at the highest point and driving down to the lower part of the hollow. Here there are lookout points, like the one around the turn in the road known as Dead Man’s Curve, where you can park and look down into the tree-filled ravines. Some parts are so deep you can barely see the bottom, and according to Jennie, you can also see “stuff that has been left behind from homes that were there, and cars that have gone over the ravine that they’ve never been able to pull out.”

Myth: Inexplicable sights and sounds occur throughout the park.

Truth: There are some unique happenings at Sica Hollow, but they probably aren’t caused by anything supernatural.

In their book, The South Dakota Road Guide to Haunted Places, authors Chad Lewis and Terry Fisk describe how park officials also use the bogs to explain other strange occurrences at Sica Hollow. The book says, “Moans, groans, and screams heard in the forest are rationalized as sounds of trapped gases escaping from the muddy bogs.” Karen Borgen’s family has owned Canyon Ranch Trail Rides near Sica Hollow since the 1980s. Her husband Art was instrumental in the addition of horse trails to the park. She agrees that “springs in the area are bog-like, and that creates a methane gas that comes up and sometimes glows.” The water at the park can also have a reddish tint, but it’s caused by iron deposits, not blood. Signage along the Trail of the Spirits states, “It is believed that during the winter, air is trapped in the bog which borders the creek. As the snow melts and the ground thaws, the gradually released air makes a sound compared to that made when one blows air over the top of an uncapped bottle.”

Myth: A Bigfoot-type creature lives in the park.

Truth: I’ve never seen one, but there’s plenty of other wildlife in the forest.

While the stories I’d heard about an unusual creature living in Sica Hollow described it as being a large, strange bear or something that resembles Bigfoot, Jennie presented another common tale. “Years ago someone found two horse prints instead of four, and it started a rumor of a half-man, half-horse thing.” That’s pretty far-fetched for even the biggest mythical creature enthusiasts, but other animals have definitely passed through the park, including bobcats. “There are deer that live here, so it makes sense that bobcats would hunt here, “ Jennie says. As recently as within the last 10 years, locals have also identified an animal that resembles a small bear (though not confirmed as being a bear) on game cams, but I couldn’t find anything official to identify the animal. In general, if you visit the park in the daytime, you’ll mostly get to see birds and insects, as well as horses and their riders taking advantage of the horse trails. The woods are noisier at night as more nocturnal animals become active, and Jennie laughs, “When we wanted to be scared to death as kids, we’d go there at night. There’s lots of noises from all the living things in the woods.”

Myth: The park is haunted.

Truth: There is a lot of history and urban legends around Sica Hollow, which can set the scene for a good ghost story.

I’m not out to discredit anyone else’s experiences, or to say that claims of unexplainable drum beats, voices, or disappearing campfires are false. All I can say for sure is that I have never witnessed any of these things in all my trips to the park, but I’ll admit there is an allure of mystery that surrounds the place. “Sica” is said to literally mean “evil” or “bad.” There are a lot of Dakota narratives about the area, and before it was a state park, it was tribal land. Groups of families lived in Sica Hollow for a long time, though these families who did live here have all now either passed away or moved elsewhere.

One of the first settlers to live in Sica Hollow was a frenchman, Robert Roi, and he and members of his family are buried in the park’s Roy Cemetery, which is over 100 years old. This cemetery, along with another called St. Benedict Cemetery, are near the multi-use trail system at the park.

All of this combined with red bogs, deep ravines, and thick woods is the stuff scary folklore is made of, but to see if any of the myths are really true, you’ll have to experience Sica Hollow for yourself. // – Jenny Roth