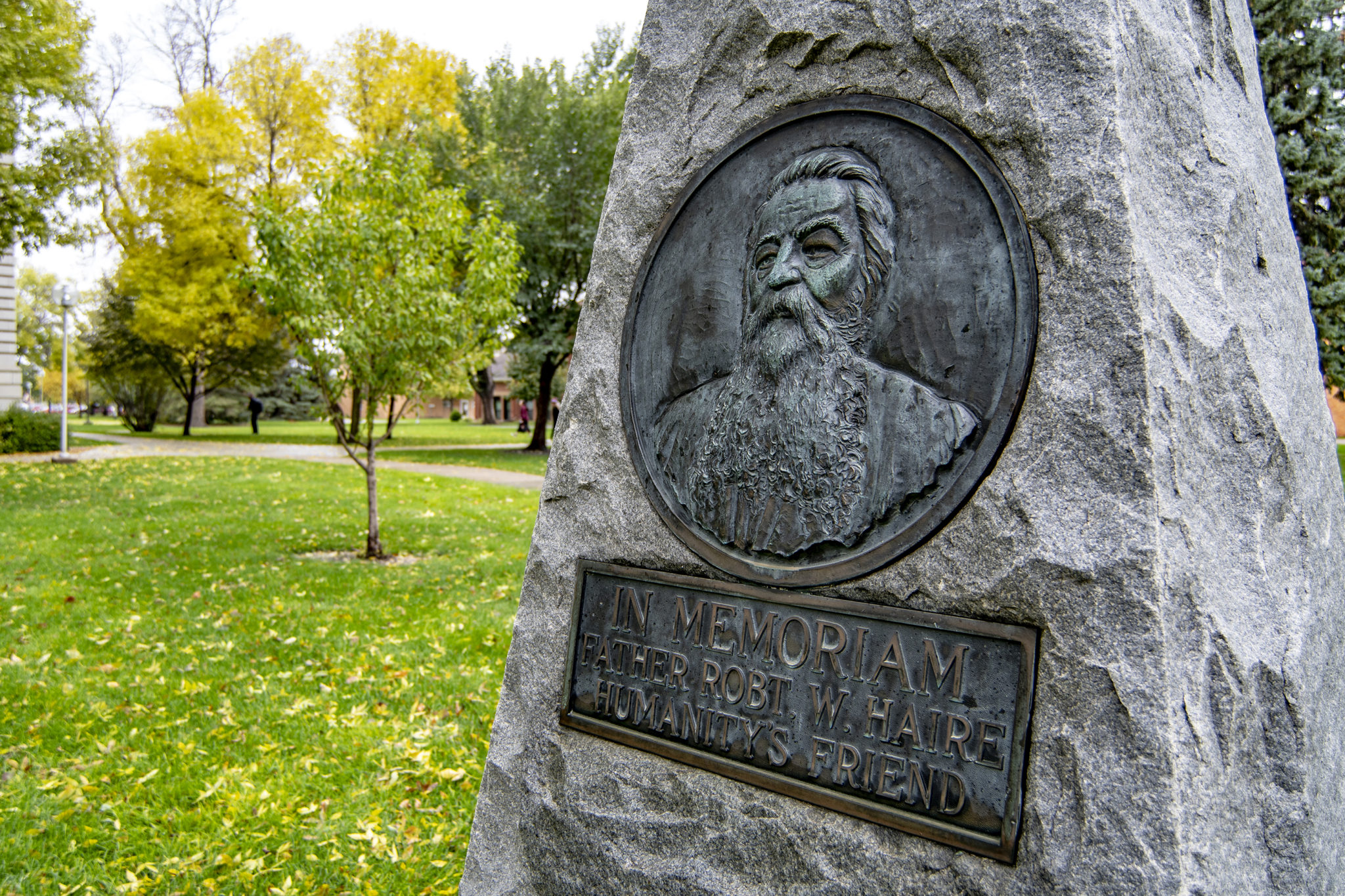 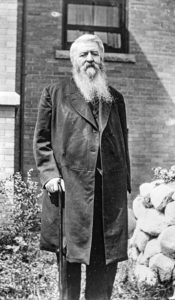 It’s fitting that the main speaker at the dedication of the monument for Father Robert Haire on what is now Northern State University was named Firey. As J.H. Firey proclaimed, Father Haire “belonged to that class of men who are given to see the wrongs in existing things, political and economical, and his love of justice and fair dealing impelled him to lend his aid in correcting these wrongs…. He was fearless in attacking what he considered evil… Like many of the great reformers, far ahead of his time; measures and policies that he stood for then are paramount issues now.”

Within a week of arriving in Dakota Territory, on July 4, 1880, the proud American Haire quickly violated the separation of church and state. In Watertown to prove his claim on land near Columbia, where he would build the first Catholic church in Brown County, he exercised his twin passions for faith and country. On Independence Day, the priest said mass in the Watertown courthouse and then went outside and delivered a stirring patriotic speech from the building’s steps.

Thirty-five years later and a year before he died, an Aberdeen paper printed a sort of pre-eulogy of Father Haire, the first Catholic priest in Aberdeen and founding pastor of Sacred Heart Church: “A quarter of a century ago, Father Haire was one of the best loved and best hated men in the community, this because he was a pathfinder.” A century and a quarter later, that path has had an impact on a city, a state, and a nation.

Born in Freedom, Michigan, in 1845, maybe it shouldn’t be surprising that he led the life he did. Raised by Irish Presbyterian parents, he converted to Catholicism after boarding with an Irish Catholic family while teaching school near Flint. After briefly practicing law, he entered the seminary and was ordained a priest in 1874. Eventually assigned to Flint, he soon led a group of pilgrims from among his parish to the promised land: Brown County, Dakota Territory. They arrived in Columbia on June 26, 1880. The next day, Father Haire said mass, the first recorded Christian service in Brown County.

Ever a booster for his adopted territory, Father Haire praised the “Jim River” area in a letter back to his Flint:

Everything [is] three times better than I expected it would be, and if anyone can raise five hundred dollars let him by all means come to DakotaÖ People talk about the cold and heat as extreme here. It is foolishness. [note: the date of the letter is July 5; heíd arrived 10 days earlier] Ö The air is delightful, as balmy as anyone could desire. The sun may burn you, but it does not boil you. The cold may bite you, but keep moving.

Interestingly, the letter also lays the groundwork for the radical way in which he would practice his faith: “…people are under the pressure of soulless corporations, but the good God has provided them with an earthly Eden to which to flee viz. the Valley of the Jim.”

Dakota Territory’s first bishop, Martin Marty, established a huge “parish” for Haire, which ran from the Missouri River to the Minnesota border and from roughly what became the North Dakota border to Huron. He made his way on foot, horse, buggy, and train and celebrated mass in a variety of venues, ultimately helping to create parishes and build churches.

Headquartered in Aberdeen, Father Haire temporarily lived in the Sherman House Hotel, sometimes attracting 150 people to his Sunday masses there. Before long, and after the collapse of his sod church in Columbia, he decided to build a church in Aberdeen. He dedicated the new Sacred Heart Church in late 1882.

Around the same time, the German-speaking Haire helped German Benedictine nuns establish a convent in Zell in 1883. He visited often to offer mass for the sisters and local farmers. According to a Benedictine history, “After the services, while partaking of his scanty breakfast, he used to separate the few coins of the collection into three piles, one for the sisters, one for himself, one for such as were poorer than himself.”

In 1886, Father Haire decided Aberdeen needed a Catholic school, and beginning a long friendship, he invited the Sisters of the Presentation of the Blessed Virgin Mary to come from Fargo. After opening one inside the church, sisters and priest soon sought to construct a freestanding school.

Father Haire recruited members of the local Knights of Labor group to help build the school. While the Knights was an organization of mostly Catholic immigrant laborers, the Church forbade membership in it at the time. Thus Father Haire was walking on thin ice, which could only have weakened as he took leadership roles in the state organization, including editing its newspaper.

As his politics were coming to the fore, so was the potential for conflict with his bishop. An advocate of temperance, Father Haire called for prohibition of alcoholic beverages, speaking around the state about it. While the bishop agreed in principle, he disagreed with his priest’s solution. The bishop might have been more irritated when Father Haire created Dakota’s first Catholic newspaper, the Dakota Catholic American, which inevitably became political. Bishop Marty stopped its publication after a few issues in 1888. Father Haire’s temperance stand, populism, support of women’s suffrage, and other causes couldn’t have pleased the bishop, but the priest was hardly finished. In 1888, he gave a lecture—somehow meant to benefit the construction of a local hospital—called “Reveille of the Revolution.” The Aberdeen News reported on the lecture. Father Haire “emphatically declar[ed] that the time had come when the laboring masses would have possession, and if this could not be secured in any other way a bloody rebellion would certainly be the result.” He also looked forward to a time when “the laws would be framed by the people themselves and not by a few pinheads and trading representatives of the Vanderbilt-Gould type.” The lecture foreshadowed a future direction.

The path cleared when in 1889 Bishop Marty reassigned Father Haire to Wakonda. Haire refused, and the bishop dismissed him, not a full decade after he’d brought the Church to northeastern South Dakota. Though he remained a priest, he was stripped of his ability to administer the sacraments.

By this time, in addition to the Knights of Labor, Father Haire had also become involved with the Dakota Farmers Alliance, a national political organization. He helped create its political wing, the Independent Party, later the Populist Party, which advocated political reforms including the initiative and referendum. Having introduced the concepts as early as the mid-1880s, Father Haire is credited as being one of the originators of the American initiative and referendum. He believed in allowing citizens to propose laws directly, due to his distrust of the “plutes,” the plutocrats, whom he criticized in an 1891 issue of the Dakota Ruralist newspaper: “These men make the laws to suit themselves—are a law to themselves. The people seldom get any law passed they want.” Adding: “Of course, the entire plutocracy, given over to fleecing the values that labor produces, are afraid of the people.”

In 1898, when South Dakota’s only Populist governor, Andrew Lee, was reelected, the initiative and referendum were on the state ballot and were supported by all political parties. The measure passed by a wide margin, and South Dakota became the first in the nation to approve them. These tools of direct democracy have been adopted across the country and widely used, prompting numerous statehouse efforts to rein them in, a revenge of the plutes Father Haire might not have foreseen.

In 1897, Gov. Lee had appointed Father Haire to the state Board of Regents, a group the governor suspected of undermining his plans. Even an ally like Father Haire created headaches, however. Despite his boss’s belief the state needed no more institutions of higher learning, the Aberdeen booster Haire believed the Hub City needed a college. After Lee vetoed an attempt to create a “normal school” here, he accepted later legislation for a technology school. Northern Normal and Industrial School opened in Aberdeen in 1901. The memorial to Father Haire on the campus of Northern State University reads: “In Memoriam – Father Robert W. Haire – Humanity’s Friend.” The rare recognition for a minister on a public campus was dedicated in 1924. One speaker at its dedication ceremonies said of the monument, “…standing as it does, in the very shadow of the buildings [Haire’s] imagination visualized years before they became a reality, it may bear witness to the young people of the possibility of accomplishment of a well-spent life.”

Disappointment with more mainstream political parties pushed Haire farther leftward. A newspaper reported on a speech in which he said, “Socialism was the only refuge [applause]…. He took occasion to announce himself as a socialist and his avowal was heartily applauded.” The father of the initiative and referendum also became one of the founders of the Socialist Party in South Dakota.

Nonetheless, Father Haire pursued a quieter path in Aberdeen. Or he did after he was a presidential elector for Socialist candidate Eugene Debs in 1900 and the 1902 Socialist nominee for the U.S. Senate. Otherwise, he kept a local focus as was noted in a posthumous tribute of the South Dakota Socialist Party: “During the earlier years of the organization, he seldom missed a meeting, always taking a leading part, but gradually teaching us to think and speak for ourselves. Later on, he would take no part unless we seemed to be drifting from Marxian principles when he would set us right.”

The Marxist missed the minister, however. When Bishop Thomas O’Gorman replaced Bishop Marty, he consented to Haire’s request for reinstatement. The bishop gave him his final assignment in 1902 to serve as chaplain to the Presentation Sisters and their new St. Luke’s Hospital in Aberdeen.

On March 4, 1916, his road came to an end. He celebrated mass then retired to his room, where he became ill. Reportedly he called for a Socialist comrade who was also a local Baptist minister, but he arrived after Haire had died.

Among many tributes, Mr. Firey’s memorial dedication noted, “To him, could most fitly be given Christ’s commendation when he said, ‘I was hungered and ye gave me meat; I was thirsty and ye gave me drink; I was a stranger and ye took me in…”

Socialist leader Eugene Debs may have agreed, as he seemed to best summarize the map of Haire’s life: “Father Haire was a true follower of the Judean Carpenter. He gave all he had, and best of all, HE GAVE HIMSELF to the poor … But he not only sympathized with the poor, he told them WHY they were poor and how they might put an end to their poverty.” // –Patrick Gallagher

We would like to extend a special thank you to Kathleen Daly of the Presentation Sisters Archive for providing photos of Father Haire for this story.