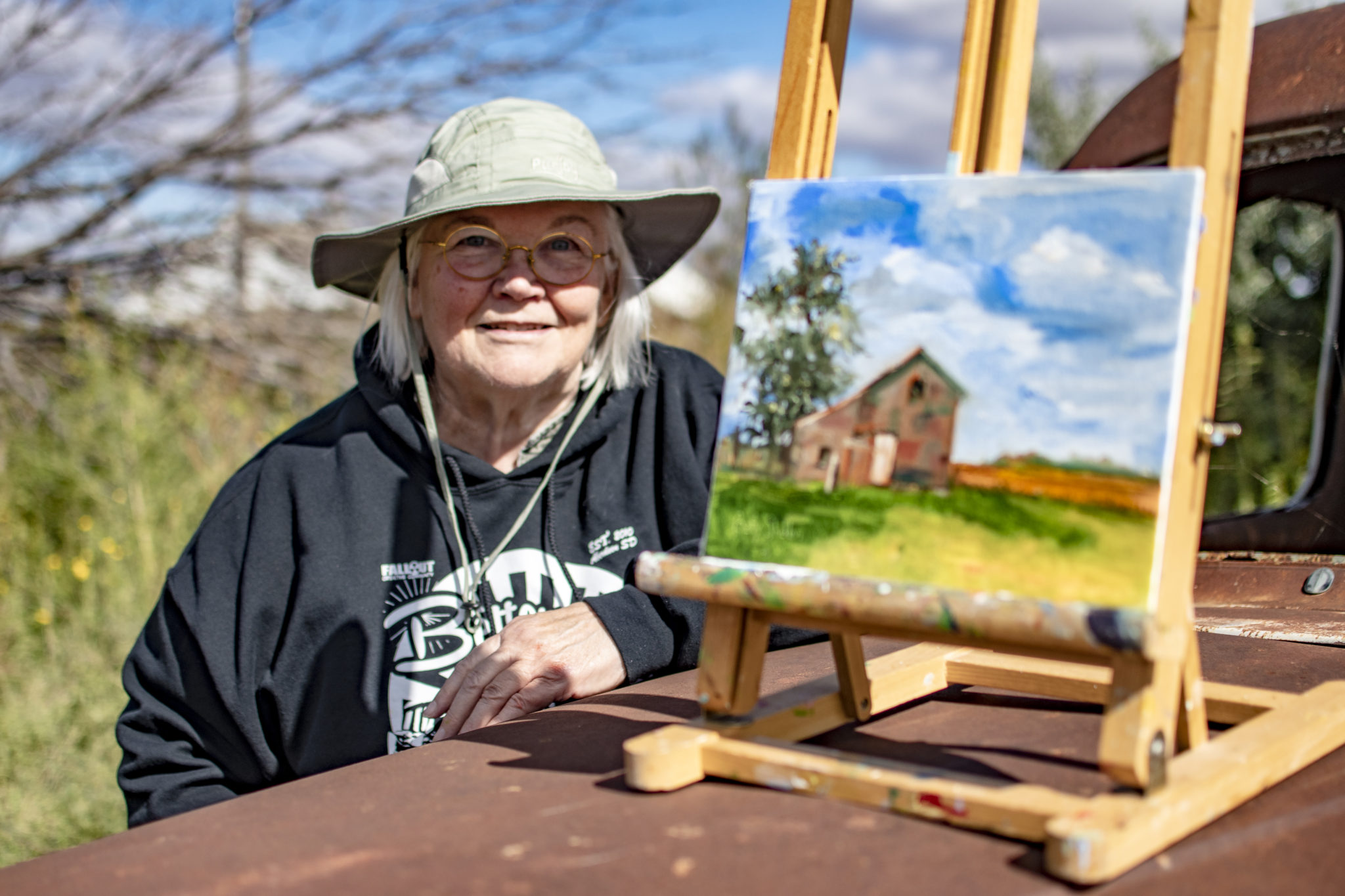 Among all the things that make up our busy lives, finding even an extra hour or two to spend on a creative passion can seem impossible. Local artist Betty Sheldon knows what this is like. She says she has always wanted to paint, but just couldn’t carve out the time to do so until she was in her 50s. Later in her retirement years, she found herself reorganizing her schedule and making a list of the things she wanted to do. Painting was at the top of that list. Since then, she has dedicated a good portion of her days to finding out what she can really do with her art. Her encouragement to others who want to do the same is straightforward. “Take whatever it is that catches your interest and just start.” She adds, “All of us struggle to find that time and give it a priority, it’s not easy, but in whatever kind of art you’re doing practice and repetition are very important. If you can do a little bit every day, that’s fabulous. Carry it with you. If you’re going to draw, keep a small pad and pencil in your car or purse or pocket and take it out while you’re waiting for an appointment or at a ball game.”

For Betty, a milestone in her journey as an artist happened on a train ride when she gathered the courage to paint in a very public place for the first time. While on an Amtrak to Washington, D.C., she opened her sketchbook in the vistadome car and started to sketch the scenes around her, onlookers watching and all. She continued to paint and sketch the sights during that trip, and has taken the practice of painting in the outdoors versus in the studio, called plein air painting, with her ever since.

Thanks to her traveling watercolor and oil kits, she has been able to capture many beautiful landscapes and “urban art” scenes. Remembering a time that she and her brother, who is also an artist, painted some old buildings in a small town shortly before they were torn down, she says, “One thing I love about plein air painting is that it puts me right back to where I was when I did that painting.” Another example of this is evident in one her paintings of Mina Lake where the waves lap at the shore and the trees all bend to one side. She looks back on that day as one of her more challenging moments of painting in the South Dakota outdoors. “The wind must’ve been blowing 40 mph. I worked so fast and had to literally hold everything down.”

Another reason Betty adores plein air painting is because of the people she has met while doing this form of art. She explains, “Painting on the streets or at a plein air event is almost like performance art, which I don’t enjoy particularly, but I do strongly feel that people, especially children, should see adults doing art.” Thinking of her own childhood, she doesn’t recall seeing grown-ups painting or drawing, and it didn’t occur to her that it was something she could take into her own adulthood. “I think it has an affect on a child, whether they want to do art or not, to know that it is something people do,” and she adds with a laugh, “and that you can do it in public!”

Betty has learned to paint mostly by practicing and from taking a few classes and workshops here and there. Along with watercolors and oils, she recently began making still lifes and portraits with pastels. Her work is available for commission and has appeared in numerous exhibits, but she says when she started out that running a business was never her intention. She encourages other artists who have plans to make a living with their art that doing so is possible. “If you’re in school studying different techniques and forms, it’s equally important to learn some business and entrepreneurship skills to compliment those.” It also helps to surround yourself with others who value creativity. A year ago, Betty formed a casual art group of about 25 people who get together, have a potluck, and share a project that they want to talk about. “Everyone seems to leave with new inspiration,” she says.

So what comes next for an artist who is growing in her own skills while also bolstering a creative community? According to Betty, she still has more to do. “I have a lot of aspirations, and I hope I can keep my energy up to do them. I was planning on living to 100, but people are living longer now, so I’m planning on 110.” // –Jenny Roth