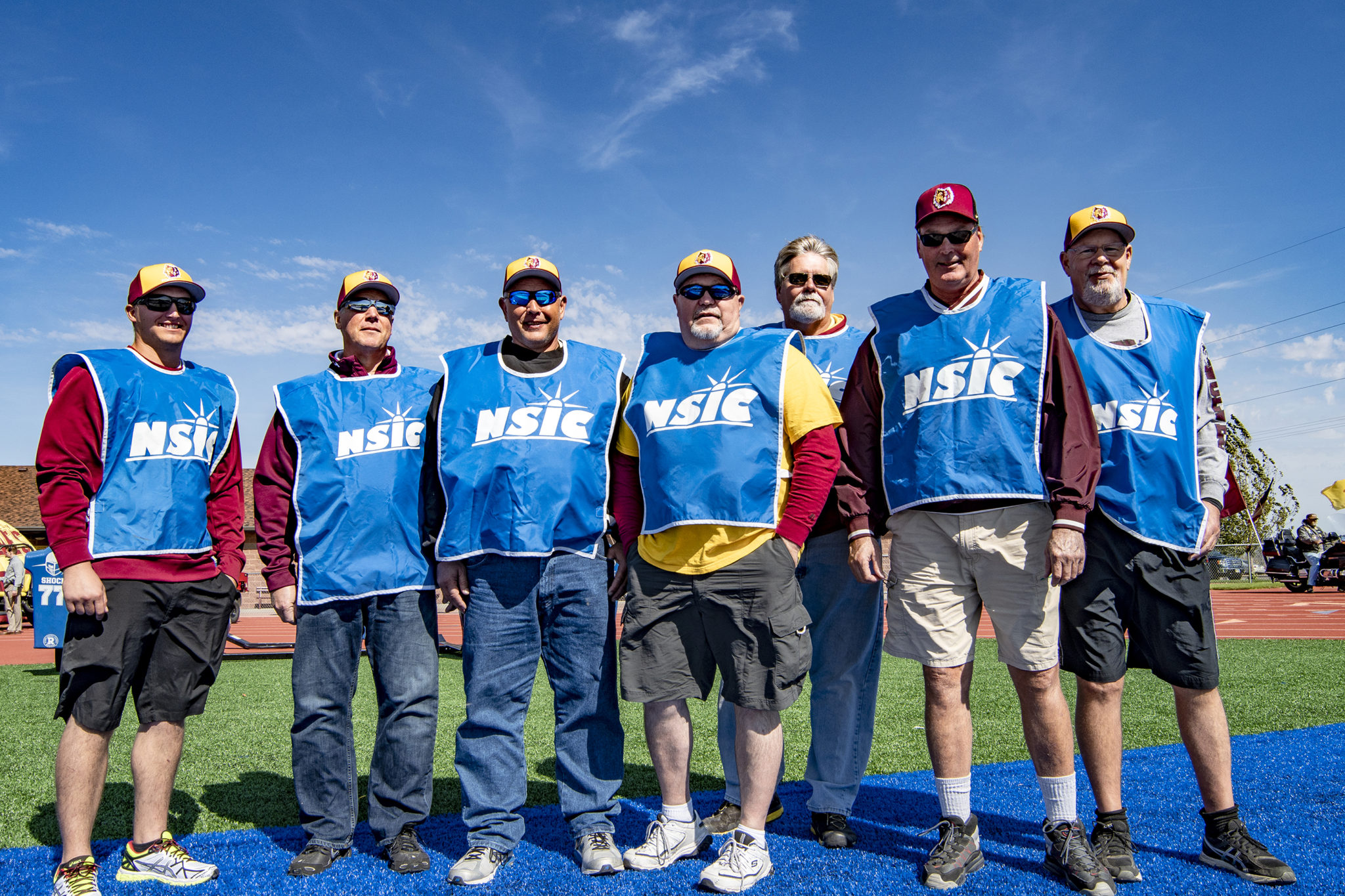 (They Don’t Make a Sound)

The unsung heroes of every football game are the most invisible people there: the chain gang. They track where the ball is on the field and where it needs to get for a first down. But you don’t notice them so much as what they hold. I tried to pay attention to them at some games, but my eyes kept going back to the field. As one gang member said, they’re supposed to be as inconspicuous as the referees (I laughed too).

At least five people run the chain gang. The “down” guy marks the spot of the ball for every play with a sign showing the current down. The chain team holds two sticks—one marking where the first down was for the current four downs, and the other, at the end of a ten-yard chain, marks the line to be gained for the next first down. The clip person attaches, well, a clip to the chain at a major yard line (one ending in 0 or 5), which helps the officials measure if a first down has been made as well as to put the chain back in the right place if the gang had to dodge an errant player. Finally, someone puts a target on the ground where the first down is, which is easier for everyone to see—plus it won’t move if the gang has to. The official crew typically works on the side of the field opposite the home team. Some chain gangs have a smaller unofficial crew on the other side.

The chain gangs for Aberdeen’s four football teams—Northern, Presentation, Central, and Roncalli—are made up basically of volunteers, maybe with a little compensation. It’s the same at all levels of the sport: home team fans doing it to watch their favorite team up close, not for big bucks. NSU deputy athletic director Zach Flakus says the compensation “is a NSU cap and game tickets.” In addition to the swag, there’s a little swagger too.

NSU chain gang go-to guy Keith Schumacher is a Northern graduate, as are several team members. When they’re on duty, “We wear the NSIC conference approved vest,” he says, “with our maroon and gold underneath.” Keith joined in the early 1980s. “Jim Coughlin had been on the NSU chain gang for years,” Keith says. “He kept inviting me to the gang’s pregame picnic and asked me to be a substitute. I did that a few times, then joined the next year.”

He’s still doing it because “I love football. There’s no better way to watch the game. It’s phenomenal to watch from that perspective.” His gang agrees: “We never have game days when we wake up not wanting to do it. There’s a lot of fun and camaraderie among our group.” They start the day with a tailgating picnic. “Jim Coughlin and Dennis Sahli started the pregame tailgater, which is always at someone’s home, not at the field. It’s always fun. Sometimes we have contests for the hottest sauce or horseradish, or we test varieties of brats.” Afterwards, they drive to the field together. “People see our camper pulling up and wave,” Keith says. “We have our own designated parking place.” Whatever celebrity they have, Keith and his gang do it to “return to the college what we got from the college.”

CHS and RHS have longstanding chain gangs too. In the mid-1980s, Ron Lyren’s neighbor was on Central’s chain gang. “They needed a sub one night, and he knew I’d do it,” Ron says. “I’ve been doing it pretty much ever since.” It took Brian Schumacher years to get the Roncalli gig. “It was always on the list of volunteer options for the Booster Club, and I always signed up, but there was never an opening,” he says. Then in 1999, Mark Gjernes was assembling a new chain gang, and he called Brian. About ten years later, Presentation asked Mark to do the same job for their new football program, so he called Brian again. There’s a lot of crossover with the Roncalli chain gang—maybe it’s a green and gold thing or a Catholic thing.

Ron says. “I’ve always been around the game. I enjoy being on the line of scrimmage.” He’s also appreciated watching friends of his two daughters who graduated from Central play. For Keith, another perk is “seeing local high school players playing for colleges, seeing them mature. We also saw some future pros, like Vikings Adam Thielen, who played for Mankato, and C.J. Ham, from Augustana.”

The chain gang isn’t all serious. “We get to know the officiating crews,” Keith says, “and we know who we can give grief to. Some you can, and some you don’t.” While the NSU gang teases officials now and then, the Roncalli group pranks each other. “Sometimes when our guy would get down to set the clip,” Brian says, “the chain guys would move the chain to aggravate him. After that, we couldn’t get somebody to sub for the clip guy.”

The elements add a challenge for guys who don’t usually get to do much running to keep warm. At old Swisher, Keith says, “Jim Coughlin and Dennis Sahli would build tents in the stands so their wives could be warm.” He remembers a Gypsy Day game that got called off because of lightning, “The rainwater was over the tops of our shoes, and we were holding metal sticks.” Brian remembers an early October Roncalli game with a 40 degree temperature and rain blowing horizontally in 30-40 mph winds. “Fortunately that game got mercy ruled at halftime,” he says.

One of the most unique memories belongs to Mark Gjernes. He was in Sisseton to watch his son play for Roncalli in 2006. The Sisseton chain gang was short one member, and they asked Mark if he would fill in. It had to be pretty unusual to work for the opponent—particularly in what turned out to be a blowout for the visitors.

The chain gangs may not run the field as much as players and referees, but they get their turn. Keith says the two-minute drill is always exciting as the offense is trying to score in a hurry, and as the down marker guy, he has to keep up. “Officials would tell me to hurry up and get to position, because when I’m set, the play can start,” he says, “and the rest of the chain gang could catch up.” He adds, chagrined, “I used to be faster.” That’s a familiar story. Ron passed the down marker to his son-in-law a few years ago after two knee replacements, and Mark’s knees made him give the job to Brian.

The basic job hasn’t changed much over the years, although Keith notes, “We used to be stationed right on the sideline, but now we’re a yard back. It’s safer for all concerned and also gives the refs room to run up and down the field.” They’ve also begun enforcing the rule that players and coaches have to be behind the chain gang. Before that change, Brian says, the Roncalli “sticks guys once tripped a coach. He got wrapped up in the chain while we were moving to the next position.”

There’s been talk about eliminating chain gangs in favor of something high tech and super-accurate, like laser or GPS. For now, though, the football gods think fans would miss the tradition and the drama of the chains coming out on the field after a fourth down conversion attempt, so no changes yet.

The chain gangs don’t change much, as Brian learned when he tried to get the job. Including the current group, Keith has worked only with about 11 guys over the 35 years he’s been doing it—an impressively small number for a team of seven and a testament to people who love what they’re doing. The NSU and CHS chain gangs each have over 100 years of combined service. Not many people would stay so long with a job no one knows they’re doing. // –Patrick Gallagher