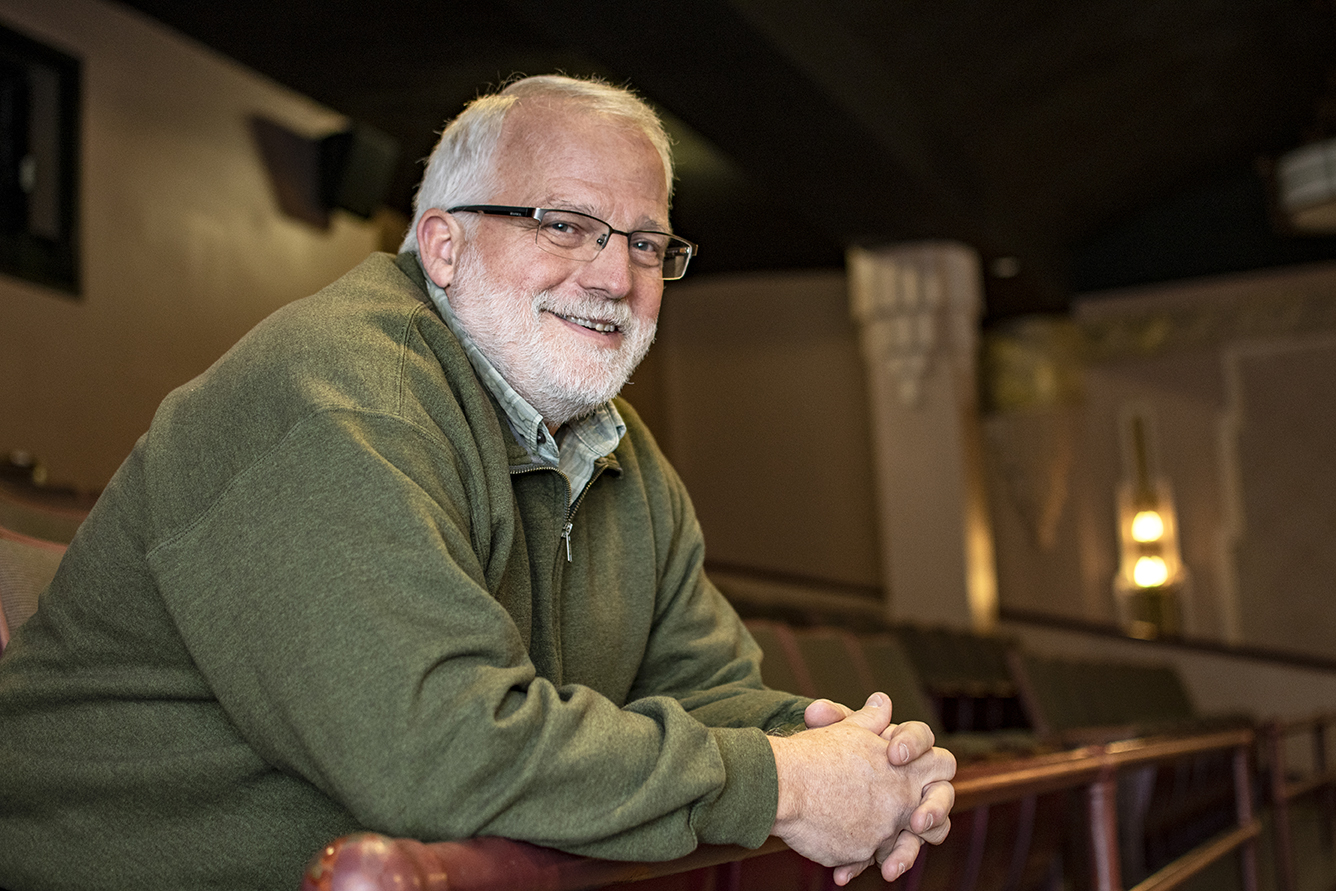 Jim Walker, The Founding Father of the Aberdeen Community Theatre

I’ve always been impressed with Jim Walker and the Aberdeen Community Theatre. I’m envious too, maybe because my theatrical career can be summarized in my high school director praising my memorization, which is kind of like praising a writer’s typing skills—essential, but unremarkable. Jim, however, has accomplished a lot with ACT, an organization he helped start in order to avoid mowing lawns, and has guided for going on 40 years.

Jim became interested in theatre at Aberdeen’s Sacred Heart School when a guest visited his second-grade class to do a program on singing, dancing, and acting. He can still do the routine he learned, but he won’t—it’s “completely politically incorrect,” which he tells me in his rapid-fire but well-modulated voice. His other youthful performances occurred when his class went to church every day, and he always sung loudly, “for which I took some grief,” he says. Music was what really got him interested in theatre, and he credits his Roncalli High School music instructor Benedictine Sister Joelle Joynt as well as drama teacher Presentation Sister Pam Donelan, who, he laughs, cast him as L’il Abner.

Jim did many productions at Northern and “finally declared a major in my first senior year,” he says, not surprisingly: “Theatre” (with nearly a minor in business). His college work study gig was backstage support for Stage One, a semi-professional company that performed at NSU in the summer. The group folded, but Jim still needed work. He didn’t want to mow campus lawns, so he convinced drama chair Dick Norquist to start a summer theatre program for both students and community actors. As he came to realize, “We didn’t know it at the time, but that was the beginning of Aberdeen Community Theatre”—all to avoid boring kinds of work study.

In fact, soon thereafter, Norquist and local newspaper critic Don Hall approached NSU President Joseph McFadden about organizing a community theatre company that would use the Johnson Fine Arts Center during the summer, when it wasn’t otherwise needed for college uses. McFadden approved, and the rest is history. Its founding father, Jim was with ACT before it was ACT.

Incorporated in 1979, the company did its first production, “Annie Get Your Gun,” in the summer of 1980. Jim was out of state for that show but returned to win the lead in the next, a British farce called “See How They Run.” The director thought it might help if Jim and the female lead had a little wine while rehearsing. Without spilling beans, Jim learned never to allow alcohol in rehearsal.

For many years, Jim did almost everything, directing, acting, backstage, design, technical, and more, all as a volunteer. Eventually he needed a break, however, so he decided to try out theatre in the Twin Cities. After a general audition at the Chanhassen Theatre, the casting director at the prestigious Guthrie Theatre called, and he got a part in “A Christmas Carol.”

But home beckoned, and he returned to ACT. Since it was still primarily a summer program, Jim had time during the rest of the year to pursue other opportunities. He directed productions around the area and acted both West River and in Western Europe, including on many U.S. military bases in Germany.

He also began to focus on building ACT as an organization, utilizing that near minor in business. After proving it could be sustainable, he convinced the board of directors to create a paid position—and he has been ACT’s artistic/managing director since 1985—sort of like work study all over again.

If creating work sounds like a theme, in the early 1980s, Jim got involved with the American Association of Community Theatres (AACT), both ACT in its one-act play competitions and himself as a volunteer. The one-act festivals were in the spring, so ACT needed to work on and present the plays to audiences when they didn’t have access to NSU stages. Jim found a solution: “We did ‘dinner theatre’ at the old Lumber Company. Patrons got a little entertainment with their meal, and we got a real audience.” It paid off. In its first year of participating, ACT won the state competition and went to the regionals in Topeka, Kansas. “We didn’t place,” Jim says, “but we received standing ovations and bravos, which was really gratifying coming from other theatre people. It was a great experience for ACT, and I learned a lot.” Ever since, ACT has participated in all the one-act competitions (which occur every other year). Along with ten state first place awards, they won the region contest with “Honk!” in 2007 to qualify for the national competition in North Carolina in which they placed third and were invited to take “Honk!” to the international competition in Japan the next year. In 2009, they took “How to Talk Minnesotan” to nationals. Jim has also served in numerous state, regional, and national AACT offices and committees, including as the current Vice-President for Festivals.

When ACT expanded beyond summer performances, Jim had to find locations around the city to stage them, such as the convention center. Before long, the group decided to take a run at getting the Capitol Theatre. In 1992, the owners, Narragang Holding Company, donated the theatre space, and ACT raised funds for renovations and to purchase additional space. In 1993, “Greater Tuna” was ACT’s first show at the Capitol.

Thus began an adventure in building management. Seating was an immediate need. To frustrate potential competitors, the Capitol’s previous movie theatre tenants had removed all the seats, so ACT borrowed chairs from other venues and even brought in hay bales for seating during performances. Eventually they installed new seating. They also widened and deepened the shallow old Vaudeville stage.

The lobby was another issue—there wasn’t one. With only room to walk from the ticket booth to the auditorium doors, the space wasn’t suited for intermission for 450 theatregoers. After acquiring space next door, Jim’s crew used sledgehammers to break through walls and start creating a real lobby. The fine tuning took several more years. Since the initial donation, ACT has tripled its space in the Capitol building.

Many community theatres repeat successful shows occasionally, but Jim has rarely done that in more than 150 productions. “Annie Get Your Gun,” ACT’s first-ever play, also highlighted its 25th anniversary year. Irked when the one-act version of “The Complete Works of William Shakespeare, Abridged” didn’t win the state festival—one of the few times he ever disagreed with the judges’ decision—Jim “remounted the play for the next festival. And it won.” The rules soon changed to prevent presenting the same play in consecutive contests.

After its birth as an alternative college work study job, ACT has always worked very closely with NSU theatre. It has also collaborated with Jim’s alma mater Roncalli and Central High School. In addition, it has added other programming, most notably, the Young People’s Theatre program, which annually has a show on the big stage and has produced many ACT actors, and Capitol Cinema, which brought film back to the old movie theatre.

Jim stresses that he’s been lucky to work with great volunteers. Dr. Warren Redmond, the current board president, started at ACT in 1986 and vouches for Jim’s management. “Jim spends wisely,” he says, “wiser than some community theatres. I believe we have the best community theatre in South Dakota, and we owe it to Jim’s financial planning and artistic talents.”

Jim’s talents and contributions have earned him the prestigious 2015 AACT Fellow Award, numerous outstanding achievement awards for directing and design, plus two Aberdeen Area Arts Council Friends of the Arts awards. He’s also served on local and state boards, including as chair of the South Dakota Arts Council.

Rory King has acted and served as legal counsel for ACT for many years after auditioning for “Man of LaMancha” in the early 1980s at the suggestion of his wife—who “maybe came to regret it”—because, he says, “Jim is so stimulating and fun to work with I would do it all the time if I could.”

Jim almost has done it all the time. But as ACT approaches its 40th anniversary, he has found a little balance. For the first couple decades of ACT, Jim maintained and improved the building, raised funds, took on roles in AACT, recruited and auditioned actors, and directed almost all the plays. Over time, he brought in talented staff and directors. Now, he directs the one-act play for each competition and one or two other productions a year. Obviously he loves the work, but sharing has given him “my only opportunity to get out of the building now and then.”

Dr. Redmond says, “Jim is truly a nice guy and if he were less so, he probably wouldn’t have accomplished as much as he has.” Jim has accomplished a lot, but what else should we expect from a guy who keeps creating work for himself? // –Patrick Gallagher