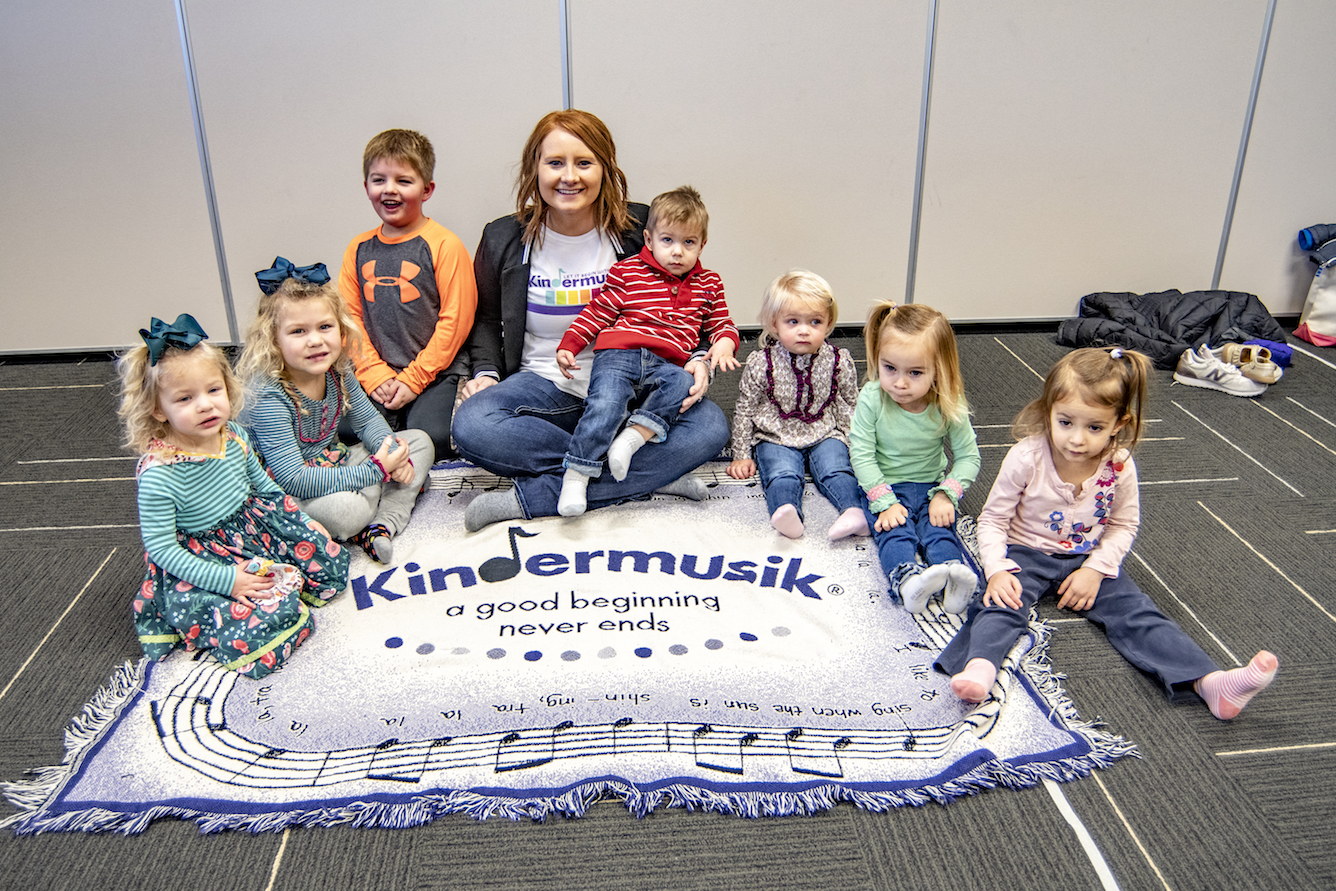 As a child enrolled in Kindermusik, Emily Sternhagen probably didn’t predict the classes she enjoyed so much would someday become her profession. But by following her interests, and the guidance from a mentor in the business, that is exactly what happened.

Music has always been a big part of Emily’s life. Growing up, the graduate of Groton High School took piano lessons and participated in choir and show choir. She now sings for weddings, funerals, and the Wednesday evening worship services at Bethlehem Lutheran Church. Her main gig these days, though, is owner of Kindermusik by Emily, LLC. Kindermusik is a worldwide, early childhood music education program that involves movement, instruments, and a lot of imagination and creative play. Teaching Kindermusik has been a dream come true for Emily because it allows her to combine her love of music with another one of her longtime passions: working with children. “When I was a junior in high school I did an internship program with the preschool, and since then I’ve always known I’ve wanted to be in the teaching field,” she says.

Prior to Emily taking over, Sonya Kempf owned Kindermusik in Aberdeen for about 35 years. When she began looking to move on to her next venture and putting her students into someone else’s hands, it was one of these former students that came to mind. Emily had taken Kindermusik classes, and later piano lessons, from Sonya until she was about 14. She was in her first year as an early childhood education student at SDSU when she got a call from Sonya asking her and her mother to go out to lunch. Sonya wanted to sell her Kindermusik business when her granddaughter graduated from the program in May 2016. As luck would have it, that also happened to be when Emily was set to graduate from college. Emily says she had already been contemplating returning to the Aberdeen area to be closer to family, and after talking with Sonya, she decided to move forward with that plan. “I began working with Sonya at Kindermusik and finished my degree at NSU.” Along with that, she also completed the requirements and exams necessary to earn her Kindermusik certifications.

Emily acknowledges that she did feel nervous when it came time to take over a longstanding community business.“I knew music and I knew teaching, but the administrative part was all new to me. I’m definitely learning a lot about that side of things.” She credits her upbringing on her family’s farm, where she still works four days a week, as her inspiration for being a business owner. “My grandpa founded our farm in 1943, and I watched my dad and uncle build it up to a third generation crop and cattle operation. I’ve learned a lot from watching them work hard to keep a business running.” Sonya also helped Emily with clients, training, and anything else that came up during her first year as a new owner. One of the most important components Emily had to figure out was a location for hosting her classes. She says the collaboration among people in Aberdeen has played a big part in solving that challenge. “Aberdeen is a small enough town that you can get to know people from a lot of different organizations. It’s amazing the connections that come up. A preschool teacher at Bethlehem Lutheran thought Kindermusik would be a good activity for her students, so she emailed me and that’s how I got started holding classes there. The community in Aberdeen is like that, just very accommodating and willing to work with business owners.”

There are about 50 students, ranging in age from 15 months to 8 years, enrolled in Kindermusik by Emily. From all her time spent teaching with Sonya, and now on her own, Emily has already gotten to see a large number of children enjoying the program. She says the classes build a solid foundation for any musical education the students will take later on. “The goal is to make it something the kids look forward to, and to give them a positive outlook for music. I always think how lucky I am to go into work everyday and watch these students grow and learn, and to see the joy music can bring.” // –Jenny Roth

For more information on Kindermusik by Emily, LLC, visit www.facebook.com/kindermusikbyemily.