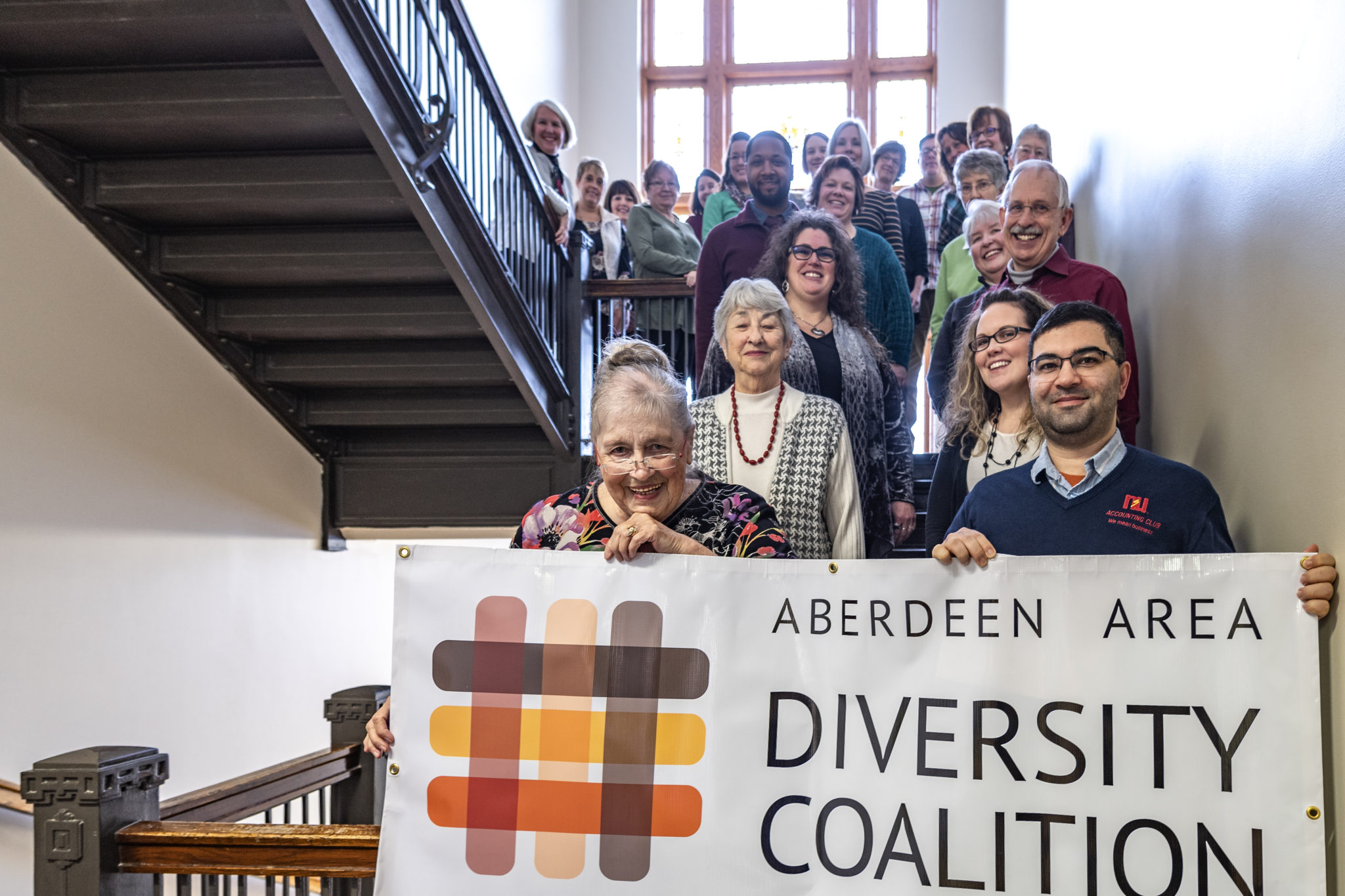 “Hi everyone, welcome! Gather in closer, we can fit more people in here.” Dr. Naomi Ludeman Smith, chair for the Aberdeen Area Diversity Coalition’s (AADC) board of directors, is ready to begin one of the nonprofit’s bimonthly meetings. There is laughter and chatter as the 20 or so present stakeholders shuffle their chairs together and squeeze in around a u-shaped table. It is warm and inviting in the room, with people from a variety of Aberdeen area organizations, backgrounds, and faiths seated side by side talking about all the regular things friends discuss, from restaurants in town to the impending snow. With notebooks out and coffee cups at the ready, the meeting officially begins with the introduction of new members and visitors, followed by an avid discussion around business both old and new.

The hour and a half flies by, and even though these meetings are important planning sessions for the volunteer group, it is what they do outside of this conference room at the Aberdeen Recreation and Cultural Center that means the most. A coalition is defined as an alliance for combined action, with action being the key word. “We chose the name Aberdeen Area Diversity Coalition versus Diversity Committee because we really are a task-oriented group. Our purpose is to come together and do things,” Naomi explains.

Since forming in 2016, the organization has done just that by completing at least 35 documented accomplishments and countless other acts of service. They’ve tackled language barriers by distributing information on ESL opportunities, publishing Ride Line brochures and applications in Somali, Karen, and Spanish, and connecting translators to those in need of their help. They’ve also provided education about refugees and immigrants by bringing a number of exhibits, documentaries, book studies, and authors to Aberdeen, and also by speaking at local businesses. At their most recent meet and greet, people were able to visit with their Somali neighbors while sampling traditional Somali foods. AADC vice-chair Sheila Richards says the event far exceeded their expectations. “We had hoped for 200-300 people to be there, and 454 showed up.” About the impact of these meet and greets, she adds, “When you sit and eat together with somebody you learn to really know that person, and your eyes are opened.”

All of the things the coalition has done over the last couple of years have been with their ten-year goal in mind: that Aberdeen will be known as a place that welcomes all people, whether they come from another part of South Dakota, or another country in the world. Of this aspiration, Naomi says, “We have a lot more work to do to get there.” But her voice doesn’t sound doubtful nor discouraged at the thought. Rather, the stakeholders are motivated by everything they have learned since forming their nonprofit, and they’re keeping their sleeves rolled up as they dive in to what comes next.

One such future plan in the works is the AADC’s collaboration with the Aberdeen Community Theatre. The two are hoping to bring a performance group from the Minneapolis-based Pillsbury House and Theatre to perform Breaking the Ice, an interactive, customized production that aims to start dialogue about the challenges around diversity. To make this a reality, the AADC is raising funds for the troupe to visit Aberdeen for five performances. Naomi says, “What we’d like to do is follow these shows with a five-part series of directed conversations open to anyone who wants to talk about challenging topics, like Islam, race, and change.”

Fear of or prejudice against Islam has come to the front of discussions on diversity in Aberdeen as refugees and immigrants from predominantly Muslim countries settle here. Instead of being reactive to other events, the AADC wants to continue putting their energy into serving refugees and immigrants and providing experiences, educational opportunities, and conversations that are the foundations for cross-cultural relationships. AADC stakeholder Wende Lewis explains further, “Immigrants and refugees are here. If we don’t help them, they’ll just stay marginalized and cost us more time, more money, more everything. But if we welcome them and teach them what it is to be an American and learn from the things they’ve gone through, it brings all of us forward- economically forward and forward in our sense of security in the way that if you understand someone, you feel more comfortable around them.”

While they strive to be a source of education in the community, AADC stakeholders emphasize that they don’t have all the answers but are constantly learning themselves. When the group first formed, they were focused primarily on identifying new refugees and immigrants in the Aberdeen area, most of which were of Somali, Karen, and Hispanic descent, and how they could connect them with the services they needed for day-to-day living. By concentrating so much on this mission, they were looking at diversity primarily as something that exists among different races or cultures. They’ve since realized that we’re all diverse in some way and are now expanding their reach. Shelia says, “It’s not the idea of white people setting themselves up to say to someone else, ‘You are diverse.’ We’re all diverse, and we’re all in this together.”

Layton Cooper moved to Aberdeen, his wife’s hometown, about two years ago and works at NSU as a diversity coordinator. He explains what he has learned so far as a stakeholder and board member who regularly attends AADC meetings. “When I initially thought of diversity, I almost automatically went to ethnicity and race, but my role at NSU has challenged me to think of diversity on many different lines. It can be things like the ways in which an individual was raised, sexual orientation, or whether they are a first-generation college student in their family. It’s been an enlightening experience for me, and I’m glad to be a part of it.” Gordon Tree Top represents the Aberdeen School’s American Indian Parent Advisory Committee, one of the newest stakeholders to join the AADC. He says his adult life is dedicated to helping Native American kids reconnect with who they are, and he echoes Layton in that joining the AADC has given him more resources to learn both about diversity and himself. When I ask the group if they have any tips for how we can approach people in our communities who are outside our normal circles, he says, “If you see someone and you don’t understand them, ask them. If you don’t know your neighbor, go visit them. It’s really that simple, but it is uncomfortable at first. Since I’ve been coming here (to AADC meetings) though, I’ve found that I’ve been throwing myself more and more into these situations even when it is uncomfortable.”

One event that has helped to shape the personal growth and understanding of diversity for AADC members was bushCONN, and the preceding AberdeenCONNECTIONS. The AADC made local headlines in 2018 when it was announced that they received a $20,000 grant from the Bush Foundation, the host of bushCONN, to send 25 Aberdeen area professionals representing 22 local organizations to the day-long networking event. Naomi says before heading to Minneapolis to meet with other leaders from the tri-state area at bushCONN, Aberdeen participants did some of their own cross-cultural skills training. “The idea behind it was to answer the question: How do we become more comfortable talking to people who are different than us- not just different cultures or ethnic groups- but everyone who is distinctly different than us?” To do this, each AberdeenCONNECTIONS member took an inter-cultural diversity assessment that showed them where they were in their cross-cultural skills and mindset. Afterward, with the help of one-on-one coaching, they made a plan for how they could get to where they wanted to be in those skills and practiced putting action steps into place before bushCONN.

Iona Hjoda is an AADC stakeholder, board member, and director of international admissions at NSU. She sheds more light onto the value of each person in the coalition bringing their unique perspectives and knowledge to the group so they can work better together. “There is so much learning happening here. I am the person who can tell you things about what would make someone leave their family behind and move to another country. But I’m also the person who reads a lot about statistics and the history of immigration in the U.S. because I want to know more about that area of expertise. Everyone in this group is building on what they know and sharing what they know, and I think that’s really powerful.” Liesl Hovel, development director with Lutheran Social Services, says she is part of the AADC because of her role at LSS, but also because she wants to be. She describes how she gets goosebumps thinking of their large turnout at the Somali meet and greet and talks about how far the AADC as a group of volunteers has come in just a few short years. “We’re a work in progress, and we want to keep going and branching out. We’re learning together.” // –Jenny Roth