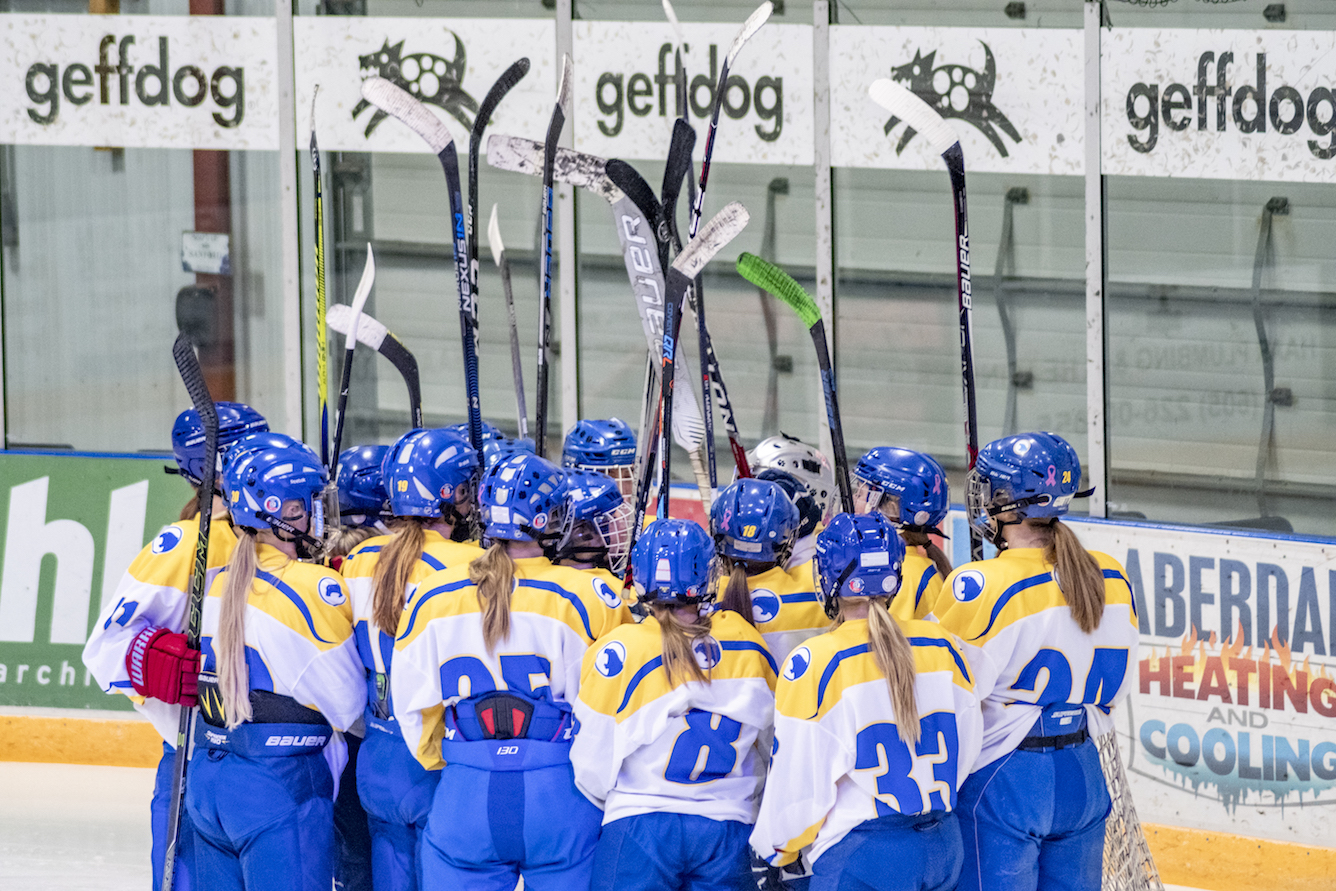 I’m at the Odde Ice Arena with my three young daughters, tying what seems like a never-ending length of shoelace on a small skate, while simultaneously searching underneath a bench for a missing glove. There are a lot of parents around me doing the same thing. We’re all here for our kids’ ice skating lessons. As we start to leave the lobby for the ice, the door from the locker rooms opens and a troop of hockey players on their way to practice passes us by. They’re covered in helmets and pads, but my seven-year-old sees a long ponytail hanging down the back of one of their jerseys, and she can’t help but blurt out, “Those are girl hockey players!” It could be my imagination, but I think she skates with a little more speed and liveliness in her step after that.

Seeing a female hockey player may have been unexpected for my daughter, but girls hockey is not exactly new in Aberdeen. In fact, this is the 20th season of competition for the Lady Cougars. The team has had plenty of success stories over the past two decades, the most recent being their four year consecutive sweep at the state tournament, and their respectable third place finish at the first-ever USA Girls Hockey Nationals Tournament last year. Winning teams have a tendency to attract more players to their sport, and as for Aberdeen’s numbers, the Cougars have one of the biggest girls hockey programs in South Dakota. Head Coach Shelby Edwards says, “The numbers might be a little smaller than I’d like them to be, but in comparison to the rest of the state I have to realize how lucky we are.”

Coach Edwards leads the varsity and junior varsity girls teams with the help of her assistant coach Madie Brink, a sports management student at Presentation College. This is her third season with the Cougars, and her second as head coach. Before coming to Aberdeen, she played hockey for the Rushmore Thunder in high school, and later for an ACHA team while attending SDSU. Her prior coaching experience includes an assistant coach role with the Lady Brookings Rangers and her position as the first women’s hockey coach at Midland University in Fremont, Nebraska. From her standpoint as both a former player and now a coach, she says girls hockey is definitely growing both in Aberdeen and statewide. South Dakota recently added a U14 league for competitors under 14 years of age. The addition of this league has made it possible for Aberdeen to reach younger players and put together a girls U14 team for the first time this season.

The three seniors on the Lady Cougar varsity team, Taylor Maurer, Emma Ahlberg, and Hailey Holland, have been playing hockey together since middle school. Before that, they played on boys teams. When asked about their goals for their final high school season, they do bring up the obvious possibility on everyone’s mind of a five-peat. Winning the state championship this year would tie the Cougars with Sioux Falls for the record of most consecutive state titles. But they only talk about the idea briefly before jumping into what else they hope to accomplish. Taylor says, “We mostly want to make our last season fun for everyone on the team and just help the younger girls improve. That way when the older girls move on, they still have a team.” Emma agrees. “It’s sad knowing it’s our last year, but fun being the leaders and having the younger girls look up to you.” Hailey adds that for her, the best part of playing hockey is the friendships that have been made over the years. She describes the team’s family-like atmosphere, “We have traditions we do together every year like a Cougar sleepover and singing songs to get ready for games.”

The younger girls and coaches agree with the upperclassmen that the Cougars have a strong team-centered mentality. Coach Edwards says, “Out of all the teams I’ve coached they have one of the strongest bonds that I’ve seen. They have to be together in the rink, but they choose to spend time together outside of hockey-related things too. I think that helps build upon a lot of the success they’re able to have.” Sydney Hofer is an active 8th grader who plays defense on the Cougar varsity lineup. Hockey is her sport. She’s been on the ice since she was five years old and plays almost year-round, spending her summers with the South Dakota Stingers. She’ll tell you without missing a beat how much fun hockey is and how she hopes to play at the college level someday, with her eyes set on Minnesota’s Bemidji State. About her team, she says, “We play music and burst out singing in the locker room before games and go out to eat together after games. We’re like a family. I love my teammates and just really love the game.”

Guarding the net for the Lady Cougars is goalie Shelby Snow, a junior at Aberdeen Central. When she moved to Aberdeen from Sioux Falls in 4th grade she was in search of a sport or activity that she could get involved in. She found hockey. “When I started out I really wasn’t a skater, and no one else raised their hand for the goalie position, so they put me there and it’s been a good fit.” Her focus is straightforward. “Guard the net, don’t let any goals in, and get as many shutouts as I can.” Since she is the goalie, she might not be able to mentor all of her younger teammates in their positions on the ice, but she can do another important thing. “Be friends with them and make them feel welcome so they want to keep playing hockey and have a positive outlook. If they came to practice and nobody thought to talk to them or include them, then they wouldn’t succeed very well.”

The Lady Cougars acknowledge there is some pressure that comes with a winning record in trying to maintain that momentum. Shelby says, “Having a good team, there’s a lot of weight on you because if you lose everyone’s really disappointed and sad. But that’s the point of hockey. You win some, you lose some. It’s not supposed to be all wins all the time, it’s supposed to be challenging too.” To combat any nerves, the team’s philosophy is pretty simple: practice. Being a Cougar takes a commitment of practicing four days a week along with playing games almost every weekend from October through March, many of which require travel to at least eight other towns. Coach Edwards says she doesn’t have any trouble with her team putting in the effort it takes to be successful.“These girls are hardworking, they all want to be at practice. Some of them we have to shoo away from the rink when they’re sick and convince them to go home and rest, but that’s a good problem to have.”

Consistently working hard, and adding in a pregame warmup of singing in the locker room, seems to be a solid strategy that is keeping the Lady Cougars a force to be reckoned with on the ice. // –Jenny Roth