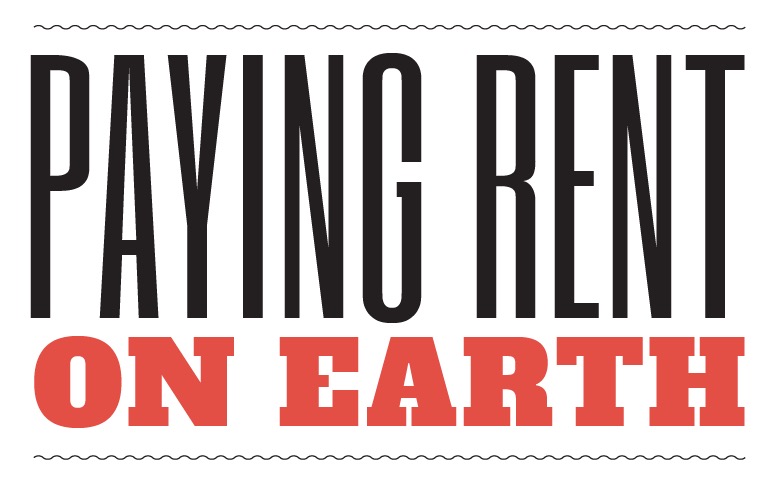 Community Champions Awards recognize those who are generous in giving their time to serve Aberdeen.

“It’s your rent on earth,” Glenna Fouberg says, quoting the late Presentation College Vice President Don Balvin. She was talking about the community service she and others had done to earn Community Champions Awards from the Aberdeen Area Chamber of Commerce. The awards, which have been around for more than 40 years, will be presented on February 12 at the Best Western Ramkota Hotel.

Dozens of Aberdonians have earned Community Champions Awards, which acknowledge contributions in business, athletics, military service, and other areas. Two of the oldest awards are my focus here. Since 1974, the George Award, according to its guidelines, has honored an individual (usually a man) “who has worked tirelessly on behalf of the community in trying to make Aberdeen a better place to live and work.” The awardee takes the initiative, rather than “just letting George do it.” The Woman of Spirit Award (previously the Athena Award) started in 1988 to recognize a woman who “exemplifies the following characteristics: wise, organized, mentor to others, achiever, nurturing, selfless, purposeful, inspirational, respectful, has integrity, and is a team player.”

Some honorees are well known, such as Mary Groth, Peg Lamont, Clark Swisher, and Ken Fiedler. Some are transplants to the area, including Dr. Lorraine Hale (originally from Australia), Stacy Levsen and Kelly Weaver (Salem), Guy Trenhaile (Redfield), and Abe Pred (Nebraska). Some have won multiple times. Vi Stoia won the George Award in 1979 and 1993. While the George has mostly gone to men, Helen Miller won it in 1983, before the Woman of Spirit Award started, which she then won in 2002. The other women who won the George shared it with their husbands: Lowell and Eleanor Nall in 1994, and Rod and Glenna Fouberg in 1998. Glenna also won the Woman of Spirit Award in 2014. One other couple can claim both awards: Joe (George in 2001) and Cindy (Woman of Spirit in 2007) Senger.

I spoke with the Foubergs and Sengers about serving the community. All four were very involved when they were young. Cindy says, “We were both pretty active in high school, when you were involved in everything.” Joe adds, “So participation came pretty naturally. We even did Christmas caroling.” (Cindy says she just tagged along and mouthed the words.) 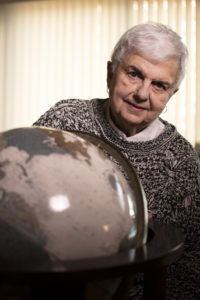 “We both came from small towns and farms,” Rod says. “Being involved is what you saw growing up.” Glenna agrees, “Both of our dads were very involved in the community. I think we learned from watching them.” Rod adds, “It was also formative for us to be involved in 4-H clubs, Jaycees, and Jaycettes. Those things help develop interest in the community and leadership skills.”

All four also began their careers elsewhere. Before retiring from his posts as CEO and Chair of Dacotah Bank, Rod worked at the Sioux City Stockyards. Glenna taught school in Alaska, Sisseton, Bristol, and Webster before coming to Aberdeen, where she ultimately headed up the Alternative Learning Center. Joe started as a teacher, then switched to banking. He became president of U.S. Bank in Aberdeen in 1992, then moved to Dacotah Bank a decade later, where he is now CEO. Cindy started her nursing career in Eureka and Watertown. She later got involved in nursing education at PC, and then nursing administration at Avera St. Luke’s. 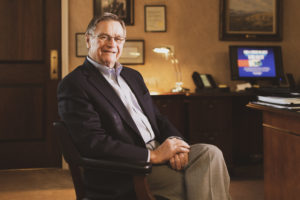 Both couples came to Aberdeen in the 1970s. When they got here, Rod notes, they found “many role models, like Vi Stoia, who encouraged young people like us to get involved.” And get involved they did. The two couples’ resumes would use up all my space here and would catalog most of Aberdeen’s major accomplishments in the past 30-40 years. Briefly, they’ve served on boards, led fundraising, or otherwise worked with the Northeast Regional Health Center, Avera St. Luke’s, Presentation College, Homes Are Possible, Inc., the Central High School building project, the Aberdeen Development Corporation, Junior Achievement, United Way, Northern Foundation, Roncalli Foundation, and more. They’ve also been active in their churches and in their children’s activities.

The educator, Glenna focused a lot of her attention—although hardly all—in activities supporting education. Besides the list above, she served on the State Board of Education. A nurse by training, Cindy focused on health care. “I wanted to make things better for patients and the people I led. I thought if you have happy staff, you’ll deliver better care for patients.” Joe remembers answering the phone and hearing the caller say, “‘This is Governor Bill Janklow.’ I didn’t believe it, but the governor was calling to ask Cindy to join the State Board of Nursing.”

Bankers Joe and Rod have been involved in a wide range of community activities. As Rod explains, “In banking, there’s a certain encouragement to be active in the community, to make it a better place to live. After all, vital communities are important to all businesses.” Joe says, “I’ve helped with almost all the major capital campaigns in town, and I think of all the good those have done in the community.” 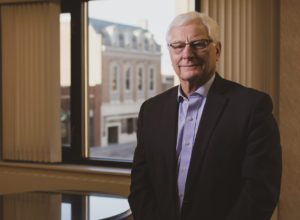 Rod has been particularly gratified by his involvement with the Presentation Sisters, whose mission Vi Stoia got him involved with. “It was easy to respond to the Sisters’ requests and ideas,” he says. “The Sisters’ quiet leadership, that quiet caring for the community, rubs off. They’ve quietly made a huge difference, and it’s been so rewarding to be a part of.”

They encourage people to get involved. “Take advantage of it,” Joe says. “You discover what there is to do, and you can grow personally.” Rod adds, “When you give the time, you get it back. There are all sorts of benefits—working with other folks for the benefit of others.” “It’s a choice to be involved,” Glenna notes, putting it plainly. “People need to get involved in the community for the community to thrive. It’s not going to happen if they don’t.” 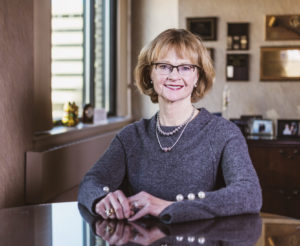 Rod agrees, “Dacotah Bank has a culture of community involvement,” and it shows. While Joe earned his award just before coming to Dacotah Bank, the Bank has two other George winners in addition to Rod: Paul McDonald in 2011, and Rob Fouberg in 2012—the latter must have learned something from his parents’ role modeling, just as they had when they were young.

These couples did much more than raise a lot of money for Aberdeen organizations, because it takes more than just money to make a community worth living in. The Community Champions Awards recognize that too in the variety of contributions they honor. And as these couples will tell you, it’s not about awards. Cindy notes, “A lot of who I am today is from the personal development that came from what I was involved in.” Glenna enjoys “seeing that you’ve accomplished something to make life in Aberdeen better.” Rod speaks for all four when he adds, “We’ve never done anything on our own. We’ve always worked with others. It’s rewarding to see the results of cooperative efforts.” “It’s fulfilling,” Joe says. “There are self-rewards.”

“Reward” was a word Joe, Cindy, Rod, and Glenna used often when talking about the community work they’ve done—rewards in personal growth and community benefits. They may all have felt an obligation to “pay their rent on earth,” but their investments are paying great dividends for Aberdeen. Even as they encourage new generations to take their turns, they’re not finished. When asked if she has learned to say, “No,” Glenna speaks for the group, “I’m still working on it.” // –Patrick Gallagher