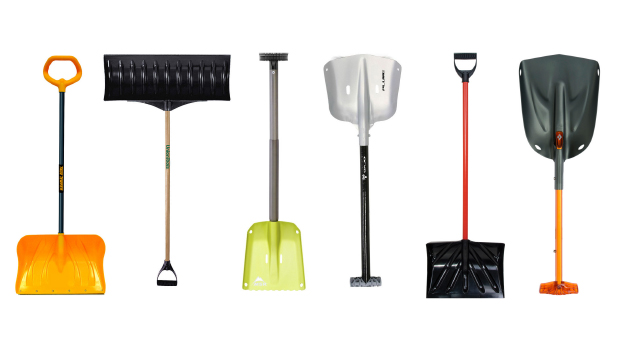 Fighting the snow on your driveway is not for the faint of heart. It’s a battle out there, so make sure you choose the right tool

Like most people (maybe I’m wrong here), I’m not a big fan of shoveling snow. Age has, however, given me some tolerance even for this—mostly—because it has to get done, so I want to do it as well and as quickly—and painlessly—as possible (quickly and painlessly are hard to pull off at the same time). So it’s off to our various hardware and box stores for a tool check.*

*The publisher told me to do this story, like he was looking for reviews: like Iím his personal shovel shopper or shomething.

Fortunately, commercial Aberdeen provides many weapons for shoveling snow—or “moving snow” as I’ve heard some people call it. I thought this was just a euphemistic way to convince themselves it wasn’t as much work as “shoveling” sounded, but given the nature—or nomenclature—of some of the tools, that might be appropriate.

What to buy—the shovel or the pusher? Some tools designed for removing snow call themselves either or both of these names, sometimes both on the same label. Experts say to push snow, which may explain the identity crisis (or marketing genius?). But there seem to be some differences.

Pushers usually have a smaller and wider concave blade. Shovels tend to be longer, narrower, and flatter. With one, well, you push snow—you know, like a girly man, or something. With the other, you kind of stab at it and jerk up, showing your dominance as you cast it aside like dust—your back be damned (likely). Shovels are manly. Pushers are, well, not. (Ah, but I kid! Please note: this is meant to be humorous. I mean no offense to the pushers or their users.)

I suppose those schizophrenic implements of destruction can be pushers if it’s a light snow and you’re lucky enough to have a sidewalk with no cracks, upheavals, or uneven seams that will disrupt your progress (sending shockwaves through your body) and you can push snow all the way into the street or onto your neighbor’s sidewalks (but that would be wrong).

Most of the time, I find, snow here requires a shovel: push for a foot or so, depending on snow depth and moisture content—i.e., weight—and heave it somewhere. Because of this, I wonder why I’m intrigued by the scoop shovel, which is basically a coal shovel. Why does this appeal to me? Needing one means lots of snow. But you gotta admit, it’s a pretty manly tool.

As I mentioned, pushers tend to be wider. Some are so wide, they come with wheels—maybe for people who want the feel of a snow blower but don’t want to spend the money. Some wheels are small and attached to the blade; some come with bigger wheels and an axle as though the shovel is an attachment to make a golf push cart functional year-round. I’ve seen a “dual angle” pusher with wheels. It’s really only a single angle, about 60 degrees, with two identical blades joined at the center to push the snow to each side (I guess the marketers thought “dual angle” tested better than “dual blade”). It looks like an old train engine’s cow catcher.

There are also ergonomic shovels (like I need a reminder I’m old and out of shape). There are some varieties. The most common seems to be the zig zag shaft (it looks like my back sometimes feels the next day), while some have a second handle sticking up from the middle of the shaft like a mutation. The strange shapes don’t hang neatly in my garage. Generally, the point of these shovels seems to be that they bend so you don’t have to (note to self: trademark that phrase).

Shovels generally come in two kinds of material. Which is better—steel vs. plastic? Which would you rather be? Man of steel or—the other? Steel is certainly more durable and probably more effective, but it’s heavier. Experts suggest using plastic blades with a steel edge—it’s lighter and reduces wear. The metal also helps you get at the stickier, icier snow at the bottom. Plus, the neighbors can hear that you’re out there scraping at your sidewalk at 6 a.m., while they’re still in bed (unless it’s the other way around; in which case, they should knock it off).

Some snowfalls only require the light touch of a broom (and just why such peaceful, beautiful snow needs to be disturbed from its place of gentle repose is beyond me—but it’s not beyond my wife). Basically, it’s a question of the push broom vs. the old-fashioned corn broom. The push broom seems like it’s going to operate like a pusher, always moving forward, but in reality, it’s a piston-like operation, a continuous cycle of two feet forward and 18 inches back to catch the snow left behind—and there’s always some left behind. The corn broom requires a lateral side-to-side metronomic motion. Your forward progress will be slower, but you’ll end up with an aerobically clean sidewalk.

I’ve only recently noticed the leaf blower as an option. It’s less work than a broom, I guess, but mine is electric, and it’s bad enough to string extension cords around in the summer. Then there’s the king of them all: the snow blower. A neighbor lent me one once, and I did eventually figure out the analytic geometry—the clockwise/counterclockwise turning of the machine and simultaneous spinning of the chute so that the snow doesn’t (usually) hit me in the face. I want one, but I know I’d always wait for a safe time when I wouldn’t wake neighbors and would hardly use it (so manly).

Actually, maybe the king is the bobcat, the small skid-steer that will do a sidewalk lickety-split. I didn’t see these in the shovel aisle of the box store, but I did see the shirttail cousin the bobcat won’t claim—the riding lawnmower with snow attachments (come on, just add a zero to that purchase!). This heavy machinery calls to mind plows I can hear from my house at 3 a.m., chirping downtown as they seem to move snow only by going in reverse.

I’ve also seen that there are robot snow shovels, designed to do your sidewalk like those robot vacuum cleaners do your living room. Now that sounds cool! My only hesitation is that I hear they’re made by Cyberdyne Systems, and I have visions of a lightning bolt on my sidewalk followed by a naked weightlifter, and I don’t think it will be snow he’s coming back for.

There’s also the neighbor kid, but you can’t buy them at the box store either.

The best snow mover of all is, of course, the sun. If only the city would let us just stay inside and wait ’til spring. // –Patrick Gallagher

As part of my research, I objectively checked out some reviews of shovels and shoveling (so you don’t have to).

Popular Mechanics: “Try a shovel before you buy it. Wear the gloves you’ll use outside and dry-shovel, making the same motions you would to clear snow.” Really? Dry-shovel in public? In the middle of Runnings? You first.