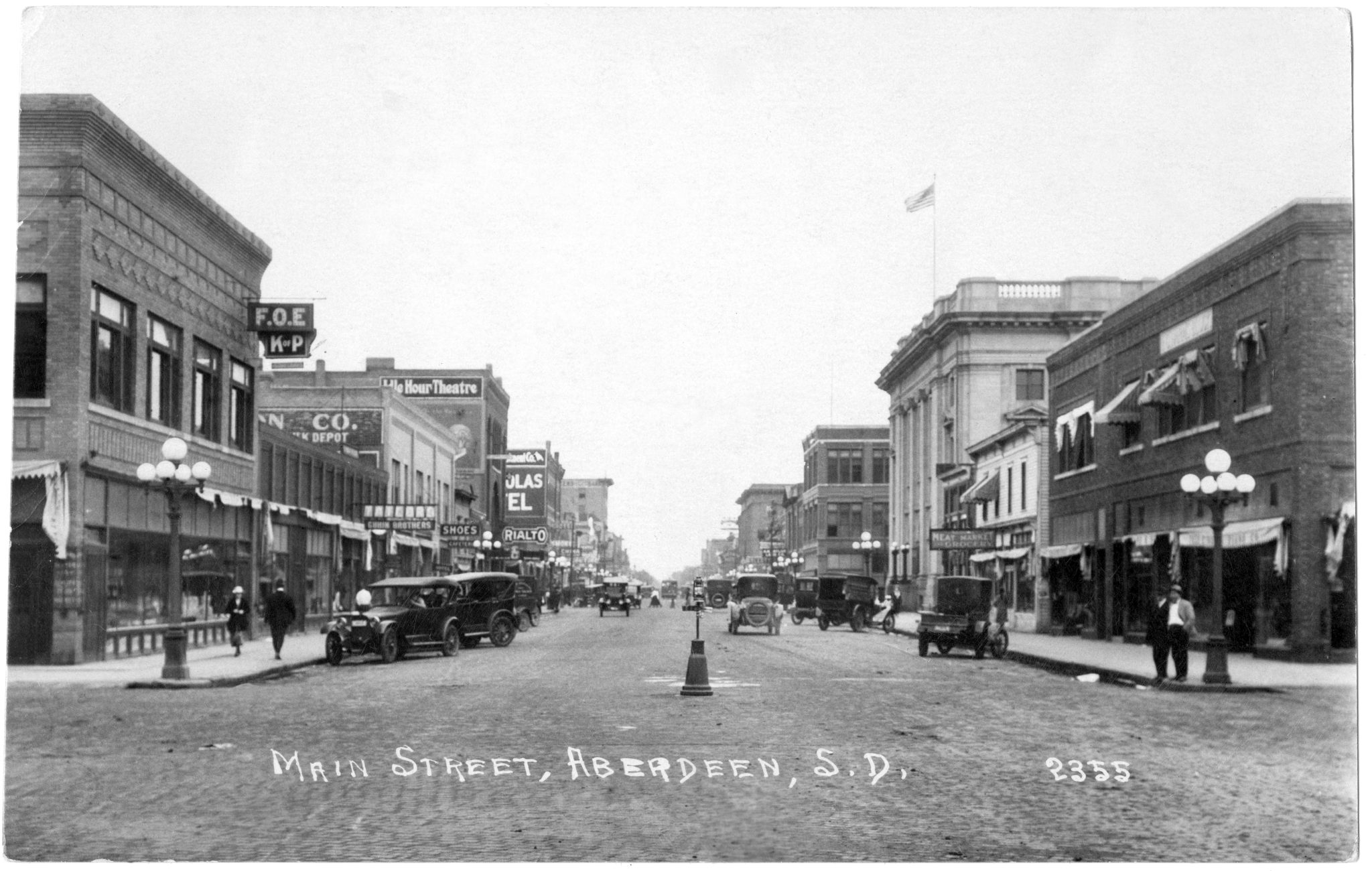 Could a nickname be the secret to Aberdeen’s early fame?

For the last decade, Aberdeen has been using the advertising slogan Write your Story in Aberdeen. It’s meant to entice folks to come here and make memories or add another chapter to their life story. It encourages locals to make their mark on the city and live the life they desire. It symbolizes opportunity. Aberdeen also has a nickname. For nearly the entire history of our community, the term “Hub City” has been synonymous with Aberdeen. Yet newcomers to this town might not know why entities like Hub City Radio, Hub City Roofing, or Hub City Moms include Hub City in their names. Hub City is not to be confused with a marketing slogan, nor is it part of an advertising campaign. It is a qualitative nickname, like the Big Apple, or the Windy City, that puts a perception in your mind. It is a nickname that packed a lot of punch over 130 years ago.

Here’s a little Marketing 101. Most people have probably heard of branding. Brand guru Seth Godin describes a brand this way, “A brand is the set of expectations, memories, stories, and relationships that, taken together, account for a consumer’s decision to choose one product or service over another.” Or, one city over another.

A brand can be a promise to the consumer to know what to expect. And a slogan or a nickname will define or enhance a brand position – substantially helping that business stand apart. Everyone will forever remember Nike’s Just Do It, McDonald’s I’m Lovin’ It, and Save Big Money At Menards. All these slogans (along with incessant advertising) create a desirable attraction or connection between people and a company’s brand, leading to expanded interaction with the business.

It’s important to understand why Aberdeen was known as the Hub City, how the term was used, and the impact that nickname had on our rapidly growing city. The reality of Aberdeen’s boom, conjoined with the brand nickname Hub City, created a massive economic development magnet, the likes of which we have not seen since. But let’s back up to the beginning.

In his book, A Souvenir of Aberdeen: The Railroad Hub of the Dakotas, the late Don Artz tells the story of why Aberdeen was branded as the Hub City. According to Artz, and confirmed by additional local research, this all came about because a man named Walter P. Butler added the word “hub” to a map he drew.

Butler was a fascinating fellow. He came to Aberdeen in 1881, arriving a few months after the city’s initial platting and just as the first railroad was making it to town. Although he already had a law degree, he also became a surveyor, a draftsman, and, ultimately, the city engineer. Later he became proficient at mapmaking, due to his drafting experience with the Milwaukee Railroad. If you look at maps of Aberdeen and surrounding communities created in the late 1800s, you can generally find Butler’s name on them. 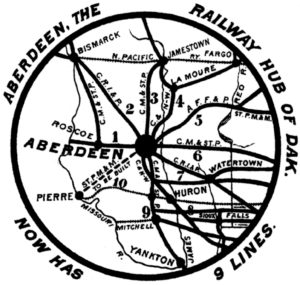 In 1886, Butler drew a small, regional map of Dakota Territory to incorporate the newest railroad to Aberdeen. He noticed the rail lines looked like spokes of a wheel, with Aberdeen being the center, or hub. He added “The Railroad Hub of Dakota” to the map (North and South Dakota became separate states in 1889) and created a frenzy. The Aberdeen Daily News started offering stationery to businesses with the hub map printed at the top and on accompanying envelopes. Aberdeen residents loved the term, and it was quickly adopted throughout the town. The national media separately picked up on this hub concept as it touted Aberdeen’s rapid and impressive five-year initial development. In fact, the media may have preempted Butler’s hub claim by a couple years.

It’s interesting to see on a map that the slightly older city of Watertown also had many railroad lines emanating from it, just like Aberdeen. Yet Aberdeen, despite being platted later, took off and surpassed Watertown in population, hype, and number of businesses. Perhaps the marketing of “The Railroad Hub of Dakota” had more impact on prospectors than simply “Watertown.” Businesses wanted to be in a town at the center of all the action. Who wouldn’t want to locate their business to a place known as The Hub?

Twenty years after The Hub was coined, the nickname was still going strong. In fact, after a Watertown reporter visited Aberdeen for the first time in 1909, he wrote a story comparing The Hub (not Aberdeen) to Watertown, declaring, “Everybody seems consumed with a desire to make their city the best on earth; they talk Aberdeen and even dream Aberdeen! But they have to pay for it. Boosting of the Aberdeen brand comes high and has to be paid for in hard cash, but they seem to be well pleased with their bargain, and it seems to pay. In Watertown we have many public spirited business men who are willing to do much for the city, but there does not seem to be that spirit of enthusiastic sacrifice, that willingness to do everything, to go all lengths that seems to characterize Aberdeen, and which is forcing growth of that city along at a tremendous rate.”

There is no doubt that this nickname, adored by everyone here, was a major piece of the public relations effort put forth by our community founders over 130 years ago. And I don’t think it was a planned campaign. I believe the promotion of the Hub City nickname was an organic phenomenon rooted in every pioneer who wanted to see their interests prosper. They were a competitive bunch, and many believed that Aberdeen had the potential to be the next Minneapolis or Chicago, or at the very least, a capital city. 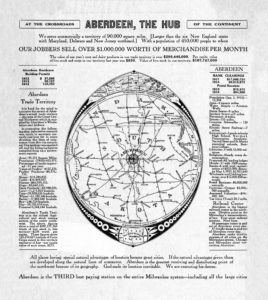 Walter P. Butler didn’t miss an opportunity to promote. This 1915 image represents the backside of the business letterhead for the Narregang Real Estate Company. Early business people were constantly communicating with people back east about land, farming, and business opportunities. Hub City promotions like this were just part of the common effort to keep the Aberdeen momentum going. Butler worked for Narregang, but because this page doesn’t mention a company name, he made this artwork available to any business as he had done prior. Notice several tracks converging on Watertown as well. The term “Hub City” is a brilliant case of brand distinction and set Aberdeen apart from many other cities.

A couple things were going on at this time that could have inspired Butler, and others, to help Aberdeen stand out as a booming brand and enhance the marketing of the Hub City. In the days leading up to statehood in 1889, much lobbying was going on to give a state to Bismarck and a state to Yankton, each having served as territorial capitals. But what about Aberdeen? In 1882, the Aberdeen area produced the most incredible wheat crop ever imagined, drawing more and more pioneers and savvy business folk from back east. The town’s population was skyrocketing, and the hype was spread far and wide by the media. Due to its newly dubbed status as The Hub of Dakota, Aberdeen had desires to be the capital of Dakota, if and when it became a state. People of the region and the widespread media believed that a third state, Central Dakota, should be considered, allowing Aberdeen the capital distinction it deserved if Dakota was to be sectioned off. In fact, the Bismarck Tribune wrote on August 28, 1885, “Central Dakota is a flower in the land. It has over 50,000 people and that she will be heard in future conventions and matters concerning this territory goes without saying. With the development that north and south railroads will give this region, it will be the hub of Dakota in matters commercial as well as political at no distant day.”

Aberdeen was quickly becoming a huge center of commerce with an audience watching from the outside. And the locals bragged about it. Ads were placed in newspapers back east, pamphlets were printed, and businesses incorporated the nickname into their names. Meanwhile, the railroads provided opportunity. Aberdeen was booming, and all eyes were on the Hub City. On June 16, 1888, The St. Paul Daily Globe – Dakota Edition wrote, “Aberdeen, a name in itself pleasant to the ear, is fortunate and attractive in its synonyms. The leading city of central Dakota is known in the territory, in nearly every state of the Union, and in many of the financial centers of Great Britain either as “the railway center of Dakota,” “the distributing and trade center of Dakota,” “the hub city of Dakota,” or by some title equally suggestive and desirable.” The story goes on to say that Aberdeen’s success was not simply because of the railroads that crisscrossed here, but that its fame grew from intelligent business people who capitalized on the commerce opportunities made possible by the trains. The Hub City brand is about business, not trains. 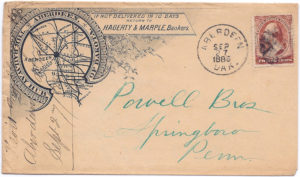 This 1886 business envelope shows an expanded version of W. P. Bulter’s Hub City map. It’s interesting to note that this business stationery emphasizes Aberdeen, not the business, which places greater prominence on community development and recognition than the business itself. (Provided by Ken Stach, Dakota Postal History Society)

I often hear folks declare that our Hub City nickname is no longer relevant because the railroad isn’t ingrained in our psyches anymore. They instantly point to the faded railroad lore, not the economic impact of a commercial, business hub, and dismiss the term. I say they’re missing the point. The Hub City name is an essential, core competency of Aberdeen’s existence. Aberdeen was born of absolutely nothing. Our town’s foundation was a vast, green field of grass without trees and a watery slough, and it was platted by the railroad exactly like thousands of others. Hub City is synonymous with the diverse industry our pioneers invented to create a livelihood for themselves here. Being a hub city motivated them to build their city, make it their own, and then convince others to like it.

Nowadays, do we see that same Hub City buzz that Walter P. Butler and the city’s businesses boasted about for decades? Do we still have that unified, motivating spirit to be the center of our region and proclaim it from the rooftops so everyone knows about it? I’m not going to be so bold as to say dropping the term Hub City caused a disinterest in a common vision, splintering and siloing our business community. Obviously, many factors are at play when it comes to community promotional momentum.

Aberdeen’s population flattened in the 1980s and has shown a gradual up tick since 2000. Many say the decline of the railroad caused this big speed bump of progress and inhibited growth. Perhaps. But we have more transportation options than we’ve ever had before, and we’re still producing goods and services on an incredible scale. Maybe it’s simply a generational phenomenon. The pioneers who so aggressively embraced the term and concept of the Hub City were also building the Hub City at the same time. Later generations benefited from a foundation of government, roads, and infrastructure. Our young sometimes move on to other cities. Many left for the next westward boomtown. Heck, even Walter P. Butler left for Minneapolis.

Thinking about all the pioneers who built a life here, who left a legacy, and who wrote their own story, our current slogan, Write your Story, seems very fitting to motivate a generation to engage in our city. I think it has even more potential. If we asked Mr. Butler what he thinks of the slogan, perhaps he’d reply, “How about, Write your Story – In the Hub City?” // –Troy McQuillen